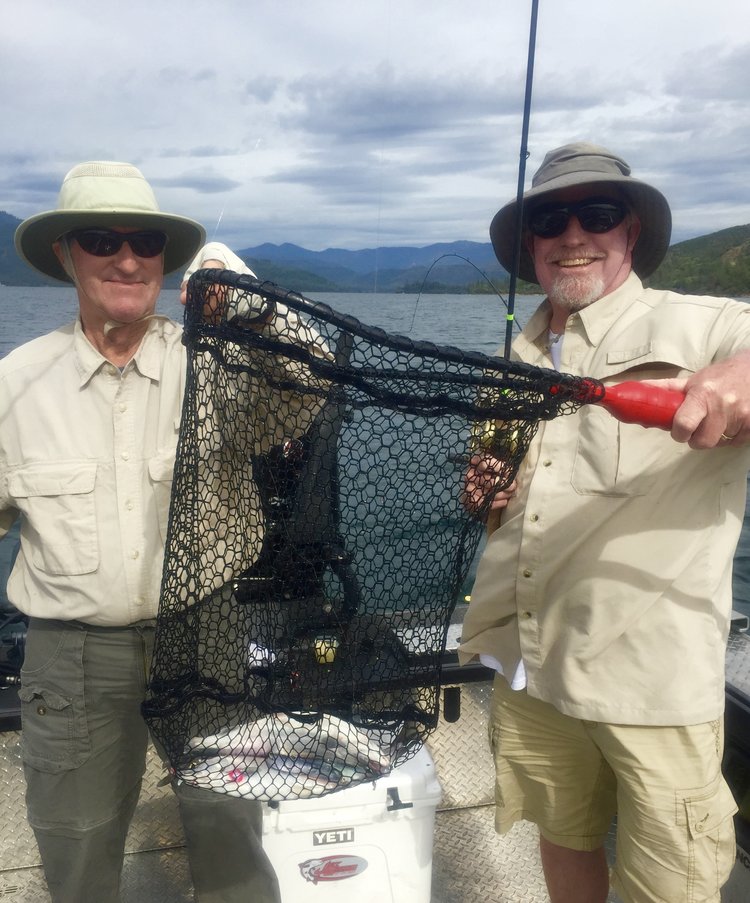 Winter in Northern California can be both beautiful and brutal depending on what kind of weather patterns Mother Nature sends our way.  This winter has been relatively mild and we've seen weather that resembles springtime more than it does our typical winter.  On a positive note, some of our local fishing opportunities do very well in the spring, so it's no surprise that we have been experiencing some great fishing, especially for Kokanee salmon. Kokanee fishing on Whiskeytown Lake is a well known fishery, and every year we see people from all over the west coming to Redding to experience this top notch fishery.  Not only are the Kokanee abundant, but they are some of the finest tasting fish that will end up in your smoker or on the dinner table. With limits of Kokanee set at five fish per person, these 1 lb.- 2 Lb. Kokanee can add up to a nice harvest of salmon fillets.

Living just 15 minutes from Whiskeytown Lake is beyond convenient for me and it's a body of water I guide on a good number of months, especially during June thru August.  Fishing Whiskeytown Lake several months during the year has enabled me to become very familiar with the Kokanee in this lake and my success rates are quite high.  There are a few effective techniques available for catching Kokanee on any body of water that holds them, but Whiskeytown Lake is primarily a troll fishery.  The winter months are quite slow as far as boat traffic and the lake sees very little pressure until late spring when air and water temps start to heat up.  Many days in the winter will only have a boat or two fishing, but come summertime, it's not uncommon to see 10-20 boats trolling for Kokanee.  Whiskeytown Lake has become California's best Kokanee Lake and the increasing fishing pressure is on the rise.  A steady source of water coming into Whiskeytown lake year round, and the pristine spawning habitat in Clear, Brandy, and Whiskey Creeks, provide for the Kokanee populations to remain abundant even with thousands of Kokanee harvested every year.

It's no secret that Whiskeytown Lake Kokanee respond to bait presentations that include shoe peg corn.  I depend on its use to the extent that I wouldn't put my boat in the water if I didn't have it.  I use it on every single bait I send into the water without question, unless I'm trolling small spoons. I believe that the corn presents in such a way that Kokanee are visually stimulated to bite a bait that is rigged with corn.  I also believe that there is a factor that should never be underestimated, and that is the addition of scent to the shoe peg corn.  There are many, many scents out there that people use to add to their corn, but I can tell you that Whiskeytown Lake Kokanee have their favorites.  I go through a lot of corn every year and I don't always have the time or energy to run out to the store to get more scent or shoe peg corn.  Fortunately, the Pautzke Bait Company has developed a superior, readymade, Kokanee corn that is deadly on Whiskeytown Lake Kokanee salmon.  Pautzke Fire Corn comes in a variety of colors and has been specially formulated with the addition of scents and bite stimulants, making Fire Corn the most effective Kokanee bait addition I have ever used.

Kokanee salmon in Whiskeytown Lake primarily feed on Plankton blooms which are abundant during many of the nice sunny days we see throughout the year when water conditions are right.  I believe the addition of krill into the Pautzke Fire Corn is just one of the many things that make this Kokanee corn stand above others, including the competitive brands available on the market.  Plankton is similar to krill so it makes sense that Kokanee would have a tendency to react to baits that contain krill.  The Fire Corn carries a strong scent trail and I have found that just one kernel per hook has been quite adequate to successfully catch Kokanee.  Another feature that I have found to be a stand out when referring to Fire Corn is its toughness.  I've used store bought shoe peg corn in the past and I can tell you that the Fire Corn is far superior in its durability.  It's important that your corn has a toughness to it because Kokanee are known for hitting trolled baits numerous times before actually finding the point of a hook.  They also have soft mouths and will often come off before you even notice a rod bouncing on the downrigger.  I've trolled around a bait for hours while the other baits were getting bit only to find out that the corn on that one bait was gone when I finally pulled it off the clip and reeled it in.

Now, while I prefer to use the natural color Fire Corn, there are days on the water when the Kokanee want another color.  This has been a game changer on many days for me and I always take different colors of Fire Corn with me when Kokanee fishing.  Another thing to consider is that there will be some days when Whiskeytown Lake Kokanee will have a taste for other well known scent additions to the Fire Corn.  I will often add the oil from a can of tuna to Fire Corn.  In addition to, or on its own, garlic is another great addition to Fire Corn some days.  And if that's not enough, I will also add a good dusting of the Pautzke Fire Power (krill powder) to give it an extra krill boost the Kokanee will go nuts for.  Pautzke Fire Corn lasts a long time, and lasts even longer if kept cool during your day on the water.  Because the Fire Corn lasts so long, the added aforementioned scents will soak into the Fire Corn over time and it will become even more potent as you continue to use it.  I always have a few jars on hand with different scents added and I know this often times gives me an edge on the water over other anglers fishing around me.  Give Pautzke Fire Corn a try if you haven't already, I think you'll be impressed with your results.