What Makes A Fish A Successful Invasive? 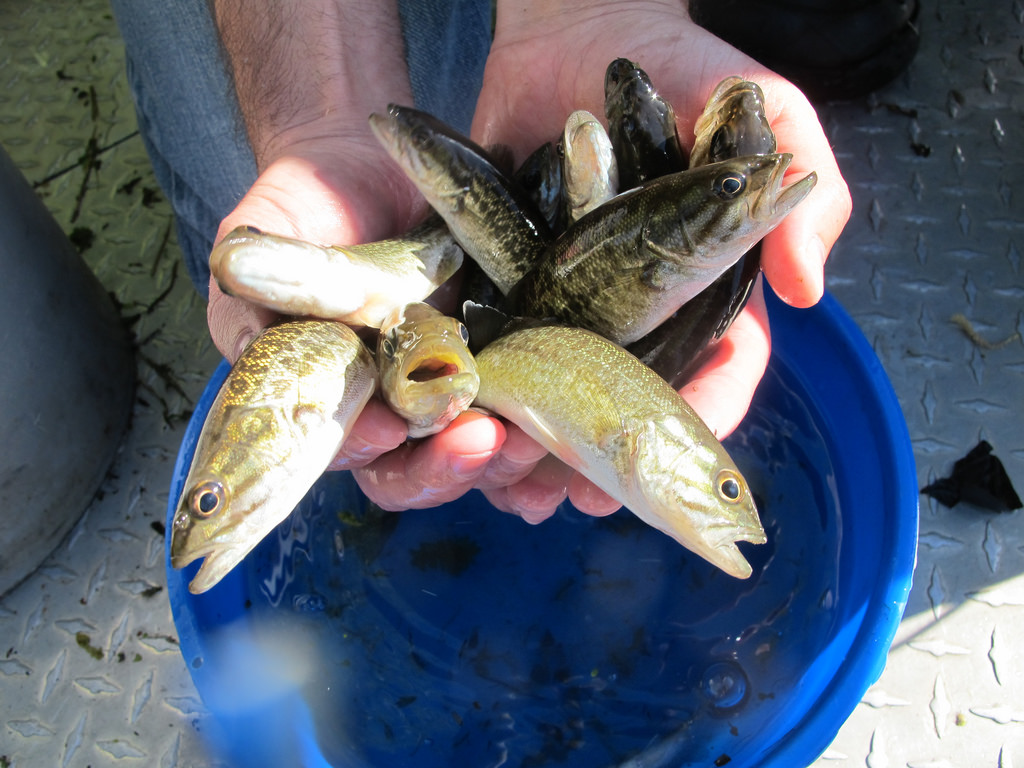 The state of California has seen the largest number of non-native fish introductions in the entire country (161 fresh- and saltwater species; Nico and Fuller 1999), and an estimated 49 nonnative species have successfully established populations in the state’s freshwater systems (Moyle 2002).  However, another 38 estimated freshwater species have been introduced to California, but have failed to establish populations (Marchetti et al. 2004).  What makes a certain species able to invade California waters, while another species fails to permanently establish?  The answer can depend on the species and environment, but a few clear traits have emerged that distinguish successful nonnative species in California, including high parental care of young, long-lived individuals, a wide range of physiological tolerance, and predatory behavior.

The path to invading a new river or lake was historically tricky for fish, especially when needing to cross land.  In the last century, however, potential invaders have greatly benefited from human-assisted transportation and altered waterways, both of which have led to rapidly increasing rates of accidental and intentional introductions, as well as successful invasions. Accidental introductions of nonnative species occur when individuals are unknowingly transported and released into new environments, such as in the ballast water of ships. Intentional introductions, however, are performed knowingly, and typically revolve around stocking sport fishes, whether legally by fisheries professionals or illegally by private citizens.

Whether accidental or intentional, invading species have to navigate through three distinct stages of invasion before becoming permanent fixtures of a new environment: establishment, spread, and integration (Moyle and Marchetti 2006). The initial, and temporary, establishment of a species relies on the invader’s ability to merely survive in the new environment long enough to reproduce. From there, the continued survival and spread of their offspring into new areas of the environment ensures the long-term survival of the species. Eventually, as the spawning, survival, and spread of offspring continues, the invader becomes integrated into the community so thoroughly that it responds to environmental conditions (like floods or droughts) and other community members (such as through predation or competition) in ways similar to the native or pre-invasion community.

Overall, species that have garnered human interest and have previously invaded other regions are more likely to successfully invade California waters. For example, largemouth bass are not native to California, yet have successfully invaded a large portion of the state due to human interest in fishing for them. Likewise, striped bass were historically so prevalent in the Delta that a commercial fishing operation developed around them, and waterways were managed for their success. Biologically, species that exhibit parental care of offspring (such as nest-guarding by adults), have a wide range of physiological tolerance, are long-lived, and are predatory have a much better chance of becoming established in California waterways (Moyle and Marchetti 2006). For instance, species that can tolerate a wide range of temperature and dissolved oxygen conditions, such as carp, can easily survive in almost any aquatic environment, and are especially fond of human-altered waterways. Further, species that exhibit parental care of offspring, such as smallmouth bass, ensure their young are given the best opportunity to survive to maturity by protecting them from predation, and preventing them from dispersing into hostile environments while young and vulnerable. Finally, fish that are long-lived and predatory, such as northern pike, have more opportunities for successful spawning, and benefit from typically naïve prey that are not conditioned to avoid the new predator (these are two reasons why the California Department of Fish and Wildlife has swiftly and repeatedly attempted to eradicate northern pike when they are found in California waters; Moyle 2002).

Predicting the success of an invader can be tricky, and sometimes isn’t recognized until after the species is fully established in California waterways. For example, the bigscale logperch was not even described as a distinct species when it was first introduced to California, and was not predicted to become a potential invader based on characteristics of similar species (Moyle and Marchetti 2006). However, this fish is now widespread throughout the state (Moyle 2002). Many factors contribute to the success of invaders, but almost all studies agree that the most common invaders are those that are desirable to humans (Moyle and Marchetti 2006). Whether for sport, food, prey, business, or other reasons, a helping hand from humans will almost always ensure a successful species invasion.

FISHBIO is a dedicated group of research scientists, engineers, and technicians that specialize in counting, tracking, and analyzing trends in fish and wildlife populations throughout the world. An expert staff, technical capacity, and state-of-the-art equipment make FISHBIO a trailblazer in aquatic research. For more information, please visit FISHBIO.com