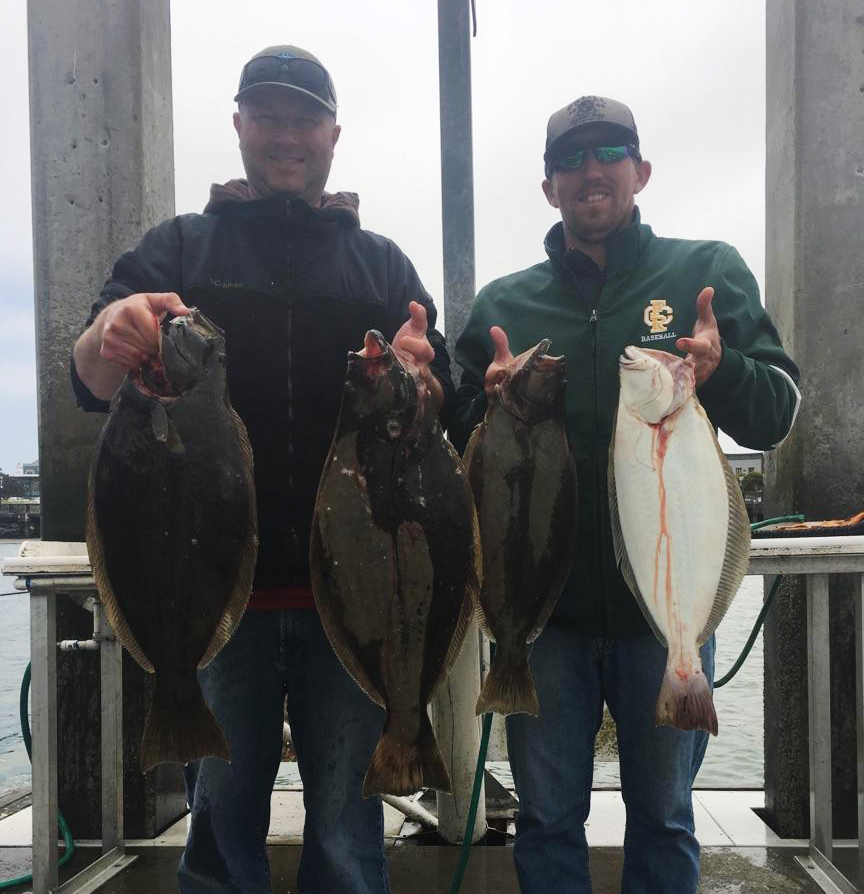 Humboldt Crabs baseball coaches Robin Guiver, left, and Ryan Dettman made the most of their day off on Monday. The angling duo scored limits of California halibut while fishing in Humboldt Bay. Photo courtesy of Mike Stratman/Redwood Coast Fishing.

Tuna fever is spreading quickly amongst Humboldt County saltwater fishermen. There’s warm water sitting off the coast of Eureka, and there’s patches lined up all the way to Charleston, OR., giving anglers a few different options. A small three-day weather window opened up for Eureka on Wednesday, and a few boats made the 27-mile run straight west to the where the water turned 60 degrees. Tim Klassen of Reel Steel Sport Fishing was one of the boats to venture out and boxed 11 albacore in the 12 to 20-pound range. Most of the other boats fishing in the same location landed a few fish as well.

Quite a few local boats opted to tow to Charleston on Tuesday, taking advantage of some really good fishing and calm seas. Boats put up some good scores over the weekend, prompting anglers to head for more of a sure thing. All signs are pointing to a really good tuna season along the North Coast. After a couple of subpar years, it feels good to get the fever back.

Marine Forecast
Following a short reprieve from the wind, it looks like it will be back for the weekend. Out 10 nautical miles from Pt. St. George to Cape Mendocino, Friday’s forecast is calling for 5 to 15 knot winds out of the NW and NW waves 3 feet at 5 seconds. Saturday is calling for NW winds 10 to 20 knots and waves out of the NW 7 feet at 7 seconds. Sunday’s forecast is a little worse, with winds out of the NW 10 to 15 knots and waves 8 feet at 9 seconds. These conditions can and will change by the weekend. For an up-to-date weather forecast, visit weather.gov/eureka/. To monitor the latest Humboldt bar conditions, visit wrh.noaa.gov/eka/swan, or you can also verify the conditions as reported by looking at the bar cam at wrh.noaa.gov/eka/barCam/?cam=humboldtBayBar. You can also call the National Weather Service at 707-443-7062 or the office on Woodley Island at 707-443-6484.

California halibut remains wide-open
The California halibut action is still wide-open within Humboldt Bay, with limit-style fishing the norm. Boats drifting live anchovies in the north and middle channels are finding easy limits. Reportedly, there’s quite a few more keepers around now as well. The daily bag and possession limit is 3 per person. The minimum size limit is 22 inches total length.

The Oceans:
Eureka
The wind has been the story out of Eureka this past week reports Tim Klassen of Reel Steel Sport Fishing. “We haven’t been able to get offshore this week. It’s been too rough to make it all the way to the Cape, and with halibut closed, there isn’t much going on. The California halibut inside Humboldt Bay is still producing limits for boats, with more keepers starting to show up. The ocean is forecasted to lay down Wednesday through Friday, so we’ll be trying to find some Tuna,” Klassen added.

Trinidad
The rockfish and ling cod are really on the bite reports Curt Wilson of Wind Rose Charters. “The weather and ocean has been pretty good up here, so we’ve been able to get out into some deeper water where the fishing has been excellent. Straight out in 100 to 120 feet of water has produced some quality lings in the 20-pound range as well as a variety of rockfish,” Wilson added.

Crescent City
Ocean conditions have improved the last couple days, and the rockfish bite is still going strong reports Chris Hegnes of Crescent City’s Englund Marine. “It’s been kind of quiet, but the locals are still catching some nice rockfish and lings at all the usual spots. We did weigh in a 34-pound ling this week, so there’s definitely some big ones out there. I also heard some good Redtail perch reports coming from the mouth of the Klamath.” Hegnes said.

Shelter Cove:
The rockfish bite has been a bit inconsistent with Captain Jake Mitchell of Sea Hawk Sport Fishing saying, “One day we'll get limits of rockfish and lings fairly quickly, and the next day we'll struggle a bit. It seems the only thing consistent lately has been the wind as it’s forced us to stay pretty close to home. There have been a few California halibut showing in the harbor as well lately. After getting our limits of rockfish and lings on Tuesday, we spent an hour and a half in the harbor and landed three halibut to 12 pounds while losing a couple others.”

The Rivers:
Lower Klamath
Most of the action has now moved to the estuary where a handful of salmon are being caught each day by boats trolling Kastmasters. The number of fish and the bite seems to be improving each day. The best action has been at first light and then an hour prior to high tide.

Junction City weir update
The Junction City weir will be installed on Monday, July 24 in the same location as previous years, near Evan’s Bar. The first TRP weekly trapping summary should be out one or two weeks after installation. Installation dates for the Willow Creek weir have yet to be determined. Questions about the weirs should be directed to John.Hileman@wildlife.ca.gov.