Summer salmon fishing has really taken off the past few weeks here in the Redding area and anglers are seeing some of the biggest Kokanee salmon in years.  I had heard that even Trinity Lake, which is known for small Kokanee, has been containing some larger than normal Kokanee this year.  I had a short break in my schedule from Whiskeytown Lake this week so I thought I would head up to see if the Trinity Kokanee were as big as the reports had described.

Another local guide, Anthony Cox, and I made an early morning trip up to Trinity Lake and launched at Fairview boat launch.  With my rods already rigged for Whiskeytown Lake Kokanee, my prep time was short and we were fishing within ten minutes of launching. I dropped down as we headed towards Trinity Dam and within a few minutes had a Kokanee pulling on a rod.  Anthony quickly landed it and it was a disappointing 10" inch class Kokanee.  We caught three or four more small Kokanee and my doubts about the big Kokanee I had heard of, became very real.

After trolling the face of Trinity Dam with nothing but a few short Kokanee, we decided to troll into the Papoose Arm of Trinity and see what we could stir up.  The sun was low in the sky but was on the water now and the bite turned on.  We proceeded to catch numerous Kokanee and even experienced a few double hook ups.  The same tactics used to catch Whiskeytown Lake Kokanee were working very well on Trinity as well.  The majority of our Kokanee came at 50'-55' feet.  I was marking some fish down at 85' feet and believed them to be kings so I dropped one rod down to try to get one to bite.  It wasn't but a few minutes later, I had a good take down on my King salmon gear.  I was fighting a Kokanee I had hooked at 55' feet so I had to let the 85' foot rod bounce while I played out the Kokanee I already had on.  After landing that nice sized Kokanee I picked up the other rod.  I lost that fish before It got to the surface.  Excited to get a bite down in King salmon territory, I sent the line back down again to 85' feet.

Just a few short minutes later my deep rod started to bounce again.  I was just sure I had hooked a King salmon, but when I got the fish to the surface, I was surprised t see that it was a Kokanee.  Oh well, I guess there were Kokanee dawn at 85' feet too!  As we approached the 11:00 hour, Anthony hooked a nice King of about 2 lbs and landed it.  We landed another Kokanee salmon or two and just about had our 20 fish limit.  I had brought the King salmon rod up to 50' and had my other rod at 55' feet.  My rod at 55' feet went down and I expected another Kokanee.  After fighting this fish to the surface, I was surprised to see that it was a nice bright King salmon.  Another fish or two and we had our limits.

I was delighted to see the quality of the Trinity Lake Kokanee and would say they averaged 14"-15" inches.  The Kings we caught were small, but I have to admit that when we started to catch so many nice Kokanee, we lost our focus and didn't give the Kings much effort. all in all it was a very productive trip and I am looking forward to heading up to Trinity Lake again very soon! 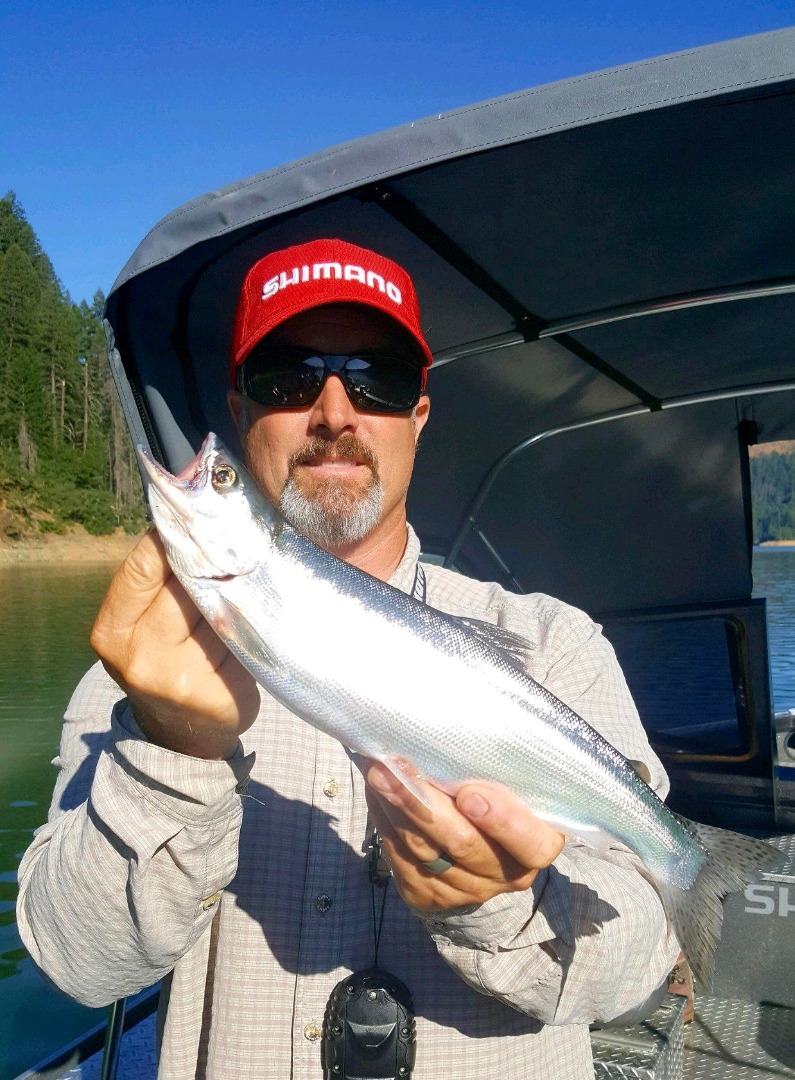