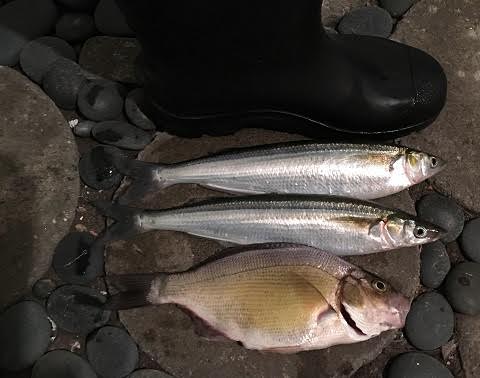 Surf and fish at Ocean Beach

If you’re on a beach in the Northern California area, there’s a palpable tension in the air. Summertime is historically striper-time and surf fishermen (and surf fisherwomen, of course) are increasing their presence on the beach.  Both the skilled and the lucky have been hooking up here and there, but the general consensus is that the season is just getting underway.  The bulk of what we will know about the 2017 summer striper season still remains to be written.

With this in mind, I simply want to be on the beach at the ideal times, regardless of how long I can actually spend fishing.  This past Sunday evening was a time where I looked at my tides app, looked at when the sun would set, checked how hard (or how soft) the wind was blowing on shore, and made the determination that now would be good time to wet the line.

I wasn’t gearing up in a big way, I just wanted to walk down to the beach from my house in some rubber utility boots and toss my Carolina rig into a promising channel for an hour or so.  It was a small trough parallel to the beach that flowed into a larger outflow.  It looked fishy to me and, even if not, the worst case scenario was that I’d get to watch a colorful sunset in relative comfort. While most of inland Northern California baked in 90 and 100+ degree temps., Ocean Beach, in San Francisco, was a perfect 72 degrees.  As I tossed a 4” artificial sandworm, happy people continually strolled by.  Some would ask me questions:  what are you fishing for?  have you caught anything yet?  what’s up with all these crabs?

I’d answer questions, but I was really there to just fish.  On the second cast, I hooked a surfperch. It fell off the hook because I forgot to set the hook well enough.  My fault for starting off in such a mellow mindset brought on by the beautiful surroundings.  Focus, Jerry, focus. Eventually, I would get another nice sized surfperch and a couple of jacksmelt.  And I inadvertently snagged three Dungeness crabs as I would always be in retrieve mode with the Carolina rig.  Frustrating because each time my rod bent pretty far giving me a brief hope that a striper was just caught (I’ve caught stripers before using just this modest set up).  After tossing each crab back I’d toss out the worm again and get some more hits or a hook up.  I would be home before dark.

So, I did what I wanted to do, which was take advantage of conditions that I thought were optimal for productive fishing.  The next time, I’ll be more geared up for striper, though.  I like catching any kind of fish, but there’s nothing like a strong striper bending the rod toward the horizon.  I’ve still got lots to learn in identifying promising underwater structure, choosing appropriate lures or bait, and refining my fishing technique.  But I’ve got a lot of motivation and, hopefully, enough time on my side to achieve my modest fishing goals.  I hope to share the progress in the coming weeks and months!

Jerry Back is a television research executive residing in San Francisco, California. Other outdoor interests include fishing for Striped Bass (a.k.a., “stripers”) and anything else he can catch on the beaches of San Francisco. Jerry can be contacted at jerry.back@gmail.com.

Jerry also wrote an article for MyOutdoor Buddy titled "How to Catch Dungeness Crab with Rod and Reel," which can be found here.  An archive of his recent articles published on NorCal.Fishreports.com can be found here.