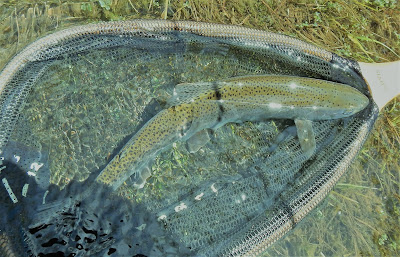 For whatever reasons the Federal Water Master had tamped-down the spigot into the Truckee River at Tahoe City starting August 5th from 250cfs to 70cfs! With all the water received this record winter of 2016-'17; I'd predicted great flows on the BT August through September...eliminating the "Dog Days of Summer". This unanticipated ramp-down lasted for a several days.  Now the flows out of Tahoe City are at 230 cfs...BUT...34% below the historical 350 cfs.. I have no idea what the Feds are thinking.

The current "up-side" is that flows along Glenshire Drive through Farad in the "Grand Canyon of the Truckee" are above historical average flows. This fact mitigates the severe ramp-down from Tahoe City earlier in the month.

As for the BT water temps can still be an issue. I'm suggesting once you get a water temp of 66 think about leaving the water relative to potential stressing of the trout. HINT: 1) Do remember there will be a couple of degrees differential below each reservoir inflow (Prosser & Boca) and 2) Look for the cooler water emanating from the spring seepages; trout will congregate below them. 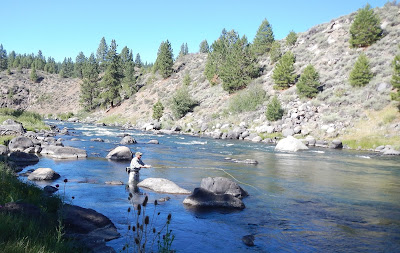 in the "Upper Canyon"
We've been fishing in the AM's and at dusk. Early in the day we're probing pocket water with dry/dropper rigs; for smallish RainBows and Browns..no bragging-size that I have  observed first-hand or with clients.. In the deeper runs and heads of pool spill-ins  use indo-rigs or tight-lining. First-hand-wise via personal or guided angling there have  been; no bragging -sizetrout

As usual generic patterns early on and later , as the sun sets, you may need to get more specific relative to rising fish you may see...remembering "Size Matters" and shape and color...if possible, secondary. You'll see numerous bugs in-flight; caddis, stoneflies and mayflies; ranging in size #14-#18. The underutilized  bug imitation, wet or dry, is the Saddle-Case caddis
(Glossosoma)...it is present but unnoticed...

As for the LT, water temps are not an issue; being a tailwater. Nice flows at 12cfs. PMD hatch has faded after a progressively, later-in-the-day, prime-time emergence period. 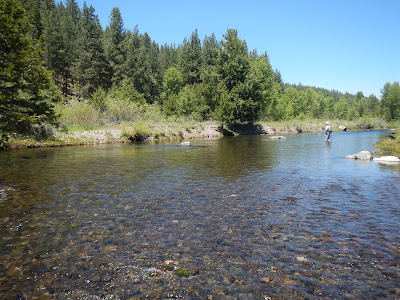 Casting to Surface Feeders during the PMD Hatch
Now we're observing a scattering of mayflies and caddis during the day. Best times seems to be in the early AM's and PM's. The Little Western Green Drake (Flavelina) is present in the late afternoon. Matter of fact a 20" RainBow was fooled by a #12 traditional, "Catskill" Flav tye last Friday. During the six-week PMD  emergence RB's to 19" and a hefty, lady 21" Brown ate emergers at the surface.