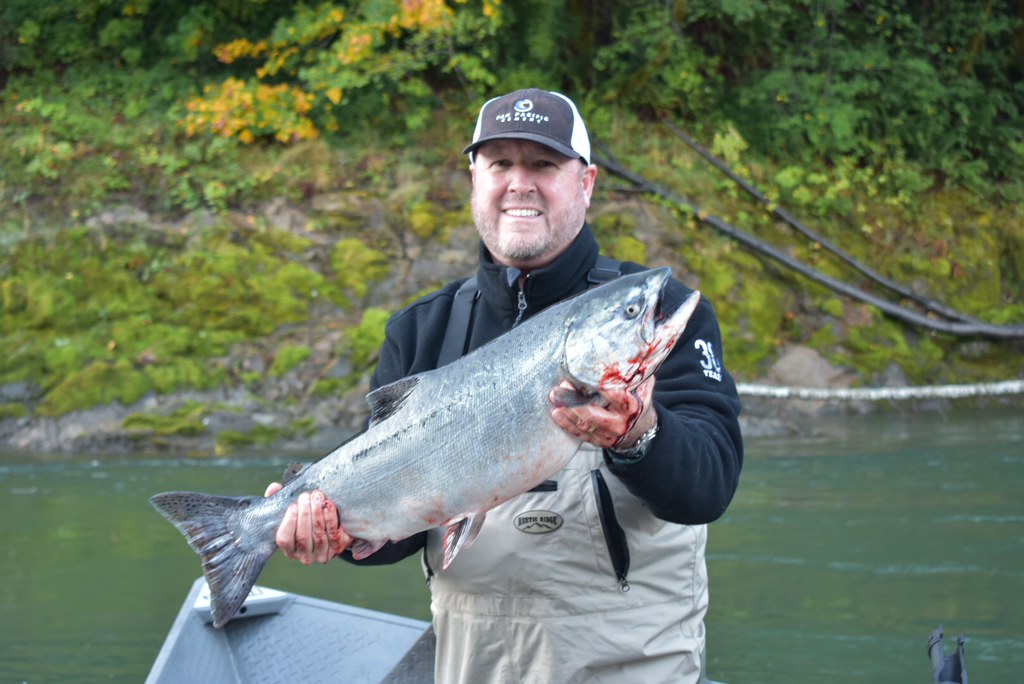 The season’s first real storms are currently drenching the North Coast and putting rivers on the rise, and it looks like there’s plenty more of the wet stuff on the horizon. If the forecast holds, we should see enough rain in the next few days to open all of the rivers to fishing that are currently closed due to low flows. This includes the Eel, South Fork Eel, Van Duzen, Mad and Redwood Creek. The Smith has been open to fishing since last week, but it was low and clear up until Wednesday afternoon. According to Ryan Aylward of Eureka’s National Weather Service, we’re in for some wet days ahead. “Between Wednesday and Friday, the Smith basin could see up to five inches of rain,” said Aylward. “Here locally, the Eel and Mad basins could get up to three and a half inches. Saturday is looking mostly dry, but the rain will return on Sunday and we’ll see some pretty significant rainfall totals into next week.”

Weekend weather and marine forecast
According to Aylward, we can expect the rain to continue on into next week. “Monday we’re looking at another half to an inch, with the rest of the week looking very wet.”

Sport crab update
The sport Dungeness crab season kicked off this past Saturday, and those who ventured offshore reported the crabs were plentiful and good-sized, but definitely on the light-side. Captain Tim Klassen of Reel Steel Sport Fishing set gear south of the entrance this week in 100 feet of water and reported 20 to 40 keepers per pot following a two-day soak. “The reports are good for boats fishing both north and south of the entrance,” added Klassen. Opening day reports from Trinidad were about the same as Eureka – plenty of crabs, but they’re light. Up north to Crescent City, Chris Hegnes of Englund Marine reported that the crabs are thick, but also really light. “Straight out of the harbor in 80 to 90-feet of water was one of the top spots along with the full length of South Beach. There is a huge volume of crab out there, and a short soak on the opener produced up to 30 keepers per pot. Crabbers also did well inside the harbor,” Hegnes added.

Pre-season crab quality test results
The first round of meat yield tests are complete, and the crabs are definitely on the light-side. Crescent City came in at 17.6%; Trinidad 15.3%; Eureka 16.1%. Crabs need to be at 25 percent prior to commercial harvest. The next round of testing is scheduled for some time prior to Dec. 7. For more info and test results on commercial Dungeness crabs, visit www.psmfc.org/crab/

Willow Creek weir trappings
For the trapping week of Oct 29 through Nov. 4, only one Chinook jack was trapped at the weir. To date, 865 jacks have been trapped compared to 69 for the entire 2016 trapping season. This past week, 11 adult Chinook were trapped, bringing the season total to 1,026. In 2016, only 459 total Chinook were trapped.

The Rivers:
Smith River
Fishing was decent over the weekend, but should really improve as we’re finally getting our first big rise of the season reports Mike Coopman of Mike Coopman’s Guide Service. He said, “The river fished really well on Monday, but Tuesday was tough.  Conditions are really going to change over the next few days. The river is going to rise by about 7,500 cfs on Thursday, which should give us a more stable drop. We’ve had some sharp rises, along with sharp drops, which can make for tough fishing. We haven’t seen a lot of big fish yet, hopefully that will change in the next few days. The wind, coupled with a rising river, means we’ll be cleaning a lot of leaves off the lures. Looking at the 10-day forecast, we might see rain on six of those days. The river should really stabilize and I expect the fishing to be really good.”

Reminder: A North Coast Salmon Report Card is required to fish for salmon on the Smith River. The daily bag and possession limit is 1 Chinook salmon and no more than 5 wild Chinook salmon over 22 inches per year.

Chetco/Elk/Sixes
“The rain in the forecast for last weekend was a lot less than expected, so the river stayed low and fairly clear,” said Andy Martin of Wild Rivers Fishing. “Fishing was slow for the most part. There are a lot of dark fish up high, and the lower river has plenty of bright fish, but there is not a lot of current for plugs or back-bouncing. Lots of people were anchoring, so the best holes were tied up. The guides on the river late Tuesday got into some nice fresh fish during the afternoon tide. There also was a fair bite in the estuary. We should have really good fishing this weekend with the big storm expected Wednesday and Thursday. The roads are covered with leaves, so plugs will be effective this weekend, but people will need to clean their lures regularly. The Elk and Sixes never got to driftable levels this week. The forecast looks good for the weekend, but expect a crowd, as the first major high water event draws a ton of out-of-the-area boats. This will probably be the best weekend of the season, however, on the Elk.”