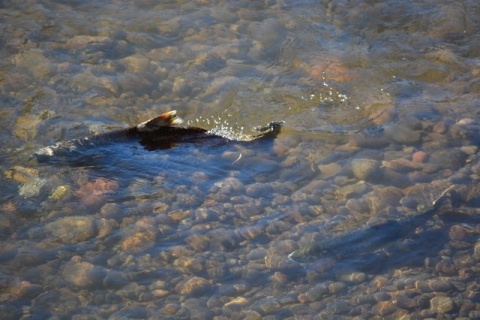 This is an excerpt from “Stakeout at Battle Creek,” a chapter in my recently released sequel, The Game Warden’s Son.

I’m sometimes asked if I had any favorite places to work during my twenty-one years supervising the warden force in western Shasta County. Lower Battle Creek immediately comes to mind—from the mouth, where Battle Creek flows into the Sacramento River, to the barrier weir at Coleman National Fish Hatchery.

Every fall, from mid-September to early November, this three-mile stretch of Battle Creek would come alive with fall-run Chinook salmon. Right behind the salmon were the poachers—some by day and some by night—with fist-sized snag hooks, dip nets, spears, gaffs, and pitchforks. Many’s the year we had to practically stand guard on this extraordinary stream and its anadromous visitors.

I often parked my patrol truck and hiked the trails and footpaths running the length of lower Battle Creek, many of them created by decades of illegal activity. Quietly passing through this riparian paradise, I was in constant awe of the giant native sycamores and majestic valley oaks that grew along the shoreline. Every break in the vegetation offered a window to Battle Creek itself—its reflective surface decorated with brilliant fall colors, its gravel bottom excavated with salmon redds laden with fish eggs, its waters alive with the sights and sounds of salmon splashing their way upstream.

Although I was involved in countless salmon-related investigations on lower Battle Creek, two nights in late October 1986 will remain fixed in my mind forever.

It all started early one morning with a phone call from the Coleman National Fish Hatchery. Warden Merton Hatcher, a tall gray-haired veteran who had worked Battle Creek and the surrounding area for many years, answered the phone in the squad room at the Redding Fish and Game office.

“Mert, this is Jack, down at Coleman Hatchery.”

“Somebody snuck into the hatchery late last night. From the looks of all the eggs scattered around, they took several salmon.”

“Where exactly did you find the eggs, Jack?”

“All over the rocks and up the bank, at the southwest side of the barrier weir.”

“Thanks for the call, Jack. We’ll be right out.”

I happened to be in the squad room when Warden Hatcher took the call, so he and I responded and began examining the evidence. As the hatchery employee had described, bright red salmon eggs were scattered in the rocks and up the bank, immediately south of the hatchery’s entry pond and egg-collecting station.

“These guys couldn’t have been too smart,” I said. “They left a trail for us to follow.”

“Yeah, look at this.” I began walking from the hatchery’s southwest boundary, following fish eggs as I went.

“Maybe it was a bear,” joked one of the hatchery employees.

“Bears don’t wear tennis shoes,” I replied. “Looks like we have at least two culprits. See, there’s a couple eggs over there, a few more here, and six or seven up ahead. You can even see impressions in the dirt where they dragged a bag or a fish across the ground.”

With most of the Coleman Hatchery employees living in government housing on the hatchery grounds, Hatcher and I figured the poachers were slipping in after midnight, when everyone was asleep. We decided to pull an all-night stakeout, beginning that same evening.

Warden Hatcher dropped me off at the metal gate about 11:00 p.m. Equipped with a flashlight, a handheld radio, binoculars, and a warm coat, I quickly climbed the steep hillside north of Coleman Fish Hatchery Road. Hatcher continued toward the fish hatchery, where he would hide his patrol vehicle and wait for any signs of activity.

Plodding up the hillside through the poison oak, buckbrush, blue oaks, and dry grass, I reached a clearing fifty yards above the valley floor. From my lofty lookout, I could see the streetlights at Coleman National Fish Hatchery, a half mile to the east. Directly below me were the road, the metal gate, and a well-worn trail leading across an open field to Battle Creek—all of which were barely visible under a waning gibbous moon.

With my flashlight turned off and my size-eleven Hi-Tech boots braced against a half-buried lava rock, I leaned back against the steep hillside and stared into the darkness for the next six hours. . . .

The sun was just coming up when I spotted something prancing across the open field in my direction. . . .