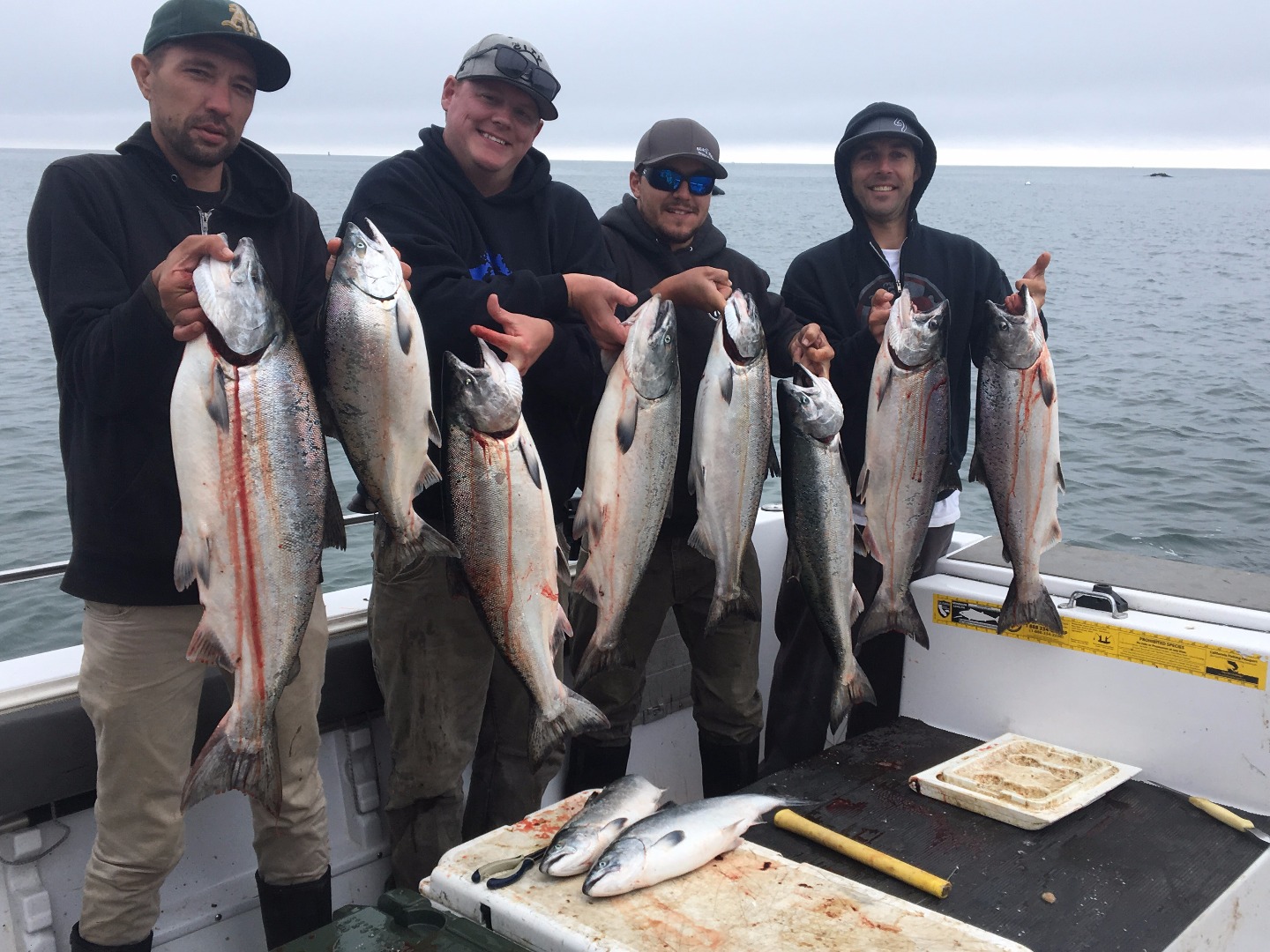 Our neighbors to the south are currently enjoying a pretty good salmon bite. Charter and sport boats alike have scored limits since the weekend on some very nice sized kings. Out of Shelter Cove, Jake Mitchell of Sea Hawk Sport Fishing mooched up limits of salmon for his customers on Tuesday fishing in 60 feet of water. A few sport guys also did well mooching over the weekend. The bite out of Fort Bragg has been good since the opener, with quite a few limits being reported. Most of the action has been from the Whistle north to Laguna Point. The fish are hugging the bottom, with the successful boats fishing in 80 to 100 feet of water and their downriggers nearly bouncing off the bottom.

Watching from the sidelines as kings are flying over the rails from the Bay Area north to Shelter Cove hasn’t been an easy pill to swallow. It really makes you appreciate how good we had it the past five or six seasons. With any luck, we’ll know that feeling again soon.

Marine forecast
The ocean conditions weren’t very pretty last weekend and that trend continued early this week. The ocean did come down on Wednesday, but it looks like it’s on its way back up for the weekend. Out 10 nautical miles north of the Cape, Friday’s forecast is calling for NW winds 5 to 15 knots and waves out of the NW 7 feet at 8 seconds. The wind decreases slightly on Saturday, coming out of the NW 5 to 10 knots. Waves will be NW 6 feet at 9 seconds. Sunday is looking similar, with NW winds 5 to 10 knots and waves NW 5 feet at 8 seconds and NW 3 feet at 12 seconds. These conditions can and will change by the weekend. For an up-to-date weather forecast, visit weather.gov/eureka/. To monitor the latest Humboldt bar conditions, visit wrh.noaa.gov/eka/swan, or you can also verify the conditions as reported by looking at the bar cam at wrh.noaa.gov/eka/barCam/?cam=humboldtBayBar. You can also call the National Weather Service at 707-443-7062 or the office on Woodley Island at 707-443-6484.

Halibut season re-opens Sept. 1
The Pacific halibut season will re-open next Friday, September 1 and will remain open through Oct. 31, or until the quota is reached, whichever is earlier. Through August 20, the CDFW has projected 27,989 net pounds have been harvested towards a quota of 34,580 pounds. For up-to-date harvest tracking information, visit wildlife.ca.gov/Conservation/Marine/Pacific-Halibut#31670772-in-season-tracking

Klamath/Trinity regulations
A reminder that the Klamath River is currently closed to salmon fishing, and the Trinity will be closed as of Sept. 1. During the salmon closures, both rivers will remain open to steelhead fishing. A couple of good rule of thumbs with regards to the salmon closure. When you’re fishing for steelhead and you catch a salmon or two, it’s a good idea to either move or change up your gear or method. If you do hook a jack or an adult salmon, it is illegal to remove them from the water by any means. Trolling the estuary, fishing red-cured bait in deep holes, or backtrolling large Kwikfish are some of the methods employed to catch Chinook. These techniques, while not technically illegal, will be frowned upon during the closure and will likely increase your chances of contact with law enforcement. For the complete list of Klamath/Trinity regulations, visit dfg.ca.gov/FileHandler.ashx?DocumentID=147891

Trinity River salmon trappings
For the week of Aug. 13 through Aug. 19, 27 Chinook salmon were counted at the Junction City weir. Of the 27, 10 were jacks and 17 were adults. To date, this trapping season, which began on July 23, 65 adults and 18 jacks have been counted. The Junction City weir was taken out by a large tree on Monday night, which likely means no trapping will take place this week. The Willow Creek weir is not yet in the water, but could be back in business this week with trapping starting on Aug. 27.

The Oceans:
Eureka
It’s more of the same for the Eureka boats. Pacific halibut is still closed and the ocean’s been too rough for a Cape run. The saving grace continues to be the California halibut fishery within Humboldt Bay according to Tim Klassen of the Reel Steel Sport Fishing. “There’s still a lot of fish around, including lots of undersized fish. The bite slowed a little this week, due largely to the big tide swings. I don’t think they bite as well when there’s a lot of water moving, it seems like they hunker down until the heavy current subsides. It looks like the ocean might be good enough this weekend for a Cape run, but we’ll have to wait and see. The tuna water that had been sitting straight west of Eureka has broken up, hopefully the water that sitting off of Fort Bragg will move south so we can get another shot at some tuna.”

Trinidad
Trinidad has been pretty quiet lately reports Curt Wilson of Wind Rose Charters.  He said, “The weather hasn’t been great, the tourism has slowed, and halibut won’t open until next Friday. There isn’t a whole lot going on, but the regulars are still going out and catching a few rockfish and some lings. Once halibut opens back up, we should see some more activity.”

Shelter Cove
“Salmon fishing had been pretty slow this past week for us,” said Captain Jake Mitchell of Sea Hawk Sport Fishing. “We had been averaging about 3 fish per day until Tuesday. On Tuesday, the fish finally turned on and went on the bite. We had our 10-fish limit by 1 p.m. We have been mooching them up in Bread N’ Butter in 60 feet of water. The fish have been a pretty fair grade with about a 12-pound average. Rock fishing was pretty mediocre this week but we also didn't spend as much time on them with more of the effort concentrated on salmon. Conditions look a bit rough until Saturday, but should still be fishable.”

Crescent City
‘With the ocean being rough and the halibut closure in effect, it’s been pretty quiet here said Leonard Carter of Crescent City’s Englund Marine. “I don’t think there was much happening over the weekend. The ocean laid down on Wednesday and some boats went out, but I didn’t hear how they did. Things should start to pick back up a little once the ocean comes down.”

The Rivers:
Lower Klamath
The water coming down from the Trinity hit the lower river, peaking at 5,200 cfs early Wednesday morning. The steelhead fishing was excellent over the weekend, and it will likely pick back up once the river settles. With the salmon closure, fishing pressure has been light. The few boats that are out have reported really good steelhead fishing while fishing the riffles from Blue Creek down to Blake's. Reportedly there’s quite a few adults around, with some nice hatchery fish in the mix as well.