If you fish for winter steelhead, sooner or later it’s going to happen. You’re working a run that you know holds fish. Your presentations are flawless. Your drifts are impeccable. You throw everything in your fly box at the steelhead, but the fish don’t give your flies so much as a sniff. Sometimes the steelhead randomly porpoise, as if to taunt you: “Yes, we are here, and no, we’re not interested. Go home.”

I won’t pretend that I’m an authority on the feeding habits of steelhead. In fact, I’m probably quite the opposite. No other species I fish for has been the source of more personal angst. But I can say this. When I’m having one of those days, I’m not afraid to ditch the patterns fish expect and readily embrace something more seductive: a soft-hackled fly.

Using soft-hackles to catch steelhead isn’t new. The late Sylvester Nemes wrote of fishing classic wets like the Partridge and Orange, tied several sizes bigger than what he used for trout, and rated their performance as “brilliant.” Nemes was just one of many devotees of the soft-hackled fl y for steelhead. You can see the influence of traditional wet flies in the patterns of masters like Bob Arnold, Randall Kaufmann, and Bill McMillan, just to name a few.

While all the flies I’ll cover have roots in traditional design, the way I’m fishing them is decidedly untraditional. True, swinging a soft-hackle on a greased line is pure poetry. Unfortunately, it’s also a low-percentage play for catching Great Lakes winter steelhead. You want to present your flies where the fish are. And the majority of the time, that’s going to be along the river bottom. I can hear the purist anglers howling, but that’s okay. When I have to make a 10-hour drive and stand in 33-degree water for nine hours in swirling lake effect snow, purism can wait.

Whether you choose to fish with an indicator or not, get your flies deep and in front of steelhead and let the fly swing (photo by Barry and Cathy Beck)

The Logic Behind Soft-Hackles for Steelhead

Anglers frequently tend to overcomplicate matters. You can avoid that pitfall by remembering these four basic considerations:

With those factors in mind, show the fish something different—something that entices them with movement and creates the illusion of life—like a soft-hackled fly drifted along the bottom of the river. The fly may sport fluorescent colors, it may be a pure attractor pattern, or you may tie it in muted natural colors. The point is, whatever soft-hackle designs you’re fond of, you need to present it at a depth where the steelhead are most likely to see, and eat it.

I typically don’t like to incorporate weight into a fly that’s supposed to look alive. So to get my fly down quickly, I rely on weight attached to the leader. The million-dollar question is always, “How much weight?” The Zen answer: Enough to get your fly down to the bottom without hanging up on every cast.

A Soft-Hackle Indicator Rig
My favorite setup employs a six- to eight-foot piece of 10-pound Maxima line under an acrylic yarn indicator. At the end of the leader I tie on a size 10 SPRO Power Swivel; then a two- to three-foot long piece of 6-pound Maxima Chameleon or Drennan Fluorocarbon tippet to the other swivel ring. Add or detach shot just above the swivel on the indicator end of the leader as needed. As a rule, I adjust the distance from indicator to shot so it’s 1½ times the estimated water depth I’m fishing. If you’re not ticking the bottom, you’re not fishing deep enough.

Unfortunately, there’s no magic formula to adding weight; it’s simply a matter of trial and error. Also note that some situations call for more shot—think faster, deeper water. Other times, you may want to increase the weight to incrementally slow the drift speed of your flies. Sometimes that reduction in speed is the difference between catching a fish or getting skunked.

Whether to use an indicator or not is purely a personal choice. I’m a huge fan of indicator presentations, especially for steelhead. I can cover far more water with an indicator than when I’m bouncing flies on the bottom. Use the method you’re most comfortable with. If you’re presenting under an indicator, watch it like a hawk. The takes of winter steelhead can be beyond subtle. Look for a reason to set the hook on every drift and remember to check your hook points early and often. Any hook repeatedly traversing the river bottom is susceptible to dulling. Don’t lose that precious steelhead because your point wasn’t sticky sharp.

No matter what your preferred method is, begin by presenting your fly on a dead drift. Let the soft-hackles do their job, which is to move and flow and entice a steelhead. Once the dead-drift phase is complete, your presentation isn’t over. Let the fly continue downstream. Track the drift with your rod tip as the fly begins to swing upward. Although it doesn’t happen often, there are winter steelhead that will chase a fly down and hammer it. If you’re using an indicator, you won’t need it for visual reference—you’ll feel that strike all the way down to your icy fingertips.

The Woolly Worm first gained widespread popularity when Ray Bergman featured it in his landmark book Trout. He learned of the fly from Don Martinez, who tied a version “from a very old Missouri bass fly of somewhat similar design.” Turns out that what’s good for bucketmouths in the Show-Me State is even better for Great Lakes steelhead.

The original fly had a tag of red wool. I’ve tied one here with fluorescent fire orange Antron, and added a rib of holographic tinsel. You can and should play around with different-colored tags. Some of my favorites are blue, hot pink, chartreuse, and metallic copper. The steelhead will let you know if they have a preference. Bergman thought the Woolly Worm was a caterpillar pattern. I don’t know what steelhead think it is—maybe a hellgrammite or stonefly—but it certainly must look like something they’d want to eat before it gets away. In low, clear flows, I like this fly tied in a size 10. 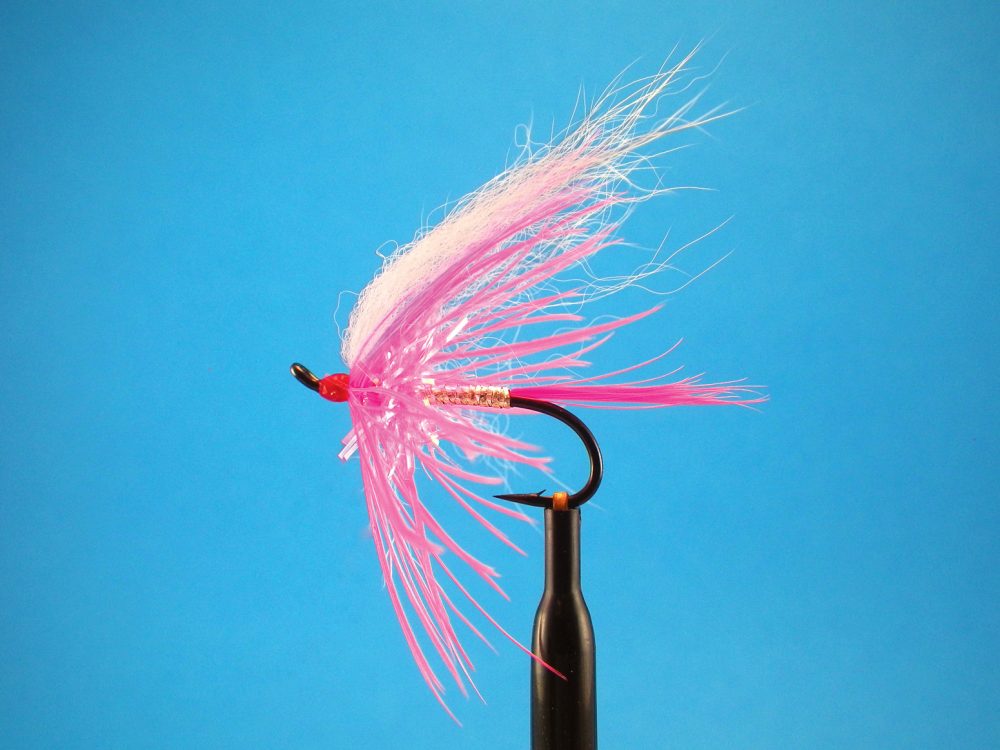 I first read about the Rajah in a slim volume titled Fly Patterns of Alaska. While I liked its look, I wasn’t thrilled about some of the materials. So I replaced the bucktail tail with soft hen hackle fibers and swapped the chenille, which I consider a lifeless material, for sparkly Estaz. Then I traded furs on the wing, substituting flowing artic fox for polar bear. Finally, I chose fancy holographic tinsel instead of flat silver.

The result is a soft-hackle that delivers a one-two punch of flash and motion. Does it work? The coldest day I ever went steelheading began with the mercury just a few degrees above zero. By midafternoon, the air temperature had barely made it into double digits. I was fishing a Salmon River Rajah under an indicator. As the fly completed its drift along the bottom, it began to swing up and downstream. I saw the wake before I ever felt the strike. It was a steelhead that had been in the river awhile, its chrome flanks long since transitioned to deep winter hues.

Any fly that can urge a dark horse to chase it down in 33-degree water on a day that would keep even skiers at home has a permanent spot in my steelhead box.