Short Day On The River 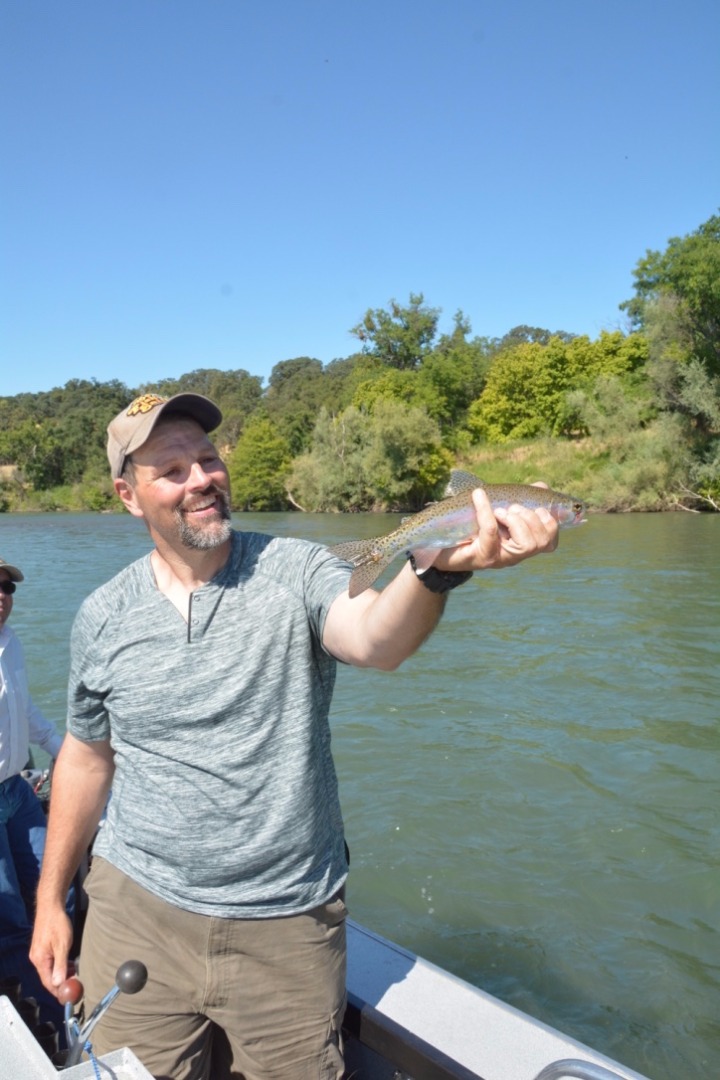 Fish Sniffer editor Cal Kellogg is all smiles while holding this trout up for the camera. There are much larger trout in the Sac but they weren’t biting on the day we were there. Gives us an excuse to go back soon.

It’s 7 o’clock on Monday morning.  The dirt boat ramp on the Sacramento River below the Jelly’s Ferry Bridge in Tehama County is bustling with activity.  Well, okay, there’s one roomy, jet-equipped Alumaweld boat there, and four passengers. They are fishing guide and boat owner Robert Weese, Cal Kellogg editor of the Fish Sniffer magazine, Bill Adelman a columnist for the Sniffer and me, a long-in-the-tooth freelance outdoor writer.  We are all hoping for a fun morning of camaraderie, fishing tales and action.  As luck would have it we settled for two of the three.

Some local anglers may not realize it, but when conditions are right the 37 mile stretch of the Sacramento River between Redding and Red Bluff produces some of the finest wild rainbow trout fishing in the West.  Heck, it is not unusual to hook and land colorful wild trout within the city limits of Redding. The question I always ask myself when I’m on the water is, why the heck don’t I do that more often?  Oh, I remind myself, I don’t own a boat, and bank fishing opportunities, while available, are limited.

I’ve always thought the best trout fishing is from Redding downstream to Anderson.  However, Weese explained that some of his favorite fishing water is farther downstream.  Since he’s been guiding there for decades, I’m not about to question his authority on the subject.

I would like to say that the fishing was as hot as the temperature, but that wasn’t the case.  Using crickets for bait, we caught and released a handful of colorful rainbows to 14 inches, but nothing spectacular and fewer than we expected. It was blazing hot by the time we got back to the ramp at noon, but even with the heat, and the lack of willing fish, I thought the trip was well worthwhile.  After all, we did catch a few trout, and we were on a pristine stretch of the river with plenty of wildlife to watch along the way including wild turkeys, ospreys, a bald eagle and several blacktail deer.

Weese assured us that he expected the fishing to be better than it was. We looked for reasons for the slow down and came up with a couple that made sense.  The full moon was one, and a sudden increase in the water flow was another.  Both items can temporarily affect the bite.

To get another briefing on the fishing so far this year I called Mike Bogue, another guide, for a second opinion.  He told me that the fishing on the Sacramento as recently as Friday, July 7, was quite good downstream from Redding.

“The best way to explain away the days when the bite isn’t red hot is to remember that wetting a line, quite often, is more about the fishing than the catching,” Bogue said.

To book a trip with guide Robert Weese for trout, salmon or steelhead call (530) 755-7196 or visit his web site at norcalsalmonguide.com.  I expect to get out on the river again in the very near future.  I know the first period of the annual salmon season is upon us (from the Red Bluff Diversion Dam downstream), and most anglers will be focused on them, but the trout are already here and so am I.