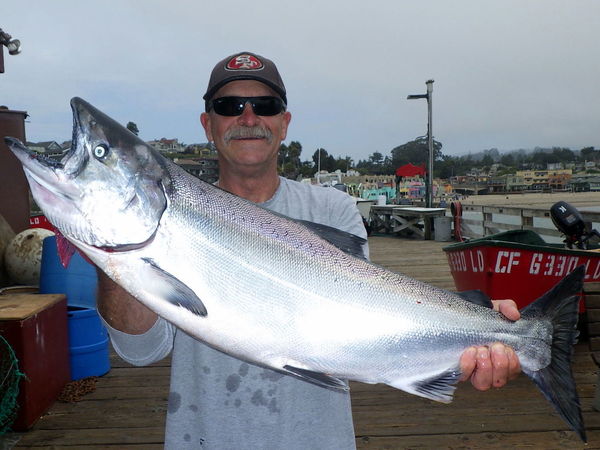 We would advise against kayak fishing near Lighthouse Point this weekend. A touring kayak was munched by a big adult Great White Shark on Tuesday. The paddler was ejected from his boat, but a nearby powerboat picked him from the water almost immediately. The harbor patrol was on scene within minutes. The power boaters were apparently asking the kayaker how fishing is at that location. His obvious answer could have been “There’s some big ones around here.” Kudos to Steve Lawson, a veteran sea-kayaker, for keeping his cool.

Ironically fishing in that location is very good right now. The reef in front of Steamer Lane is holding lots of rockfish with bigger lingcod lurking along the rocky bottom. Reefs all along West Cliff Drive especially towards Natural Bridges are producing well for rock cod anglers. Just east of Lighthouse point the halibut are moving to shallower water. A number of flatties in the 10 to 26-pound range were caught by anglers using bait or plastic swimbaits from Lighthouse Point down past the Mile Buoy.

Capitola has seen it’s share of flatties this week as well. Most success has come to those fishing live bait near the SC3 Buoy, off of Pleasure Point. Ed Burrell at Capitola Boat and Bait reports angler success catching blue lingcod from the Mile Reef using anchovies as bait, and halibut were caught in that same area using whole squid on the hook.

Monterey boats are still cashing in on lingcod from Point Pinos to Carmel Bay and even Big Sur when weather permits. Chris’ Fishing Trips counted full limits of rockfish Tuesday aboard the Check Mate, while Wednesday’s trip produced ¾ limits of rockfish and full limits (42) of lings for the boat. Halibut fishing is improving in Monterey along the long stretches of beach from Marina and Sand City down to Fisherman’s Wharf.

Salmon season is coming to a close in our area after this Saturday. The robust numbers of salmon this year caught Fish and Wildlife prognosticators by surprise. There have been more fish than they expected but the season officially closes below Pigeon Point after July 15.

In this last week, the salmon have been very cooperative, with many boats getting early limits from fairly shallow waters, close to the Santa Cruz harbor. On Wednesday, Todd Fraser at Bayside Marine reported, “The Salmon fishing was a little better today in front of the harbor in 100-160 feet of water. There were some limits caught by 10:00 for a few anglers who trolled Krippled Anchovies 80 feet down. The bite was slow in the morning but when the tide changed it picked up.”

Salmon season remains open above Pigeon Point. Skipper Tom Joseph with Fish On Sport fishing has been running charters from Princeton harbor and reports, “On Monday, we went looking and it paid off. Our party boated limits of salmon to 18 pounds, and released 4 shakers.”
http://www.norcalfishreports.com/fish_reports/67879603/sentinel/herald-fish-report.php
Share Share on Facebook Pin it Pin on Pinterest
Back to Fish Blog - Reports and Info