Time to troll the Rogue Bay 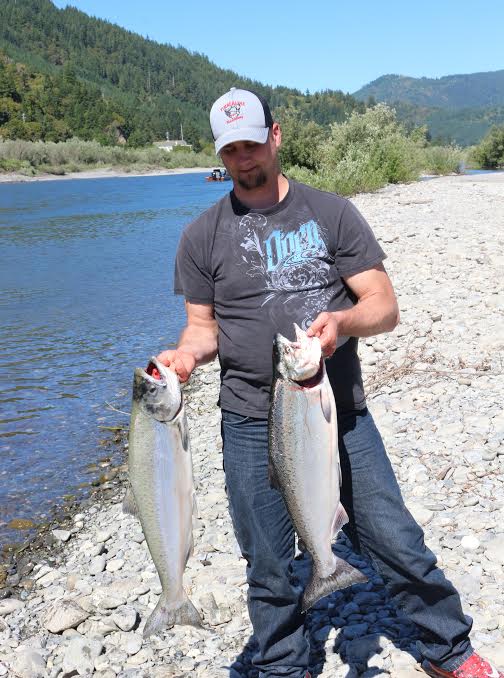 Steve Rayevich from Coquille, Oregon (shown) fished the lower Rogue with his friend Ronnie Davis and were well on the way to filling their limits of spring Chinook last week. Photos by Larry Ellis.

Sweltering hot inland temperatures are expected to raise the temperature of the lower Rogue River to 70-plus degrees.  On Thursday, the water temperature at Elephant Rock was already close to 70 degrees.

Salmon won't cross this wall of uncomfortably-warm water, which pushes them back downriver to the bay where the corpulent kings find their ideal comfort zone of 52 to 54 degrees.  This daily cycle allows the Chinook to increasingly stack up, creating the trolling fishery in which the Rogue Bay is so famous.

"The water temperature upriver (John's Hole area) right now is 69.8, and a guy down in the bay just took a beautiful picture of a fish that he caught down by the cat houses," said Jot's Resort owner and guide Sam Waller on Thursday. "So I'm afraid it's time to pull the top off the boat and start bay fishing because when that water temperature gets up toward 70 degrees, that's when they'll start holding up in the bay."

The rig du jour for trolling the Rogue Bay is the spinnerbait/anchovy rig. It would take three articles to precisely explain how to tie these puppies up, and most folks don't want to go through the hassle of learning the nuances of tying up this rig.

Luckily for a nominal fee, you can find hand-tied spinnerbait/anchovy rigs at Lex's Landing, the Rogue Outdoor Store and Jot's Resort, all in Gold Beach.

A spinnerbait/anchovy rig is basically a modified mooching rig.  It uses a very small, No. 2 sliding hook for the front hook, and the end of the rig has a loop which accepts a No. 2 treble hook for the back hook.

There is also a commercially-made spinnerbait rig called a Rogue Bait Rig, but in my opinion these contraptions use way too big of a front hook for my liking.

I like to buy the straight bait rigs that Larry Prestininzi from Lex's Landing ties up.  Several of these rigs come in one package for about $4.50.

Now if you want, you can add small beads and a quick-change clevis above the top hook on these straight bait rigs just in case you want to add a spinner blade, which all three aforementioned tackle stores sell as well.

To rig up a straight-bait anchovy, you will need to spread the loop and top hook so that they are about 7 inches apart.

The great thing about this rig is that the line coming from the top hook is unseen, literally buried inside the anchovy.

But first you will have to get the loop to go from the baitfish's mouth outside its anus.

For this purpose, I prefer using the Dee's Bait Threader.  It is a 12-inch thin rod with a point at one end and a small hook at the other.

Just run the pointed end from the mouth of the baitfish, through the middle of the bait and out the exit hole.  Grab the back loop of your leader in the hook end of the threader and simply pull the loop through the bait. No more searching for the baitfish's mouth.

"This is a one-shot deal," says Prestininzi.

Now insert the No. 2 front hook from the bottom of the anchovy's mouth so that the point comes out through the center of the scull, the hardest part of its head.

The top hook remains invisible and is only used to adjust the spin of the anchovy, which should be spinning tight like a drill bit.

Insert the No. 2 treble hook in the back loop and pull the line of the top hook so that the back hook shank goes through the fish's anus.  Feel for the anchovy's backbone with one the treble's points.  When you hit the backbone - stop!  Now adjust the baitfish so that it has a porpoise (top-to-bottom) appearance, never side-to-side.

You will also need a wire spreader which all the tackle stores carry.  Tie your mainline to one end, the leader to the other, and then tie a 20-inch piece of monofilament to the dropper end of the spreader.  Sinkers will range from 2 to 4 ounces.

The finer points of trolling this rig will be discussed in the next article.


Larry Ellis, author, writer, columnist and photographer has had a 50-year passion for fishing in California and Oregon's saltwater and freshwater venues. He is a well-known writer for Oregon, Washington and California Fishing and Hunting News, Northwest Sportsman, California Sportsman and Pacific Coast Sportfishing. He currently writes monthly for Salmon Trout Steelheader Magazine, and is the weekly fishing columnist for "On the Water" for the Curry Coastal Pilot Newspaper. He particularly loves living in his hometown of Brookings, Oregon - The heart of salmon country and gateway to fishing paradise. Posted with permission of the Curry Coastal Pilot of Brookings, Oregon.
http://www.oregonfishreports.com/fish_reports/67878793/time-to-troll-the-rogue-bay.php
Share Share on Facebook Pin it Pin on Pinterest
Back to Fish Blog - Reports and Info