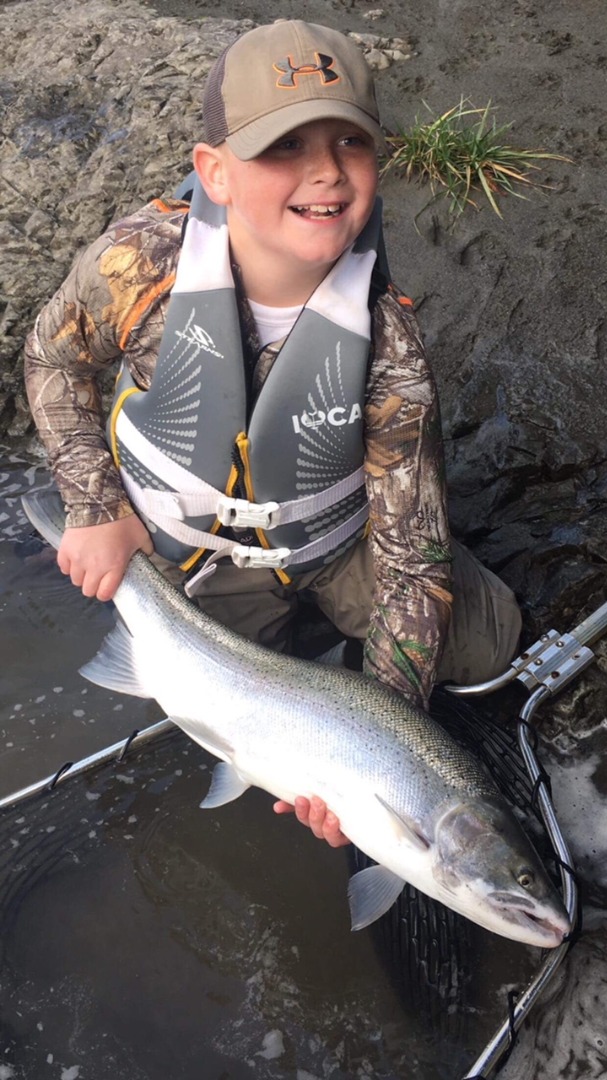 Nine-year old Sean Jones of Santa Rosa landed this nice steelhead all by himself on a recent trip to the Mad River with his father Troy. This weekend should be ideal for winter steelhead anglers as most of the coastal rivers will be fishable. Photo courtesy of Troy Jones.

It’s shaping up to be one heck of a weekend on the North Coast — expect the green water euphoria to be in full effect. All of the coastal rivers, except for possibly the main stem of the Eel, will be some shade of green. This only happens about once a season, and it typically follows an extended period of dry weather. The lack of rain is certainly not optimal, but the other side of the coin is almost every creek and river from the Chetco down to the South Fork of the Eel should be fishable — and likely full of steelhead as well. If you’re a winter steelhead fanatic, and I know most of you are, this is the weekend you’ve been waiting for.

Weekend Weather
We’re going to be dry for the next couple of weeks according to Ryan Aylward of Eureka’s National Weather Service. “The big ridge of high pressure is sitting off the coast, which will likely keep us dry for a while. We’re not seeing any rain through the 15th of the month, and after that, the models are showing less than normal precipitation.” Aylward said.

Salmon preseason process
The 2018 California ocean salmon sport and commercial fishing regulations have yet to be determined according to the CDFW website. Fishery regulations that take effect in April 2018 for the area south of Horse Mountain will be finalized at the Pacific Fishery Management Council (PFMC) meeting in March. Regulations in effect on or after May 1, 2018 will be adopted at the PFMC meeting in April. Beginning in 2018, recreational ocean salmon fishing regulations in state waters will no longer be adopted through the Fish and Game Commission (FGC) rulemaking process, but will now automatically conform to federal regulations in accordance with Section 1.95, Title 14, CCR. For more information on the ocean salmon, visit www.wildlife.ca.gov/fishing/ocean/regulations/salmon

Upcoming FGC meeting
California Fish and Game Commission meeting will be held Feb 7-8 at the Resources Building Auditorium, 1416 Ninth St., Sacramento at 10 a.m. To view the meeting agenda, visit https://nrm.dfg.ca.gov/FileHandler.ashx?DocumentID=153396&inline. The Commission will be briefed on the PFMC process for developing ocean salmon seasons and will receive an update on the automatic process to conform state recreational fishing regulations to federal regulations.

The Rivers:
Chetco/Elk/Sixes
The Chetco fished really well for the plunkers over the weekend. It was still high early in the week and slower than expected for the drift boats, but fish were spread throughout the river,” said Andy Martin of Wild Rivers Fishing. “It should be in prime shape all week. With a break in the rain, all the Southern Oregon rivers are now fishing. I had guides on the Elk and Sixes early in the week and they did well. I heard the best reports so far this season from the lower Rogue, with some guides getting six to eight fish a day sitting on anchor and running plugs.”

Smith River
The Smith is starting to clear, and the fishing has gotten a little tougher reports Mike Coopman. “The river was in great shape on Monday, it was on the drop and it fished really well. We hooked double-digits. But it’s gotten a little tougher each day. On Wednesday, I didn’t hear of many hooked, it was probably about a half a fish landed per boat. The river is still in good shape height-wise, the rain we had on Monday night helped out. There’s lots of seals around, but the boat pressure hasn’t been too bad,” Coopman added.

Eel River (main stem)
The Eel still has a lot of water, but the edges are starting to turn green according to Paul Grundman of Rio Dell’s Grundmans Sporting Goods. “The river should be in really good shape by mid next week, if not before, as flows continue to drop,” said Grundman.

Eel River (South Fork)
According to Darren Brown of Brown’s Sporting Goods in Garberville, the river in the Sylvandale area dropped about a foot and a half overnight on Tuesday. “We’ve got about a foot of visibility on Wednesday, and the water is turning nice and green. Should be in great shape by the weekend,” Brown added.

Van Duzen
According to Grundman, the Van Duzen should fish above Yager Creek by the weekend and should be fishable down to its mouth by early next week.

Mad River
Fishing on the Mad isn’t red-hot, but it has improved, reports Justin Kelly of RMI Outdoors. “The river is just starting to turn green, and should be bait-fishable by the weekend. There’s fish spread throughout the river, but the biggest concentration is directly below the hatchery, which is where most of the anglers are as well. There’s a lot more hatchery fish around now too.” Kelly added. “The river was holding at 9 feet on Wednesday, but is predicted to drop down to 8.5 feet by Saturday.”