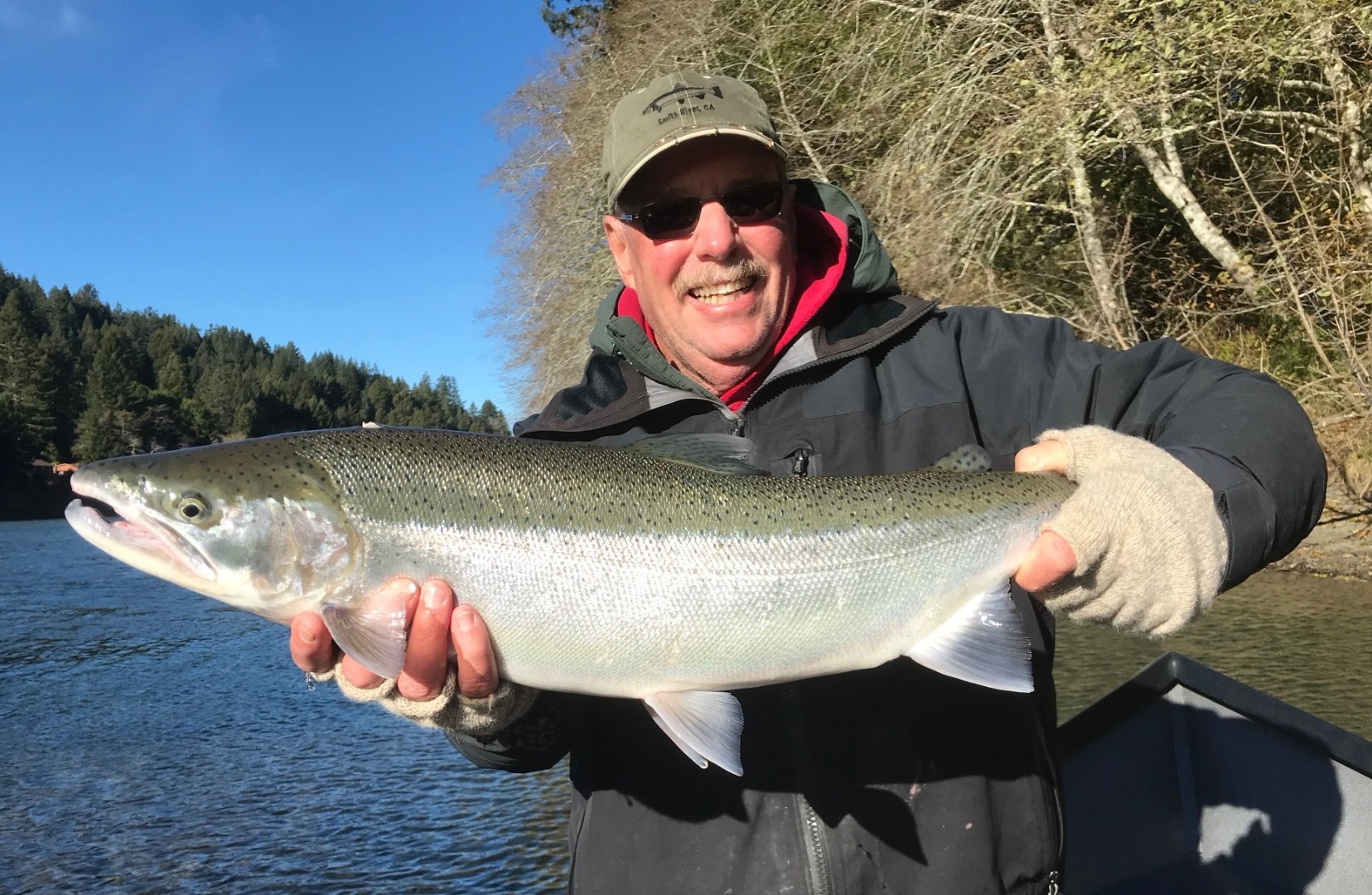 Skip Congdon of Crescent City landed this bright winter steelhead last weekend while fishing the Smith River. The increase in flows spurned by Tuesday’s rain should make it a good weekend for steelhead fishing on most of the North Coast rivers. Photo courtesy of Mike Coopman’s Guide Service

It wasn’t much, but it was a start. Tuesday’s storms brought just enough rain to bump up the river flows, and hopefully light a fire under the winter steelhead. Most of the rain fell from Eureka north, with the Smith and Chetco each jumping a couple feet. The Smith was dropping quickly and will likely be clear by Saturday, but the Chetco should be in great shape and fish through the weekend. Locally, the Mad River saw increase of roughly 300 cfs, which is plenty to pull some fresh steelhead from the salt. It should have plenty of color through the weekend, and could be your best bet. The Eel didn’t see much in the way of precipitation, but plenty of snow fell in the hills. The South Fork remains closed, and the main stem is running low and clear, but open. The next chance of substantial rain will likely be in 2018, so if you’re looking for some early-season steelhead action, this would be the weekend.

The weather ahead
According to Ryan Aylward of Eureka’s National Weather Service., the next chance of rain will be late Sunday and into Monday. “Right now, this is looking like a pretty weak system and we’re not very confident it will hit the coast. There’s about a 40 percent chance we’ll see some rain out of this storm. The rest of the week looks mostly dry, with the chance of some showers, but not enough to raise any of the river levels. The good news is the long-term outlook, including January, is trending towards above normal precipitation,” Aylward added.

If crab gear is located in a navigable channel, it’s moved out of the channel and a pink card is placed on the gear as a warning. If the same crab gear is found back in the channel after a warning card is issued, the gear is removed and taken to the Fish and Wildlife Office located at 619 Second Street, Eureka.

The Marine Unit would also like to remind recreational crabbers that each buoy must be legibly marked to identify the operator’s GO ID number as stated on their fishing license. The Marine Unit also suggests placing a current telephone number on each buoy so that owners can be notified of its change of location if found in the navigable channel.

Recreational crabbers who have lost crab gear this season should contact the Eureka Fish and Game Office to inquire if their gear has been placed at the office. For information regarding navigable channels of Humboldt Bay, contact the Humboldt County Sheriff’s Office Marine Unit at 707-268-2537.

2018 Fishing license
A reminder that it’s the time of the year to purchase your 2018 license, which is required for residents 16 years of age or older to take fish, mollusks, crustaceans, invertebrates, amphibians or reptile in inland or ocean waters. The cost of a new resident sport fishing license is $48.34. A North Coast salmon report card, which will run you $6.48, is required for all anglers taking salmon in the Smith River System or Klamath-Trinity River System. If you plan to fish for steelhead, you’ll need to purchase a steelhead report card, which will cost $7.30 this year. The Dept. of Fish and Wildlife does not accept cash for fishing licenses. For more info, visit wildlife.ca.gov/licensing/fishing

Reduced-Fee sport fishing licenses now available
Reduced-cost fishing licenses are available in 2018 for $7.56 (instead of $48.34) for those 65 or older on reduced income or disabled military veterans. For more information on all CA fishing licenses, visit wildlife.ca.gov/licensing/fishing#44521417-free--reduced-fee

Mattole River opens to fishing Jan. 1
The Mattole River will open to fishing on Monday, January 1 from 200 yards upstream of its mouth to the confluence with Stansberry Creek. Only artificial lures may be used and barbless hooks are required. The Mattole is also regulated by low flow closures, with a minimum flow of 320 cfs at the Petrolia gauging station.

The Rivers:
Chetco/Elk/Sixes
Heavy rain on Tuesday finally has the Chetco approaching normal winter levels reports Andy Martin of Wild Rivers Fishing. “The river should be in good condition this weekend. Just before the rain, a few steelhead a day were being caught on the lower end, along with some dark salmon. There are still a lot of salmon spawning. Another storm is expected just after Christmas. The Elk and Sixes were too low to drift early this week but should be in good shape for the weekend. There should be a few bright kings, and maybe some early steelhead in both rivers.”

Smith River
The rain that fell on Tuesday should kick-start the steelhead season reports Mike Coopman of Mike Coopman’s Guide Service. He said, “Quite a bit of snow fell in the hills, so the river only came up a couple feet. This river should be driftable, and have some color for the next day or so, but you’ll want to be here today. It’s going to be a pretty short window. I fished last weekend under low and clear conditions, and there are some nice fish in the river. We really need some sustained weather to keep the flows going, and it looks like that may happen mid next week.”

Main stem Eel
“We didn’t get much rain upriver, so the increase in flows were pretty minimal,” said Paul Grundmans of Grundmans Sporting Goods in Rio Dell. “The river is low and clear, but we did have a pretty good run of adult steelhead that pushed through last week. I’m also hearing the river is full of half-pounders. The adults have likely moved upriver, be we should see more fish push in when the rains return.”

South Fork Eel and Van Duzen
As of Wednesday, both rivers remained closed due to low flows.

Mad
Following Tuesday’s storm, the river came up about a foot on Wednesday according to Justin Kelly of Eureka’s RMI Outdoors. He said, “The water color was a little off on Wednesday, but should be decent on Thursday. Friday through the weekend should be just about perfect, conditions-wise. There’s been some fish around, with most coming on soft beads or yarn. The water running down the ladder to the river was turned on Monday, so that should definitely bring in some fish. It should be a good weekend.”