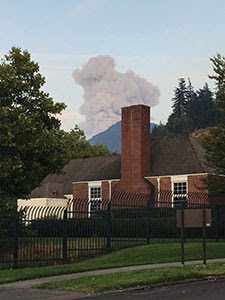 The Bonneville Auditorium chimney with smoke from the Eagle Creek Fire visible in the background on Wednesday, Sept. 13.
Photo Credit: Greg Davis, ODFW
by ODFW
9-16-2017
Website
ODFW staff are evacuating about 1.65 million coho salmon and 132,000 spring Chinook salmon from Cascade Hatchery today and tomorrow due to the threat of debris flow in areas burned by the Eagle Creek Fire.

“Rain is forecast next week in areas scorched by the Eagle Creek Fire, and we expect to see mudslides and debris flow,” said Brett Requa, ODFW east region hatchery coordinator. “This could overwhelm the screens on our water intake, reducing or completely shutting off the flow of water that sustain these fish, so we want to get them moved now.” 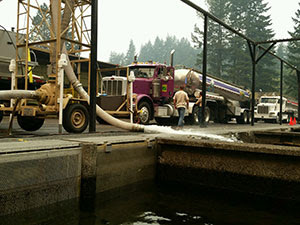 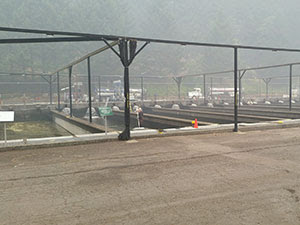 Photo Credit: Matt Groza, ODFW
These juvenile fish (< 1 year old) are being transported beginning this morning in fish transport trucks which have oxygen supplies to help lower stress in the fish and keep them healthy.

Bonneville Hatchery has well water available and is not expected to be hit as hard by the debris flow so their 2.4 million fish will remain on site. Staff are also weighing options to move Oxbow Hatchery and Herman Creek coho to another hatchery in the state but fire experts feel the Herman Creek drainage is in much better shape than the Eagle Creek drainage.

Photo Credit: Matt Groza, ODFW
“We thank Eagle Creek firefighters for saving all the structures at our three Cascade Locks fish hatcheries,” said Requa. “ODFW will be working to limit any harmful impacts to fish due to the Eagle Creek Fire over the next few months and years.”

ODFW also thanks ODOT for delivering diesel fuel to power Cascade Hatchery’s generator over the past 10 days. The hatchery has been without power since Sept. 5.