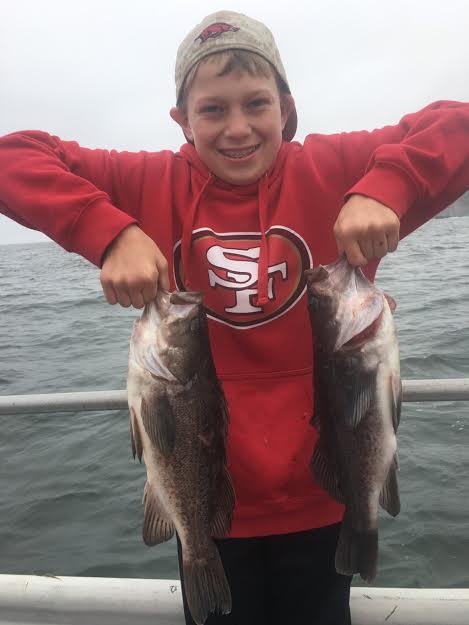 Springdale, Arkansas resident Preston Stevens was all smiles after landing a pair of black rockfish while fishing out of Trinidad on Tuesday.
Photo Credit: Curt Wilson /Wind Rose Charters

This weekend’s minus tides could be problematic for ocean anglers launching at Eureka’s two public boat ramps. As most boaters are aware, the Eureka public boat ramp off of Waterfront is a muddy mess at low tide. And this weekend’s minus tides fall smack dab in the middle of when the boat launching traffic is typically the heaviest. Saturday’s low of -0.8 falls at prime launching time, right around 7:15 a.m. Sunday isn’t much better, with a -0.8 right around 8 a.m. Reportedly, it will take at least a couple feet of water to get across the mud flats. Your best bet is to launch as early as possible and wait for first light, or launch later in the morning. Keep in mind the afternoon lows return around 2 p.m., but they aren’t minus tides. The mud situation at the Samoa Bride boat ramp is similar to Eureka’s public ramp, so that’s not necessarily a good alternative. The ramp at Fields Landing is your best bet, with no mud all the way to the end of the docks. The tradeoff is the ramp isn’t as steep and you may have to get your truck in the water, depending on the length of your boat.

The minus tides could also create early morning hazardous bar conditions this weekend due to the combination of tides and swells converging at the time when most boats could be headed out the mouth of the harbor. Hard charging water flowing out of the bay and running straight into large swells can be extremely dangerous and you should always error on the side of caution — even if it means waiting until the out-flowing water from the bay has slowed, which usually occurs within 30 to 45 minutes prior to the tide bottoming out. If you’re planning on hitting the bar at daylight, check the conditions first. To monitor the latest Humboldt bar conditions, visit wrh.noaa.gov/eka/swan or you can also verify the conditions as reported by looking at the bar cam.

Marine Forecast
After the front blows through on Thursday, the ocean looks like it will be fishable at least through Saturday. Friday’s forecast is calling for S winds 5 to 10 knots and S waves 2 feet at 4 seconds and W 5 feet at 9 seconds. Saturday is calling for SW winds 5 to 10 knots with SW waves 3 feet at 5 seconds and W 5 feet at 10 seconds. Sunday’s forecast is calling for NW winds 5 to 15 knots with W waves 7 feet at 8 seconds. These conditions can and will change by the weekend. For up-to-date weather forecast, visit weather.gov/eureka/. You can also call the National Weather Service at (707) 443-7062 or the office on Woodley Island at (707) 443-6484.

Youth fishing derby this Saturday
The 10th annual SkyCrest Lake Youth Fish Derby & Firewise Day will be held Saturday, June 10. The free event for youths 3 to 15 years old will be held at SkyCrest Lake, Burnt Ranch-Underwood Mountain Road and is hosted by the Willow Creek Fire Safe Council. Registration begins at 8 a.m. and fishing will be from 9 a.m. to noon. There is a free hot lunch for all from 10 a.m. to 12:30 p.m. Shore fishing only and no pets or alcohol. For more information, call 707-499- 0767 or 530-629-2770, or email barbaradarst@yahoo.com

The Oceans:
Eureka
“After being tied up at the dock for a few days, we finally got back on the water Tuesday,” said Skipper Tim Klassen of Reel Steel Sport Fishing. “The halibut are still biting; we hooked four and landed three, so the fishing is still pretty good. There’s also lots of petrale and sand dabs around as well. Inside Humboldt Bay, a lot more bait has started to show up and the California halibut action is starting to improve. It looks like we may have some decent weather ahead. Other than Thursday, the ocean looks to be fishable through at least Saturday.”

Trinidad
From Trinidad Head to Patrick’s Point is loaded with black rockfish reports Curt Wilson of Wind Rose Charters out of Trinidad. He said, “I’ve only been out a few days as we’re just getting our season started. There doesn’t seem to be a lack of fish, but it’s a little tougher when you can only keep three blacks. I heard quite a few halibut were caught last week, but it’s been quiet this week, likely due to the rough ocean outside. The crabbing remains really good, we’re getting lots of keepers in 100 feet of water.”

Shelter Cove
We finished up the first salmon season last Tuesday and Wednesday with limits both days,” said Captain Jake Mitchell of Sea Hawk Sport Fishing. “On Thursday we went down to the Ranch House and had limits of rockfish and lings by 11:00. We were off the water until Tuesday due to the conditions, but we picked up where we left off with early limits of both rockfish and lings near Bear Harbor. We’ve also been pulling crab pots, but it’s been slow. We’re only averaging about four keepers per pot. No halibut have been caught this week and very few so far down here this year. It's been pretty rough, so there really hasn't been much effort.’

Crescent City
The rockfish are biting pretty good reports Chris Hegnes of Crescent City’s Englund Marine. “The hot spot this week has been the Big Reef. The fishing has been really good, and quite a few big lings are being caught as well. The halibut bit pretty well last week, though I haven’t heard of any being caught this week. The perch fishing remains red hot at South Beach,” Hegnes said.

The Rivers:
Lower Klamath
Springer fishing on the Lower Klamath picked up a slightly this week, with a handful of salmon reportedly caught by boats anchored on the lower river. As of Wednesday, flows were down to 17,000 cfs, but will jump back up to 21,000 by Friday afternoon due to the rain. Hopefully this bump in flows will kick-start the run and not blow out the river.


Find "Fishing the North Coast" on Facebook and fishingthenorthcoast.com for up-to-date fishing reports and North Coast river information. Questions, comments and photos can be emailed to kenny@fishingthenorthcoast.com.
http://www.norcalfishreports.com/fish_reports/67878122/low-tides-troublesome-for-eureka-boat-ramps.php
Share Share on Facebook Pin it Pin on Pinterest
Back to Fish Blog - Reports and Info