Longerleader Fishing Will Save the Oregon Rockfish Fishery 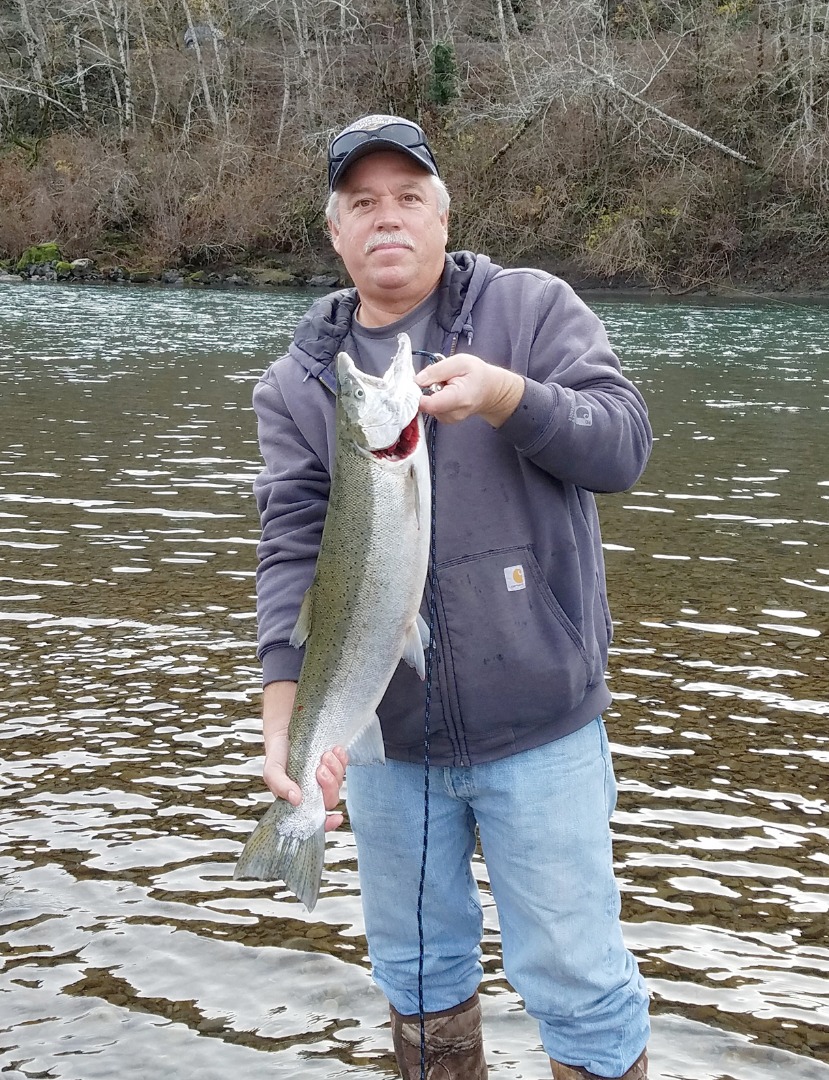 Scott Jones of Brookings was on fire on the Chetco River last Thursday when he nailed this beautiful hatchery metalhead while plunking a No. 4 Spin-N-Glo from the bank. He also donated a wild steelie to the Chetco Broodstock Program, photo by Larry Ellis

It's been an excruciating 105 days since Oregon bottom fishermen have been prohibited to fish for rockfish, cabezon and lingcod since the fishery was completely shut down on September 18.

But it is now January of 2018 and the rockfish situation is starting to look very hopeful.  Anglers can now keep 5 rockfish of their choice a day plus an additional 2 lingcod (minimum length of 22 inches) a day.

That's rockfish fishery number 1, the nearshore fishery that basically gives anglers carte blanch to target all Sebastes varieties (except for yelloweye rockfish, which are always prohibited to be kept).

You see, what many people don't remember was that fishing for rockfish, cabezon, greenling and lingcod was also completely shut down back in 2004. Here's a quote from an ODFW 2004 news release:

"The sport fishery for major groundfish species will close in all saltwater areas (including fishing from shore, in estuaries and the ocean) starting Friday, September 3, 2004, much earlier than originally expected.  This closure includes all rockfish, lingcod and greenling.  Retention of these species is prohibited by all methods of take."

The cause of the 2004 shutdown (as well as in 2017) in a nutshell, was that the sport fisherman's harvest cap for black rockfish was exceeded before the end of the year.  And since black rockfish are practically ubiquitous, and other fish species like blue rockfish and lingcod are caught in the same vicinity by using similar fishing methods, the entire fishery was then shut down.  It was the first year in the history of Oregon that the rockfish fishery would not be open for the entire year.

Oh how soon do we forget - or perhaps it's just a day we selectively choose not to remember.

But Wayne Butler of prowlercharters.com in Bandon and sport fishing extraordinaire John Holloway chose to remember that day, and back in 2008, the two decided that the rockfish fishery should never close like that again.

That's when door number 2 opened, and the two started the long, arduous process of deciding how to target suspended rockfish such as yellowtail rockfish, widow rockfish and canary rockfish.  Targeting suspended rockfish outside the 40-fathom curve would also take the pressure off nearshore rockfish such as black rockfish.  Less pressure off black rockfish means theoretically that the harvest cap shouldn't be exceeded as well. Since these suspended fish were hefty and plentiful, it would also allow for an increased limit to boot.  And speaking particularly of yellowtail rockfish:

"There's LOTS of them!" exclaimed Butler. "I thought that if we could come up with a way to target those without catching yelloweyes and canaries, we could have a wide-open fishery."

Back in 2009, canary rockfish were also prohibited to be caught and kept. But now that the canary stocks have been rebuilt, they are now fair game using the longleader fishery.  And boy are they plentiful and large.

Butler gives Holloway all the credit.

"John did all the leg-work and did a fantastic job of putting this together," added Butler.

That's when Holloway found out that most rockfish battles are not won in the depths of Davey Jones's Locker - they are conquered in the rings of Pacific Fisheries Management Council meetings.

So John laced up his gloves and gave it all he had.  He fought back and forth through a year of objections from council members and did some pretty fancy legwork of his own running back and forth from enforcement officials, to scientists on the Scientific and Statistical Committee (SSC).

So in 2009, John finally got Exempted Fishing Permits to fish for yellowtail rockfish outside the 40-fathom curve using 30-foot drop sinkers. It was the bare beginning of the longleader fishery.

The purpose of using the long droppers was twofold: to keep the lures off the bottom, where most yelloweye rockfish are believed to hang out; and to target the other yellow meat - yellowtail rockfish, a suspended rockfish not commonly caught by recreational anglers.

Holloway admits that the first experimental trip did make him a little nervous.

"On that first trip, if everybody had brought up a bunch of yelloweye, that would have been the end of the experiment," noted Holloway.

Now that John's stage fright jitters are over, he entered the ring on the first round of the finals on the day of the 2009 summer solstice.  It was the longest day of the year, and perhaps, his life.

So Captain Mick Buell from garibaldicharters.com loaded up the Norwester with 10 passengers and took them out past the 40-fathom curve, where they proceeded to spank the living daylight out of the yellowtails.

Holloway was on board; and so was Sheila Johanns from the Pacific States Marine Fisheries Commission. On every day of those first experimental trips back in '09, an observer from the PSMFC was required to be present, who recorded the species and the amount of every fish that was caught.

"Where we were fishing, it was only about 400-feet deep, and the top of the school was only 200 feet deep, so you didn't have to be right on the bottom," commented Buell.

After the 8-hour trip, the final score was: 144 yellowtail rockfish averaging 6-pounds each, with a by-catch of only 5 canary rockfish (which you can now retain).

As for the opposing side: Yelloweye - none.  Zip, zilch, nada!

Ding ding - round 1 was a knockout!

It may have only taken 10 years for ODFW to implement Holloway's passion into actual law, but longleader gear is now allowed past the 40-fathom curve during certain months.

At the present time, longleader gear can only be deployed during the months of January through March, and October through December.

From April through September, anglers cannot deploy this fishing method past the 40-fathom curve.

However! Since fishing for bottomfish past the 40-fathom curve is regulated by the Federal Government, ODFW proposed a rule that would authorize the use of midwater longleader gear for recreational fishing in waters seaward of the 40-fathom curve.

Through blood, sweat and a few tears, ODFW's request was finally published as a proposed rule in the Federal Register on December 19, 2017.

So Larry the Geek is now giving 99:1 odds that the proposed rule will be made official shortly after the terminating date of January 18.  This rule would enable recreational fishermen to use longleader gear past the 40-fathom curve year-round.

"What happened on December 19 was the proposed rule," said Lynn Mattes, groundfish project leader for ODFW. "It's open 30 days for public comment, closing January 18.  Then the National Marine Fisheries Service (NMFS) will address any public comment and will then publish the Federal Rule shortly after that.  This is a huge step; one we've been trying to get for quite a while, so we're pretty excited about it."

So What Exactly is Longleader Gear?

Longleader gear uses a minimum of 30 feet of line between the terminal weight and the lowest hook.  It also uses a non-compressible float above the top hook.  This allows a fisherman to fish for suspended rockfish and not catch any by-catch of yelloweye rockfish because you are not fishing directly on the bottom.

The limit is 10 rockfish per day.  You are not allowed to fish the longleader fishery and fish inshore for rockfish in the same day.

Lingcod are also not permitted to be kept on the day of a longleader fishery trip.

Retention of black rockfish, blue rockfish and other nearshore rockfishes are not permitted as well.

To keep apprised of further developments on the longleader fishery, visit ODFW at dfw.state.or.us/MRP.  Clicking on "Sport Groundfish" will take you to a list of longleader options.

How Successful is the Longleader Fishery?

When I was a boy, I remember stacks of colorful fish piled head high on ice at Bodega Bay and other ports.  When I see the amounts of vibrant canary rockfish that are being displayed at the Charleston fillet tables, it brings me back to those days of yore.

So the answer is that the longleader fishery has been very successful.

"We've had nothing but positive experiences with the longleader fishery," says John (Sharky) Blanchard, of Sharky's Charters in Charleston.  "I will offer it all year round."

Sharky can also be picky as far as which fish he decides to target.

"I get mostly yellowtails but canaries are what people really like to see come up on their line. But I think that the yellowtail rockfish are a far superior fish as far as (meat) recovery goes. And they're the best eating. That's the fish that I would want to take home.  So I ask my clients what they want to catch.  I'll ask them, 'Do you want to catch these yellowtails or do you have your eyes set on a bunch of orange fish.'"

And Wayne Butler, the co-inventor of the longleader fishery has also done extremely well out of the Port of Bandon.

"After they did the closure on us, I did run longleader trips toward the end of the season and we did fantastic," noted Butler. "It's a little bit of an inconvenience do deal with that 30-foot drop sinker. But when you get by that, the fishing is great and the catching is great!  The way I'm looking at this is that I'll have two trips to sell now.  I'll sell either a nearshore 5 fish and 2 lingcod trip, or I will sell a little more expensive 8-hour offshore 10-fish longleader trip."

The Chetco River once again ran her true colors on Thursday when the river was spilling at a very low 900 cfs.  Even with low flows, plunkers still picked up about 4 fish when I was there for a short period of time.

The trick was to make long casts to get to the colored water, which had a slight yellowish tinge, a color that I believe was a result of the ash caused by the Chetco Bar Fire.

There were also boaters side-drifting the tail-outs and current seams, using Puff Balls and a very small cluster of roe about the size of your pinky fingernail.

Anglers drift-fishing their favorite setups were also hooking up above Loeb State Park.

Two of the fish I saw were wild and were donated to ODFW for the Chetco River Broodstock Program.  The other two fish were beautiful specimens of hatchery steel, as bright as a freshly-minted quarter.

The National Weather Service is predicting that the Chetco will be on-the-rise this weekend, possibly shooting upward toward 2,000 cfs.  The river should fish well on-the-drop come Sunday and Monday.

Which reminds me, do not forget to buy your 2018 license and tag if you intend on fishing on Monday.

By the way fish have been caught on low flows, I am predicting an excellent January for winter steelhead.