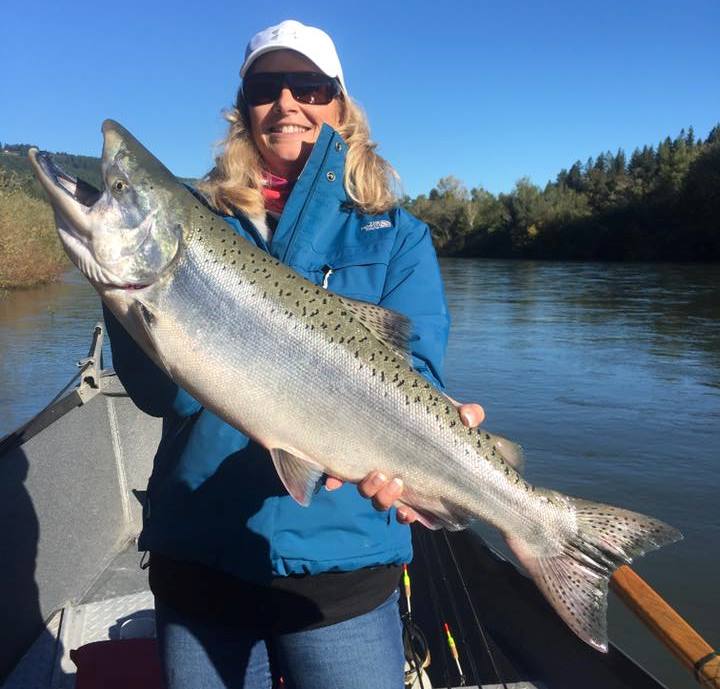 Last weekend’s rain provided a glimpse into what could be one heck of a late-fall coastal salmon season on the Smith and Chetco rivers. Following last Thursday’s rain, the Smith opened to fishing above Rowdy Creek for the first time this fall. And per usual, that first big rise brought in plenty of big, chrome-bright kings. Sunday was the day to be there, with just about all of the boats landing fish. Monday was the day to be on the Chetco as the river dropped to 3,000 cfs in the morning and brought in a bunch of new kings. Fish were spread throughout the river, and everyone was catching. If these first few days are any indication, we could be in for a fantastic season. All we need is more rain.

Weekend Weather
Enjoy the sunshine while you can as we could see a pattern change late next week. “The next chance for rain is late next week, with a chance of some light showers on Thursday and Friday,” said Ryan Aylward of Eureka’s National Weather Service. “The models are showing a potentially bigger storm next Saturday. We’ll have to see if that materializes, but we should start to see a shift into a wetter pattern,” Aylward added.

Recreational abalone season set to close
Recreational Red Abalone season will come to a close on Nov. 1. CDFW reminds abalone anglers that the law requires them to return their abalone cards to CDFW or report their harvest data online by Jan. 31, 2018 even if they did not try to take abalone. Data may also be submitted online from Nov. 1 until Jan. 31, 2018 at wildlife.ca.gov/licensing/lishing#758846-harvest-reporting.

Crab harvesting closure extended on Oregon coast
In a press release issued on Monday, the Oregon Department of Agriculture and the Oregon Department of Fish and Wildlife announced the immediate closure of recreational and commercial crabbing from the north jetty of the Coquille River, which includes the bay in Bandon, to the California border due to elevated levels of domoic acid.

This includes crab harvested in bays and estuaries, and on beaches, docks, piers, and jetties. The recreational crabbing season in the ocean closed coast-wide on Oct.15

The announcement extends last week’s recreational closure. Crab harvesting from the north jetty of the Coquille River to the Columbia River remains open in bays and estuaries, and on beaches, docks, piers, and jetties.

Dungeness crab testing
According to Christy Juhasz, an Environmental Scientist with CDFW, the next round of testing for Crescent City and Eureka were sent to California Dept. of Public Health (CDPH) on Friday, Oct. 20. “A fisherman went out today to collect another round of Dungeness crab samples at Crescent City to be shipped this week as well. We are tentatively scheduling preseason quality testing in the next week,” Juhasz added. . For more information regarding recreational Dungeness crab fishing regulations and other crab species, please visit the DFG Marine Region website.

Dungeness crab sport fishery to open statewide
The popular Dungeness crab sport fishery will open statewide on Saturday, Nov. 4, barring any delays. The daily bag limit is 10 Dungeness crabs per person, except when fishing from a commercial passenger fishing vessel (or party boat) south of Mendocino County, in which case the limit is six. A legal-sized crab must be five and three-quarter inches measured by the shortest distance through the body from edge of shell to edge of shell directly in front of and excluding the points (lateral spines). Crabs taken from party boats must measure six inches minimum distance.

Willow Creek weir trappings
“The rain brought us quite a flush of fish last Friday. It was good to see them after some fairly slow days the rest of the week,” said Mary Claire Kier, an Environmental Scientist on the Trinity For the trapping week of Oct 15 through Oct. 21, 22 Chinook jacks were trapped at the weir. To date, 856 jacks have been trapped compared to 69 for the entire 2016 trapping season. This past week, 114 adult Chinook were trapped, bringing the season total to 990. In 2016, only 459 total Chinook were trapped.

River Closures
As of Thursday morning, all the North Coast rivers subjected to low flow fishing closures, including the Eel, Mad, Redwood Creek, Smith and Van Duzen are closed. Sections of rivers that are open include the main stem Eel River from the paved junction of Fulmor Road to its mouth, the main stem Mad River from the Hammond Trail Railroad Trestle to its mouth and the main stem Smith River from the mouth of Rowdy Creek to its mouth. The Department of Fish and Game will make the information available to the public no later than 1 p.m. each Monday, Wednesday and Friday as to whether any river will be closed to fishing. The rivers can be opened up at any time. The low flow closure hotline for North Coast rivers is 707-822-3164.

The Rivers:
Smith River
The river opened to fishing on Friday, but Sunday was the day. After peaking at 4,200 cfs early Sunday morning, the Smith was full of bright kings, along with some darker fish that have been holding in the lower river for a while. The increase in flows brought in a bunch of new fish, and the boats working the forks all the way down to the Outfitters all landed fish. The bite got a little tougher on Monday as the river was on a pretty steep drop. With no rain since Sunday, the river has dropped out and is closed as of Thursday morning to fishing above the mouth of Rowdy Creek. It looks like it will be closed for a while, with the next rain forecasted to hit the area late next week or weekend. The daily bag and possession limit is one (1) Chinook salmon and no more than five (5) wild Chinook salmon over 22 inches per year.

Chetco/Elk/Sixes
“The Chetco fished well last Friday and again Saturday morning before blowing out Saturday afternoon through Sunday,” said Andy Martin of Wild Rivers Fishing. “On Monday, as the river dropped from 4,000 cfs to 3,000 cfs overnight, fishing was really good. There were fish spread throughout the river and everyone on the water was catching fish. Really good plug bite. On Tuesday, once flows got down to around 1,000 cfs, fishing was tougher, although all the guides still got a couple of fish. The river will be low and clear over the weekend.”

According to Martin, the Elk fished okay on Monday, while the Sixes was decent on Tuesday. “The Elk went from 4.2 feet on Sunday to 3 feet on Monday. Both rivers will be too low to drift by the end of the week,” added Martin

Trinity
Upper
Fishing from Douglas City to Del Loma, Steve Huber of Steve Huber’s Guide Service reports it was nice to see rain last week. “We did get some color to the river on Sunday from the fire in Junction City. They released the smolts from the hatchery, so it’s nearly impossible to fish bait. We switched over to plugs, making it a little bit easier to get down to the steelhead. Most the steelhead we are seeing are in the four to six-pound range. There are still a few salmon around and up on their beds. Fly guys are finding success with stones and egg imitations and some of the bank anglers  are out there with nightcrawlers and roe. Most of the fishermen are concentrated in the Junction City to Del Loma stretch.” Huber added.