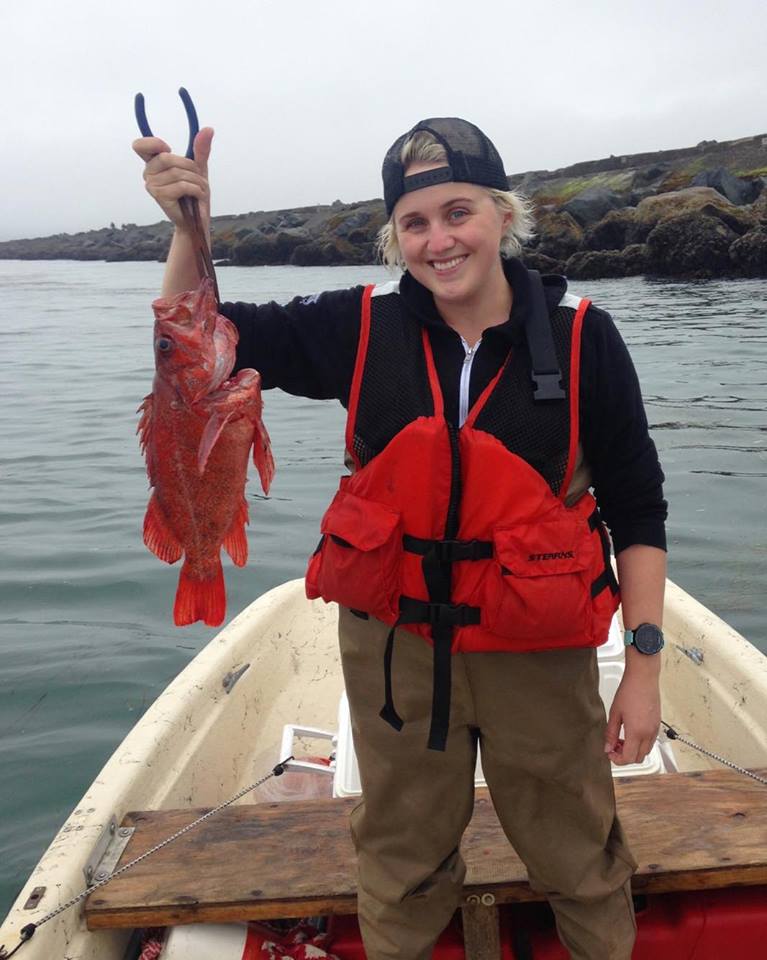 Becka Pearcy of Arcata landed a nice Vermilion rockfish on Saturday while fishing with her dad Bill. The father and daughter duo were fishing along the south jetty. The tasty rockfish weighed in at just over 4-pounds.
Photo Credit: Bill Pearcy

Let’s get the bad news out of the way first. The Klamath River, for the first time that anyone can remember, is completely closed to salmon fishing as of Tuesday, Aug. 15. With only 12,000 adult fall-run Chinook expected to return, an all-time low, the closure was needed to help protect the stocks. The Klamath fall-run Chinook are currently classified under the federal plan as “approaching an overfished condition.” With poor returns of adults the past two years, coupled with returns this fall that are expected to be just as bad or even worse, the stock is expected to be classified as “overfished” in 2018. Saying that every fish counts, especially returning spawners, would be a huge understatement. The Trinity still has a couple weeks left prior to its closing. It will remain open to salmon fishing through Aug. 31 downstream of the Old Lewiston Bridge to the confluence of the South Fork Trinity River. The limit is two kings of any size.

Now the good news. Both rivers will remain open to steelhead angling through the salmon closure. On the Klamath, fishing is allowed from 3,500 feet downstream of the Iron Gate Dam to the estuary. The daily bag limit is 2 hatchery steelhead. The Spit Area (within 100 yards of the channel through the sand spit formed at the Klamath River mouth) closed to all fishing on August 15 and will remain closed through Dec. 31.

The Trinity is open to steelhead angling from downstream of the Old Lewiston Bridge to the confluence of the Klamath River through Dec. 31. The one exception is the area downstream of the Highway 299 West bridge at Cedar Flat to the Denny Road bridge at Hawkins Bar. This area is closed to all fishing from Sept. 1 through Dec. 31. The daily bag limit is 2 hatchery steelhead.

Trinity River releases scheduled for Boat Dance Ceremony
The Bureau of Reclamation will increase releases from Lewiston Dam to the Trinity River in support of the Hoopa Valley Tribe's biennial Boat Dance Ceremony Aug. 22 in Hoopa according to a press release issued on Aug. 11. To account for travel time of water released from Lewiston Dam, releases will increase above the base summer flow of 450 cfs at 6 p.m. Aug. 20, and will reach a peak flow of 2,650 cfs between 10 a.m. and 8 p.m. Aug. 21. The releases will then gradually decrease back to the base summer flow about 4 p.m. Aug. 24.

The ceremonial flows are separate from the Trinity River restoration flows. The timing and flow rates from Lewiston Dam are preliminary and subject to subtle changes. People near or recreating on the river can expect river levels to increase and should take appropriate safety precautions. For more information, please contact Reclamation’s Northern California Area Office at 530-275-1554 or visit usbr.gov/newsroom/newsrelease/detail.cfm?RecordID=60266

Trinity River salmon trappings
As of Aug. 12, 48 adult Chinook salmon had been counted at the Junction City weir. Of those, 8 were hatchery fish. With the release of water from the dam starting next Saturday, the fall run kings should begin to make their way upriver.

Weekend Marine forecast
The ocean conditions haven’t been very pretty this week, and it looks like more of the same through the weekend. Out 10 nautical miles north of the Cape, Friday’s forecast is calling for NW winds 5 to 15 knots and waves out of the NW 7 feet at 8 seconds and NW 4 feet at 12 seconds. The wind picks up slightly on Saturday, coming out of the NW 10 to 20 knots. Waves will be NW 8 feet at 8 seconds. Sunday is looking a little worse, with N winds 10 to 20 knots and waves NW 9 feet at 9 seconds. These conditions can and will change by the weekend. For an up-to-date weather forecast, visit weather.gov/eureka/. To monitor the latest Humboldt bar conditions, visit wrh.noaa.gov/eka/swan, or you can also verify the conditions as reported by looking at the bar cam at wrh.noaa.gov/eka/barCam/?cam=humboldtBayBar. You can also call the National Weather Service at 707-443-7062 or the office on Woodley Island at 707-443-6484.

Pacific Halibut closed until Sept. 1
The Pacific halibut season closed on August 15 and will open back up on Sept. 1 and run through Oct. 31, or until the quota is reached, whichever is earlier. As of Aug. 13, the CDFW has projected 23,301 net pounds have been harvested towards a quota of 34,580 pounds. For up-to-date harvest tracking information, visit wildlife.ca.gov/Conservation/Marine/Pacific-Halibut#31670772-in-season-tracking

The Oceans:
Eureka
The oceans been rough since Sunday, keeping the fleet either tied up or inside Humboldt Bay reports Tim Klassen of Reel Steel Sport Fishing. He said, “The Pacific halibut bite was in a gradual decline. We went from limits, to three to two to none by Sunday. We’ve been fishing in the same general area where we got them last week, but for whatever reason, they just went off the bite. The tuna water is still sitting about 45 miles straight out, but we’ll have to see if these winds will start to tear it up. With the ocean being too rough, most of the action has been on the bay for California halibut. The bite has slowed a little, but there’s still plenty of keepers to be had.”

Shelter Cove
“We were able to make it north a few times this week for rockfish and halibut,” said Captain Jake Mitchell of Sea Hawk Sport Fishing. “The rock fishing at Rodgers Break was fantastic with limits every day. We also brought home a halibut each day fishing off Spanish Flat. We had a fair amount of salmon action on Tuesday, but only had two keepers to show for it. There were lots of short kings and some really nice silvers that kept us busy. The fish seem to be spread out from the whistle to the Hat. Some boats definitely did better than us, I think the top boat had eight.”

Crescent City
Quite a few halibut were caught over the weekend reports Chris Hegnes of Crescent City’s Englund Marine. He said, “The ocean was nice, and there was more effort on the halibut grounds. Some nice ones came in, the average size was around 30 to 50 pounds. Most of the action was out near the South Reef in 220 to 250 feet of water. We had a bunch of small anchovies pushed up right on the beach over the weekend, and it was pretty good fishing all around the harbor. The black rockfish were thick, and a few lings were caught as well.”

The Rivers:
Lower Klamath
The steelhead bite had been excellent on the Lower Klamath up until Sunday. The river colored up on Saturday night, presumably from the rain in the Trinity area, which made fishing a little tougher on Sunday and Monday. There’s plenty of steelhead in the river, both half-pounders and adults. Fishing should only get better from here on out as more fish enter the system.

A reminder that the Klamath River is now closed to Chinook salmon fishing. The Spit Area is closed to all fishing through the end of the year.