Joe Ferreira Retires After 24 Years With Fishing In The City

The California Department of Fish and Wildlife’s “Fishing in the City” program, now in its twenty-fourth year in the Sacramento area, is the best and most needed project that the Department has ever initiated, in my opinion.

Created to improve angling opportunities for the growing urban population in the nation’s most populous and most diverse state, much of the success of the program is due to the hard work, persistence and good nature of Joe Ferreira, the coordinator of the Program in Sacramento since it started up at Southside Park in the summer of 1993.

I was present at the Joe’s first fishing clinic at Southside – and I couldn’t miss his final day as coordinator. You see, after 39 years with the CDFW, Joe officially retired on Thursday, July 6.

The Department, through a private contractor, planted 2,000 pounds of channel catfish in the Howe Park Pond in Sacramento. It was the most heavily attended Fishing in the City event I have personally been to for a number of reasons.

First, it was on Free Fishing Day. Second, it was heavily publicized. And third, many volunteers and fishermen who have been with the program wanted to make sure they thanked Joe for his many years with CDFW.

When introduced to Sacramento and Southern California in 1993, novices and veteran anglers welcomed it alike. Up until that time, young anglers generally were introduced to fishing by the parents and guardians, grandparents, other relatives and friends. If you didn’t have parents or friends that were experienced anglers, you were often out of luck.

Even though Joe is leaving, the program is in good hands. Don Paganelli, a fishing guide who has been with Fishing in the City for many years, will be temporary coordinator of the program until the Department hires a permanent coordinator.

“It has been a really good experience working with the program,” said Joe. “It’s been a fun ride. Some people who fish the ponds also fish the Delta and other locations. But there are some people who just fish their neighborhood ponds – and this program offers them a chance to catch fish close to home.” 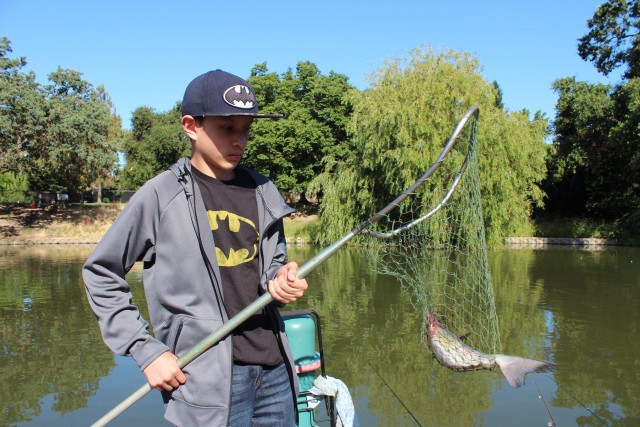 After retiring, Joe will be making one final appearance at the Granite Regional Park Pond fishing clinic on August 12. “But I will be there as a civilian,” he joked.

The fishing event will be a memorial to Tom Burrus, who passed away this year, and ran the event for years in conjunction with the Police Athletic League (PAL). A total of 2,000 pounds of channel catfish will be planted for the event.

“Normally, we don’t like to do kids only events because I’ve found that in teaching kids how to fish, they do it best in family groups,” Ferreira said. “However, this pond is very small and has limited space for anglers.”

He explained that during the fishing and conservation clinics that he has done for so many years, the adults will listen and then help the kids fish, based on the advice that Joe and others have given.

Robert Silva, the parent involvement coordinator for SETA Head Start Fatherhood Programs, commented during Joe’s last event as coordinator,  “It’s a great to see the amazement of a kid catching their first fish. I’ve been doing this for 15 years and Fishing in the City has been one of the mainstays of our program. Joes’s been wonderful to us over the years.’

Joe started as a seasonal aide with the CDFW at in 1978 at Crystal Lake Fishery Hatchery, and then worked with the Central Valley Fish Hatchery and Darrah Springs Hatchery.

He also did stints at Elkhorn Slough and the State Endangered Species Program. While coordinating the Fishing in the City Program, Joe has done outreach for the pike eradication program at Davis Lake from 1997 to 2008 and other projects.

The program has seen its challenges over the years. “The budget has stayed the same, but the costs of purchasing fish have gone up. We’ve been forced to do fewer deliveries of trout during the winter and catfish in the summer,” said Ferreira.

In spite of Department cutbacks and increasing costs of planting fish, the program has endured. Whereas the program used to stock a number of ponds in the Sacramento area with fish every week, the plants have become less frequent, but more fish are put in during the plants.

When I attended the first “Fishing in the City” event at Southside Park in Sacramento in the summer of 1993, I was impressed by the then new program and its mission of actually encouraging young anglers to fish as part of enjoying and appreciating the outdoors and practicing conservation.

Joe Ferreira was there with parks district officials, former City Councilman Jimmy Yee and a bunch of kids and some adults after the first plant of channel catfish in the lakes.

Since that inaugural event, I have attended over 60 of the program’s events, as well as fishing in a few of them. This program is one that actually increases angling opportunities, rather decreasing them or taking them away as California’s population continues to grow.

When I was a kid growing up in Sacramento, I had to figure out how to fish in local waters pretty much on my own. I would often travel to the American River by bike to fish for shad, steelhead and striped bass.

Nowadays, young and novice anglers have good opportunities to learn about fishing from angling experts in clinics, seminars and workshops provided by government agencies, fishing groups and bait and tackle stores, but no program equals “Fishing in the City.”

“Fishing in the City” gives city dwellers opportunities to both learn how to fish and to fish close to home. The CDFW and local sponsors stock ponds in urban areas with rainbow trout in the winter and catfish during the summer when the water temperatures are too high to plant rainbow trout.

Joe says the success of the program is demonstrated by the fact that many anglers who fish for a variety of species grew up as children in the program.

“I meet a lot of adult anglers in the Sacramento area who started out by coming to our clinics,” he said. “In fact, Dmitri, who grew up coming to our events and fishing local ponds, is now a scientific aide with the CDFW.”

However, none of the catches I’ve witnessed touches the 22 lb. white catfish that James Robinson of Sacramento pulled out of William Land Park Pond in March 1994, a catch that Joe documented with a photo. That fish is not only the state record, but also a world record for the species, according to the Freshwater Fishing Fall of Fame.

You can find out the schedule for clinics and lakes being planted by calling (916) 358-2872 or going online at: https://www.wildlife.ca.gov/Fishing-in-the-city/SAC.

Fishing In The City Facts

The program was created in 1993 to improve angling opportunities for California’s growing urban population. Consistent with trends across the country, California’s urban anglers identified a lack of free time as the primary reason why they don’t fish more or stopped altogether.

Many city and regional park lakes, ponds, and streams were all but forgotten as potential fishing sites and many lacked adequate facilities, staff, or fish to sustain a fishing program. Some suffered from non-source-point pollution and habitat degradation. All were surrounded by communities ready to provide the support necessary to create fishing in the city.

The program’s Fishing in the City Clinics gives city dwellers an opportunity to learn how to fish, and to fish close to home.  It also gives participants an opportunity to borrow rods, bait and tackle through the Tackle Loaner Program.

Ponds are stocked with trout in winter and catfish the rest of the year.   Anglers 16 years of age and older need to have a fishing license except for on Free Fishing Days.

For information about the Sacramento area Fishing in the City Program,, contact (916) 358-2872, https://www.wildlife.ca.gov/Fishing-in-the-city/SAC.

For information about the Fishing in the City program in the San Francisco and South Bay areas, contact Ethan Rotman: Ethan.Rotman@wildlife.ca.gov • (415) 892-0460

For general information about the program, go to: https://www.wildlife.ca.gov/fishing-in-the-city