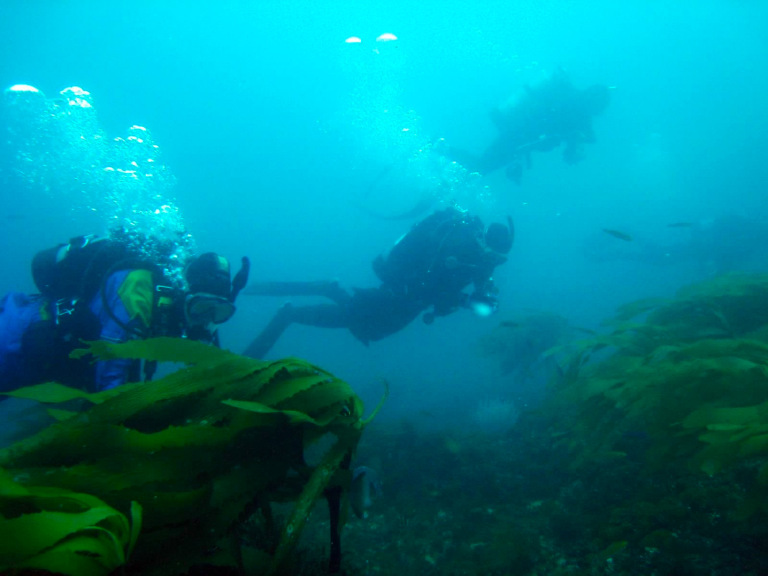 Question:What happens if a spearfishing diver spots a large fish and shoots and spears it without realizing until too late that it’s a giant (black) sea bass or another prohibited species? Then after the fish is speared and brought to the surface, the spearfisher realizes they have a fish they can’t take or possess, so they promptly return it to the ocean. Has the spearfisher violated any laws?

The reason I ask is because if an angler catches a prohibited species while fishing for other species, they can argue that the take was unintentional/incidental. Could the spearfisher successfully make a similar argument? (Steve H.)

A short lingcod or illegal giant sea bass, for example, is unlikely to survive after being shot by a spear fisherman who has the ability to select his target carefully first. On the other hand, while an angler fishing from a boat cannot selectively target which individual fish he wishes to catch, when he does catch a short or illegal fish, those fish are much more likely to survive being hooked in the mouth and then immediately released by the angler.

If a diver is unsure about the size or identity of the fish they are aiming at, the diver should choose a different target. Shooting a fish that you’re unsure of could end up being illegal, and many spear fishermen would consider it unethical as well.

These same principles also all apply to hunters. No one with a rifle, shotgun, spear gun or even a bow should pull the trigger unless absolutely 100 percent sure that their intended target is of legal size, species, gender, etc. An accurate (or even lucky) shot made, but with an error in judgment, is not worth the repercussions of breaking the very laws enacted to protect the state’s fish and wildlife.

Hunting with an Airbow
Question: Question: I have been learning about the Benjamin Pioneer Airbow and am curious about the legal status of using these for hunting. It seems to be the functional equivalent of a crossbow and so I would think they would be appropriate for general big game seasons where archery is a legal method of take. Does the California Department of Fish and Wildlife (CDFW) have a position on this innovative hunting tool? (Gregory Z.)

Answer: Airbows are essentially airguns that shoot arrows. They are not firearms nor are they (by definition) bows or crossbows (see California Code of Regulations Title 14, section 354). Game mammals and birds may only be taken by the methods listed in CCR Title 14, sections 311, 507 and 354. While firearms, bows and crossbows are all allowable methods of take, the airbow does not fall under any of these definitions, and thus may not be used to take wildlife in California.

Fine for no fishing license?
Question: Question: We are hunters and fisherman. My 24-year-old son has a fishing license but didn’t have it in possession, so when he met up with a game warden in the field, he got cited. Do you know how much the fine is? I thought you could lookup fine amount somehow. (Roy, Oroville)