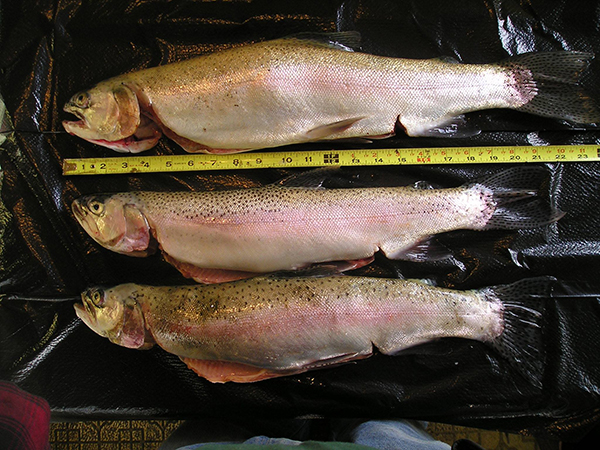 Thanks to Paul Brewer for this great fishing report!  I came up and fished yesterday to beat the bad weather. Checked out the ramp at Lightning Tree and saw one boat off the mouth of the channel. By the time I unloaded and came back to the ramp, he was gone and I didn't see another boat all day, only a couple of float tubers. Pretty close to having the area to myself.

I trolled the area in the cove close to the ramp for several hours with no action. Fishing had been good here when we stayed with you several weeks ago. I headed up the channel toward Fairview and picked up some action. I started out trolling in 10' of water or less for no bites. I picked up my first fish at about 12' depth and then the rest at anywhere from 12' to 22'-25'. My finder marked a lot of fish in this area although I have no idea as to species. It appears that the fish have moved from being in very shallow to a little bit deeper water. I caught two fish about 16" long, two at 20", and the biggest was 24". I've attached a picture of the three larger fish. I also broke off one larger fish and had a number of fish hit and not stick. Fairly steady action from about noon until 3:30 or so.