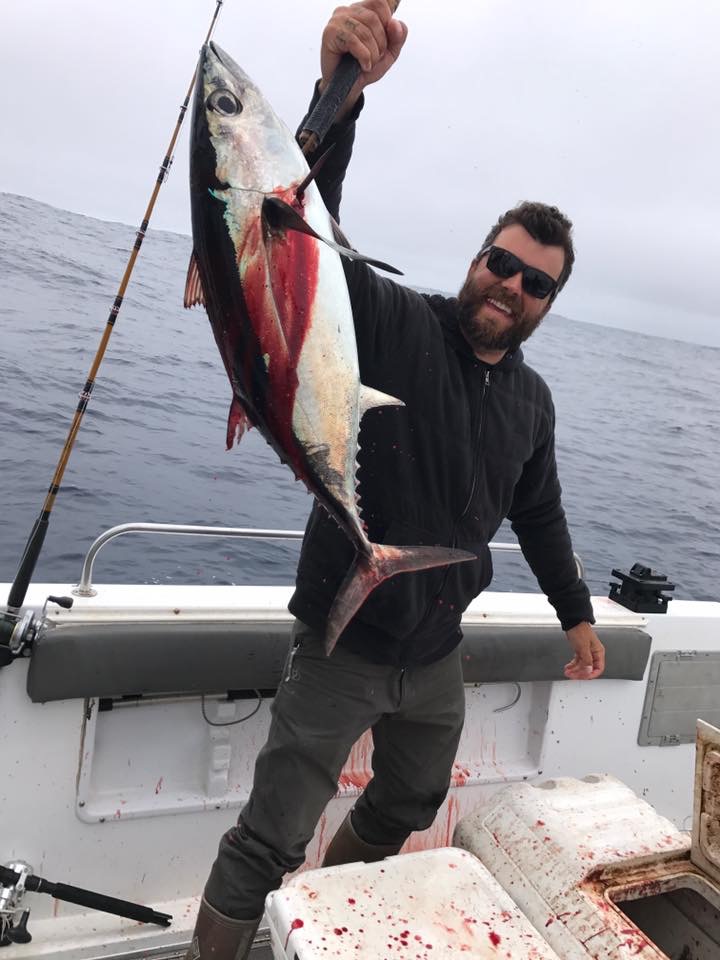 Captain Jake Mitchell of Sea Hawk Sport Fishing had a hunch, and it paid off in a big way. On Tuesday, despite a mediocre forecast, he ventured from Shelter Cove out to the Gorda Valley where the water was warm, and hopefully loaded with tuna. “The wind was forecasted to stay outside of the 125 line, so I figured it was worth a shot,” said Mitchell. “I had some pretty salty clients and let them know there was a good chance we may not make it out to the warm water. They didn't care, they wanted to catch a tuna. They've been coming to the Cove for eight years and have never caught one.” Mitchell pounded his way through some pretty sloppy conditions, and contemplated turning around at one point. But the weather slowly improved the further out they went. “Eventually we made it to the edge, which had pushed out a couple more miles then I expected. We trolled out through the break and into clear-blue 61degree water. We trolled for an hour and a half with no biters, and no signs of life, before we finally got a single. We spent the next couple hours boxing that area for four more singles and one double. Eventually that area dried up, so we moved on. Finally at about noon, we saw our first jumpers and got an eight-way out of them and landed seven. We finished up our day there with a couple more quads and a few singles. For the day, we boated 26 mid-grade albacore about 42 miles from the Cove on the edge of Gorda Valley.” Sometimes it pays to follow your hunch…

Weekend Marine Forecast
Not a lot of inshore wind this weekend, but the ocean conditions will be marginal at best. Friday’s forecast is calling for 5 to 15 knot winds out of the N and NW waves 5 feet at 6 seconds. Saturday is calling for NW winds 5 to 15 knots and waves out of the NW 7 feet at 7 seconds. Sunday’s forecast is roughly the same, with winds out of the NW 5 to 15 knots and waves 6 feet at 7 seconds. These conditions can and will change by the weekend. For an up-to-date weather forecast, visit weather.gov/eureka/. To monitor the latest Humboldt bar conditions, visit wrh.noaa.gov/eka/swan, or you can also verify the conditions as reported by looking at the bar cam at wrh.noaa.gov/eka/barCam/?cam=humboldtBayBar. You can also call the National Weather Service at 707-443-7062 or the office on Woodley Island at 707-443-6484.

Halibut season re-opens August 1
The Pacific halibut season will re-open on Tuesday, August 1 and will remain open through August 15. The season will open up again on Sept. 1 and run through Oct. 31, or until the quota is reached, whichever is earlier. Through July, the CDFW has projected 11,664 net pounds have been harvested towards a quota of 34,580 pounds. For up-to-date harvest tracking information, visit wildlife.ca.gov/Conservation/Marine/Pacific-Halibut#31670772-in-season-tracking.

Abalone season part 2
Abalone season re-opens on Tuesday, August 1 along the North Coast from the San Francisco Bay north. After being closed for the month of July, the season will remain open through October. Diving is legal from 8 a.m. to 30 minutes after sunset. The daily bag and possession limit is three. For complete list of  regulations, visit regulations.com/california/fishing/saltwater/invertebrate-fishing-regulations/.

Sport Crab season coming to a close
The 2017 sport Dungeness crab season in Humboldt, Mendocino, and Del Norte counties will close on Sunday July 30. The season will re-open on Nov. 4.

Tuna update
Shelter Cove wasn’t the only local port where tuna was caught on Tuesday. A boat from Fort Bragg made a 37-mile run to Noyo Canyon and loaded the boat with 47 albies. The warm water that had been sitting off of Eureka has reportedly broken up, but there’s a warm patch sitting off of Crescent City. When the wind and seas calm down, it should be game on with the tuna water in range of multiple ports.

The Oceans:
The ocean conditions out of Eureka continue to be borderline, with Friday and the weekend looking much the same according to Tim Klassen of Reel Steel Sport Fishing. “We were able to get offshore last Thursday, but that’s been it. The fishing was excellent at the Cape as always, and the quality of lings was outstanding. Limits came easy, with about a 15-pound average. The rock fishing is still lights out, and we landed some of the biggest blacks and vermillion I’ve seen. Most of the action has been in Humboldt Bay the last week, where the California halibut bite is still wide-open. The only time they’re a little finicky is when they are some big tide swings. They seem to bite better on the moderate tides. Drifting live anchovies in the middle and north channels is still the ticket.”

Trinidad
Before the weather picked up on Sunday afternoon, the ling cod bite had been epic reports Curt Wilson of Wind Rose Charters out of Trinidad. “Late last week and up until Sunday, the lings were biting like crazy. We had some pretty decent conditions, which helped. All the boats were getting limits. The rockfish are still going strong. On the flatter days, we seem to get a much wider variety. We haven’t had any problems catching our limits of blacks. The crabbing has slowed as they’ve started to molt. But we’re still able to send the customers home with ten each,” Wilson said.

Crescent City
The wind has been blowing and the oceans been rough, so it’s been pretty quiet up here reports Chris Hegnes of Crescent City’s Englund Marine. “A few of the local guys have gone and stayed close to the harbor, but it hasn’t been that good. Those in-close places get fished pretty hard. There hasn’t been many, if any, boats headed offshore. Once the wind quits we’ll start to see the effort pick back up, especially with halibut season opening back up on Aug. 1.” Hegnes said.

The Rivers:
Lower Klamath
The summer steelhead bite picked up this week for the few boats side-drifting roe, with the best bite happening from Blue Creek down. The salmon action in the estuary also picked up on Wednesday, with quite a few more fish caught. It’s been on the slow side, but now and then a boat will pick up three or four a day. Like any estuary fishing, you have to be there when they’re biting. There seems to be a decent bite first thing in the morning, then it becomes a tidal bite. The best time is typically a couple hours prior to high tide, but not always.