Mild weather at Frenchman Lake yesterday, cloudy, sunny, misty, showers, windy, calm, and a mid day rainbow. We saw it all. Because of the warmer conditions, there is no shore ice to speak of, and muddy conditions exist for the walk and wade angler. The good news is that there are still plenty of fish in the shallows, we found they are scattered for the most part, but some coves have more hanging out in the neighborhood than others. There were a fair number of very small black flying beetles that were active and the trout were keying in on them. Rising fish and targets in the early afternoon, and many were very selective. Another observation was that the trout were not staying in one particular spot within a cove, they were roaming quite fast from spot to spot, searching for those beetles.

Effective patterns were pheasant tails, Jay Fair stripping flies in fiery brown, and dandelion emergers in black (closest fly I had that matched the beetle). All flies were unweighted due to shallow water we were focusing on, many of the trout were in 6 inches to 3 feet of water. Fishing pressure was non existent, just a few bait guys at Salmon Egg shoal. Be careful on the drive up the canyon when freezing temperatures are present, some of those tight curves do not have guard rails. Time is running out on the little desert lake, get some before it's gone... 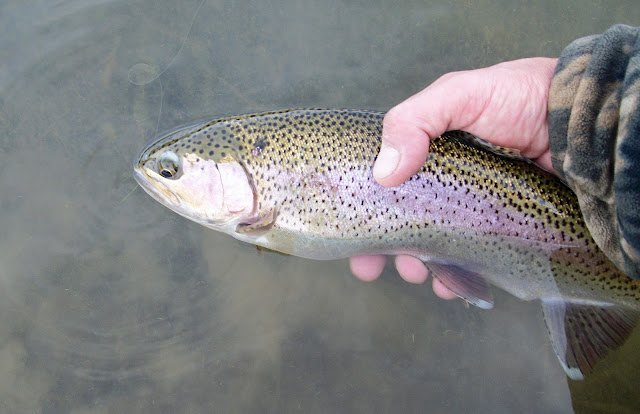