Fishing Pacific Halibut with a Buoy from a Kayak?

Fishing Pacific Halibut with a Buoy from a Kayak? 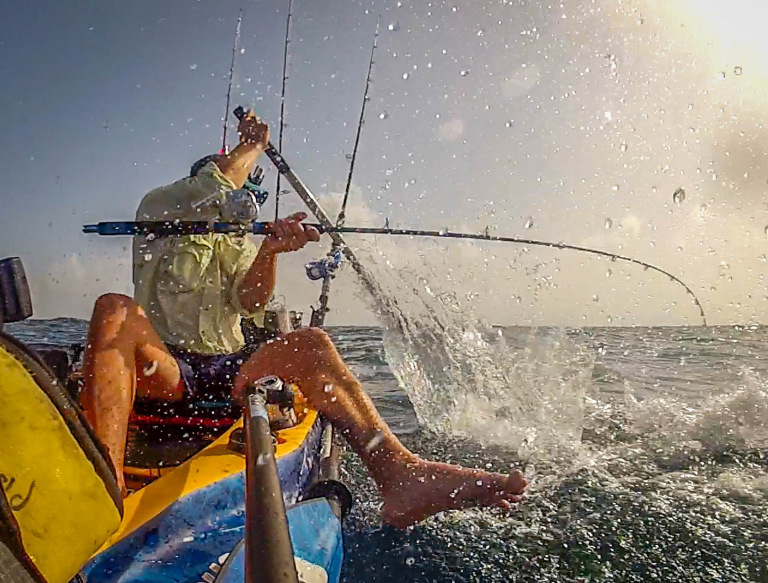 Landing Pacific halibut from a kayak can be very challenging, especially if not prepared with the right equipment. To ensure success, be sure to plan ahead!
Photo Credit: Eric McDonald
Courtesy of My Outdoor Buddy

Question: I wish to target large Pacific halibut from my kayak. I’ve researched several different methods for safely landing a large Pacific halibut from a kayak and have settled on a wireman’s gaff. A wireman’s gaff is a large 18/0 shark hook at the end of a 15-20 foot section of rope. The fish is gaffed with the shark hook and the other end of the rope is normally tied to a cleat – much like a flying gaff. From a kayak, this would be dangerous. Instead, I would tie the other end of the rope to an A1 buoy and throw the buoy overboard. The fish then fights the buoy, tires itself out, and then once tired it can be hauled in and dispatched safely.

My concern is that a hook on a rope attached to a buoy fits the description of “mousetrap gear” in the California Code of Regulations Title 14, section 28.65(f).

“Mousetrap gear prohibited: It is unlawful to use, assist in using, or to possess aboard any vessel, hook-and-line gear commonly termed ‘mouse traps’ constructed of a hook(s) or lure(s), attached to one end of a line that is attached to a float, or floats at the other end, and that when fished, is not attached directly to a person or vessel. Possession of such gear aboard a vessel shall be prima facie evidence that the gear is being used in violation of this regulation.”

Clearly, my intended use is not to fish with the wireman’s gaff as the line is too short to catch anything. The hook is never baited and it is never deployed without first being used to gaff a legally hook-and-line caught fish. Is the use of a wireman’s gaff in this way legal under the regulations? Do you think I would get a ticket if a wireman’s gaff attached to a buoy were in my possession? If it is not legal, is there a way to rig it to make it legal without tying a large agitated fish off to my kayak? (Doug K., Eureka)

“‘Snag’ or ‘gaff’ hooks are hooks with or without handles used to take fish in such manner that the fish does not take the hook voluntarily in its mouth” (Fish and Game Code, section 48).

There is no law that would prohibit your described method of gaffing a Pacific halibut. Many divers use similar devices with floats that detach from their spear guns while spearing large game fish.

Muzzleloaders in a wildlife area?
Question: The wildlife area I hunt states that rifles and pistols are prohibited, so most everyone hunts with shotguns loaded with slugs, or with a bow. Could I legally use a muzzleloader in this area? (Kyle B.)

Answer: Health advisories are usually issued by the California Department of Public Health (CDPH) and can be found several different ways. You can always check our health advisories website. This is updated whenever a new advisory is issued, though unfortunately we do not know much ahead of time when they will be issued. Links to more information about crab and domoic acid is available toward the bottom, in the Additional Information section. You can also call the CDPH shellfish hotline at (800) 553-4133, available 24/7.