The Lahontan cutthroat (Oncorhynchus clarki henshawi) is the largest growing trout native to North America, with early settlers around Nevada’s Pyramid Lake reporting fish up to 60 pounds. The current world record is a 41-pounder landed in 1925. Lahontans were an important food source for the Paiute tribe, but when white settlers arrived in the Great Basin in the mid 1800’s, the fish were vastly overharvested, with thousands of pounds being shipped across the West. By 1943, the Pyramid Lake population had been extirpated. However, recent developments suggest that the Lahontan giants of the big lake are on their way back.

Range and Life History
Lahontan cutthroats are native to the tributaries of what was once Lake Lahontan—a huge ice-age lake, of which Pyramid Lake and Lake Tahoe are remnants, in northwestern Nevada and extending into northeastern California and southern Oregon. These native waters include the drainages of the Truckee, Humboldt, Carson, Walker, and Quinn Rivers, as well as a few smaller streams. The species now inhabits a fraction of its former range, and both stocking and hybridization with other trout species have blurred the boundaries. For instance, Because it tolerates water too alkaline for other trout, Lahontan cutthroats are stocked in alkaline lakes outside its native range, including Lake Lenore in central Washington and Lake Mann in Oregon. 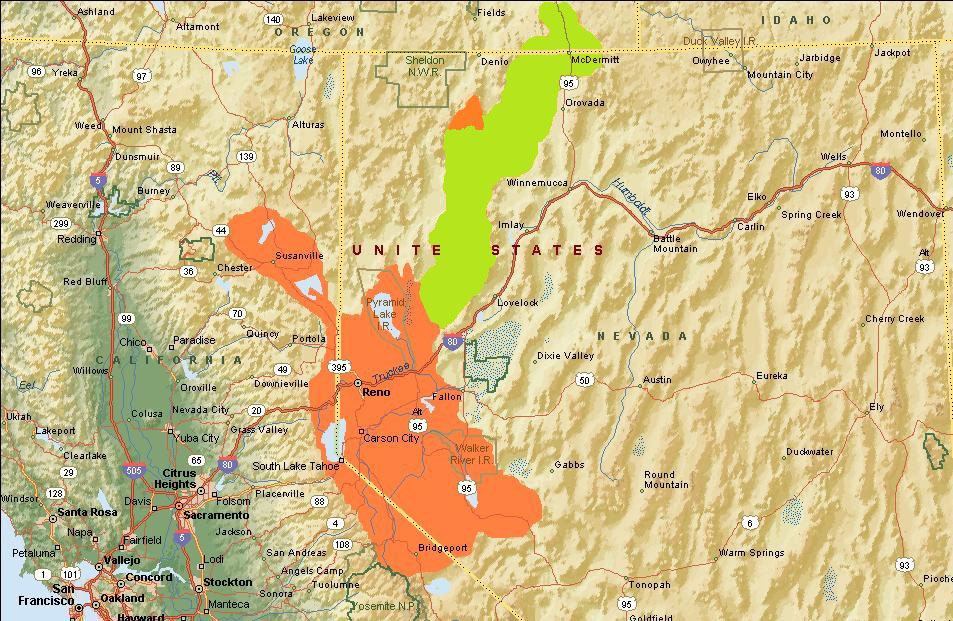 The native range of the Lahontan cutthroat.
Photo via nativetroutflyfishing.com

Populations in Pyramid and Walker Lakes are supported by fish hatcheries that raise strains from Summit Lake and Lake Heenan, but these fish do not grow as large as those fish native to the big lakes. However, a recent stocking of Pilot Peak Lahontans—believed to be genetically identical to the strain once believed extinct—seems to have been successful, which offers hope that the giant fish can make a comeback.

Lahontan cutthroats in lakes evolved into a large, long-lived species by feeding on large baitfish such as chub and suckers—some up to 16 inches long. The stream-dwelling populations adapted to a more standard trout diet of smaller fish and insects and therefore are not as large. Some experts believe that the Humboldt River population represents a separate subspecies.

As obligate stream spawners, Lahontans generally migrate from lakes between April and July, depending on flow and water temperature, although some fall spawning runs have been observed. Some 60 to 90 percent of spawning fish die in the process, while the rest may spawn again. Protection of their spawning habitat, once cut off by dams or degraded by poor grazing practices will be a key to future survival.


Man-Made Disaster
Lahontan cutthroats suffered virtually every indignity that man could throw at them, resulting in huge population crashes throughout the range. According to the USFWS, there were 11 lakes and 400 to 600 streams inhabited by Lahontans in 1844—numbers that have been reduced to five lakes and fewer than 130 streams. Aside from overharvesting, the Truckee River—the main spawning location—was dammed; Lake trout, brook trout, other cutthroat species, and rainbow trout were introduced to Lahontan waters; irrigation systems dewatered streams and lakes, and poor grazing practices led to the deterioration of stream habitat. Lahontan cutthroats were classified as an endangered species in 1970, although that was later relaxed to “threatened.”

An Unexpected Success
In the 1970s, the Paiute Tribe opened a hatchery and began stocking Pyramid Lake with Summit Lake strain Lahontans. This developed into a fine fishery, but the fish did not grow as large as the native strain once had. In the late ’70s, a biologist discovered remnants of the thought-to-be-extinct Pyramid strain in a tiny creek near Pilot Peak, on the border of Nevada and Utah. In 1995, USFWS biologists first harvested eggs from Pilot Peak and began rearing the fish in a local hatchery. Then, in 2006, they began stocking this strain in the big lake. Monster catches in the last couple of years point to the success of this project. In late 2012, an angler landed a 24-pound cutthroat, and several more 20-pounders have come to hand, as well. In May, the New York Times reported on this sudden reappearance of Pyramid Lake giants, and there is cause for hope that this trend will continue.

Techniques and Flies
The Pyramid Lake fishery is famous for anglers’ unique method of using a stepladder as a casting platform. In general, the fish patrol a series of drop-offs just offshore, often out of casting range for a wading angler. To achieve that extra distance—as well as to get their butts out of the chilly water—anglers hit upon the idea of using stepladders as casting platforms in the 1970s. The extra height is especially helpful for fly fishermen because it keeps the backcast from hitting the water, allowing for much longer casts.

The best fishing on Pyramid is March and April, but anglers start working the shallows on October first and fish right through the winter. Many anglers use a 200- to 300-gram shooting head to make long casts and get their flies down quickly. A tandem rig with a Woolly Bugger and a Popcorn Beetle is a popular setup.