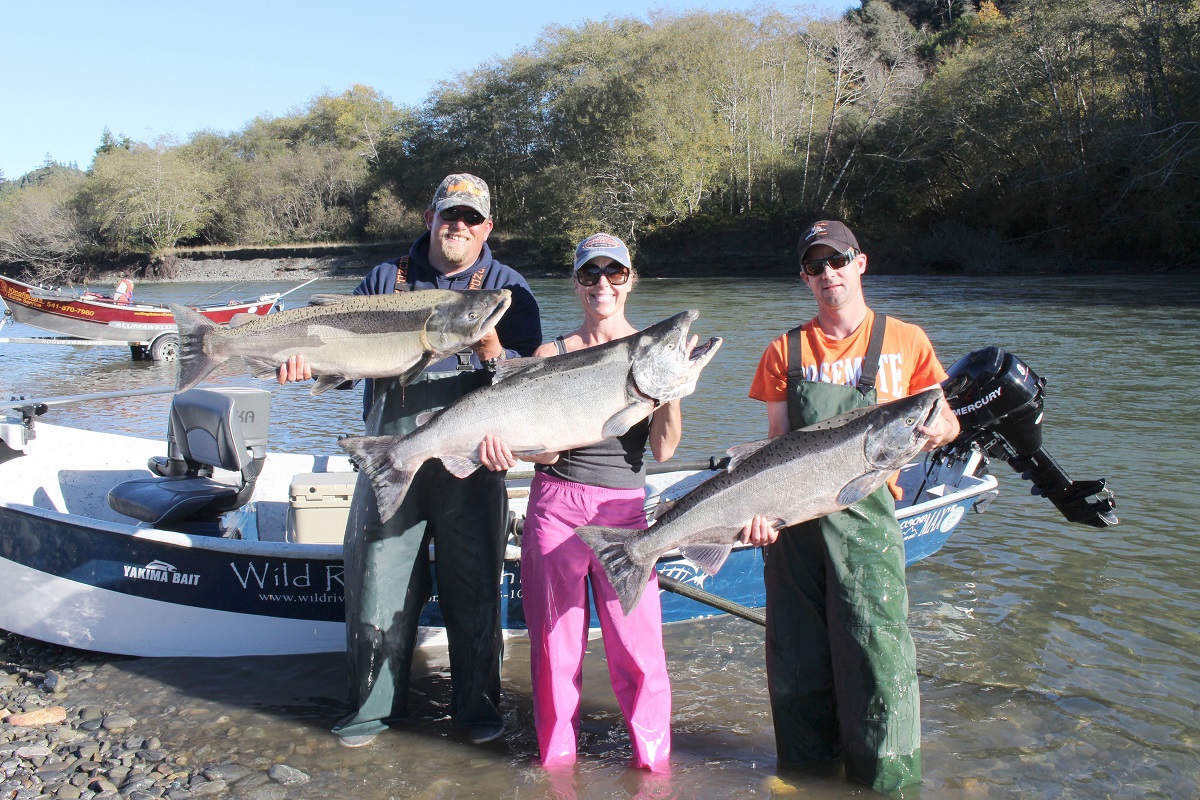 Last week, the Oregon Department of Agriculture and the Oregon Department of Fish and Wildlife announced an expanded closure of harvesting crab in all Oregon bays from the north jetty of the Coquille River estuary in Bandon south to the Oregon/California border due to elevated levels of domoic acid toxin. The closure includes the Chetco Bay and the ocean (which is already under a seasonal closure).

In addition, razor clamming from Cascade Head (just north of Lincoln City) is closed south to the Oregon/California border due to elevated levels of the domoic acid toxin.

The recreational harvesting of mussels remains open from the south jetty of Yaquina Bay (Newport) south to the Oregon/California border.

For keep apprised on shellfish closures and openings, call the Shellfish Information Hotline at 1-800-448-2474.

Bobber Fishing Rated an 8 in Chetco Bay Tidewater Holes
There's a lot of salmon in the Chetco!

For those who are in-the-know about bobber fishing in upper tidewater holes on the Chetco River, bobber fishing with sand shrimp, tuna bellies and floating banana plugs was rated a solid 8 on a scale of 1 through 10.

I hate using the words 'banana' and 'fishing' in the same sentence.  Just Google "bananas and fishing" and you'll see what I mean - you should get approximately 15 million hits on any given day.

Banana plugs are what we writers were once coerced to use by certain publications to describe lures such as FlatFish and Kwikfish.

But that didn't matter for guide Andy Martin last week when the Chetco rose to over 4,000 cfs last Sunday.  He managed to score his clients at least half-limits of Chinook every day since Sunday using a MagLip 5.0 underneath a bobber.

On the Chetco, anglers are only allowed one wild Chinook per day; 5 per season.

"I haven't been skunked on the Chetco yet," said Martin about his plug-fishing success. "But it's strictly bobber fishing now.  The river's too low to run a plug now," he said when the river dropped to 1,000 cfs.

"I like to use Pautzke Fire Cure and I'll use half red and half pink, and I'll mix them together," tips the guide. "It makes a better color for this clear water."

Barring any closures from ODFW, on next Saturday, November 4, the anti-snagging restriction will be lifted on the Chetco, and anglers will be free to deploy their favorite fishing method. So pray for rain, even if it's just enough to bring the river up to 2,500 cfs.

For the best mo, you gotta have flow.

Indian Creek Fish Showing on the Rogue River
Don't forget that the Curry Anadromous Fishermen of Gold Beach fin-clip and release over 75,000 Chinook salmon smolts annually at Indian Creek, a tributary of the Rogue River. This extra boost of salmon is designed to extend the fall Chinook fishery throughout the month of October.  This month, CAF's past efforts are paying off.

"I know there are fish at the (Indian Creek) hatchery," says Jim Carey of the Rogue Outdoor Store in Gold Beach. "They've counted around 150 so far."

Carey advises that anglers concentrate their efforts on the south bank of the Rogue just below Indian Creek, throwing spinners and spoons.

"A lot of guys will even go down around 700 feet from the mouth of Indian Creek toward the Highway 101 bridge and fish down there," recommends Carey.

The Mepps Flying C continues to be one of the better spinners, with the Rooster Tail running a close second.  Both silver-and-pink color combos work great, or just run a solid pink sparkle on your 1-ounce Rooster.

And then there are the spoon chuckers.

"When the wind comes up you can throw a (3/4-ounce) Kastmaster," notes Carey.  "It will cut right through the wind."

Anglers can also continue to troll spinnerbait/anchovy rigs in this area as well. Make sure that you are using your meter. There is a 700-plus-foot trough that you won't want to miss, where both the Rogue River and Indian Creek Chinook like to rest before journeying further up their respective rivers.

Indian Creek is located almost directly across from Lex's Landing.  The combination of expert fishing advice from Larry and the $5.00 launch fee is tuition well spent.

Larry Ellis, author, writer, columnist and photographer has had a 50-year passion for fishing in California and Oregon's saltwater and freshwater venues. He is a well-known writer for Oregon, Washington and California Fishing and Hunting News, Northwest Sportsman, California Sportsman and Pacific Coast Sportfishing. He currently writes monthly for Salmon Trout Steelheader Magazine, and is the weekly fishing columnist for "On the Water" for the Curry Coastal Pilot Newspaper. He particularly loves living in his hometown of Brookings, Oregon - The heart of salmon country and gateway to fishing paradise. Posted with permission of the Curry Coastal Pilot of Brookings, Oregon.
Source Link:
http://www.oregonfishreports.com/fish_reports/67883349/expanded-crabbing-closure-announced.php
Share Share on Facebook Pin it Pin on Pinterest
Back to Fish Blog - Reports and Info