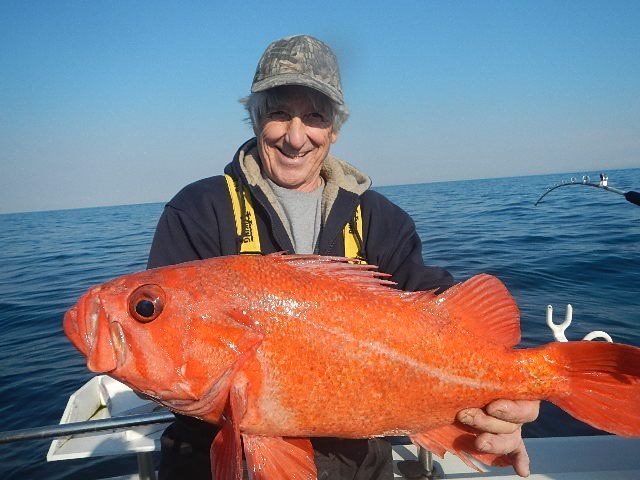 Last year’s drought-busting rainfall is starting to fade from the rearview mirror, while thoughts of the dreaded-drought are slowly creeping back into focus. I catch myself thinking back to three or four years ago, and what a tough time it was for our state, Humboldt County, and our fisheries. And then I remember, it’s only mid-December, and we’re one good storm away from being right back to normal. And then I read the weather reports, and they’re telling me the current dry spell will continue for who knows how long. Arghh….

It’s way too early in the game to even begin thinking about a drought, so I won’t. The reality of the current dry spell only means that some of the North Coast Rivers will soon be closed to fishing, effectively putting a hold on the impending winter steelhead season. The Van Duzen and South Fork Eel were the first rivers to fall victim to the “Ridiculously Resilient Ridge,” and the rest of the rivers are on a slow decent to closure as well. I sure hope everyone is enjoying the prolonged break in the storms, but I for one, am not.

More dry weather ahead
According to Brad Charboneau of Eureka's National Weather Service, the dry weather will persist for at least another week. “We’re stuck in a high-pressure pattern, and we’re not seeing a change anytime soon. We’re going to be dry through next week, and possibly longer.” Charoneau added.

Commercial Dungeness season delayed again
Based on the results of another round of pre-season quality testing conducted on Dec. 5, the director of the CDFW announced on Dec. 12 an additional 15-day delay for the upcoming commercial Dungeness crab season.  The tests continued to show that Dungeness crab are not yet ready for harvesting. The delay affects Fish and Game Districts 6, 7, 8 and 9 (Mendocino, Humboldt and Del Norte counties). The season in these districts is now scheduled to open on 12:01 a.m. Dec. 31, 2017, to be preceded by a 64-hour gear setting period that would begin no earlier than 8:01 a.m. on Dec. 28, 2017.

A third round of testing in areas not yet meeting the minimum will be scheduled with a target completion date of December 22. The Tri-State Dungeness Crab Pre-Season Testing Protocols specify that if any area does not meet the minimum meat recovery criteria (23 percent north of Cascade Head and 25 percent south of Cascade Head) a season delay is required and additional testing is necessary before a season opening date can be confirmed. If quality remains low, an additional delay until Jan. 15, 2018 will be issued by the director. This date is the latest the season can be delayed due to quality testing. More info can be found here.

Rockfish season to close Dec. 31
Pleasant ocean conditions the last couple weeks have allowed the boats still in the mood for rockfish to make the run south to the Cape, where the ling cod bite has been wide-open. Tim Klassen of Reel Steel Sport Fishing has ventured to the Cape a few times this month and reports a red-hot ling bite, and near-limits of rockfish. The season on the North Coast will close on Dec. 31. For more information about recreational groundfish regulations, visit wildlife.ca.gov/conservation/marine/groundfish.

2018 Oregon Groundfish regulations
Effective Jan. 1, 2018 through Dec. 2018, the bag limit adopted by the ODFW will be 7 bottom fish, including 5 rockfish and 2 ling cod. The fishery is open at all depths Jan. through March and Oct. through Dec. It will be open inside of 30 fathoms Apr. through Sept. For more information, visit myodfw.com/sport-groundfish-seasons.

The Rivers:
Chetco/Elk/Sixes
Fishing has been slow on the Chetco as we wait for the winter steelhead run to get going reports Andy Martin of Wild Rivers Fishing. He said, “There are decent numbers of half-pounders spread throughout the river, but not many adults. Salmon are few and far between, although there are a lot of dark fish in the upper section. Rain will help. The Elk and Sixes are low and clear. They could have a few fresh kings with the next rain but until then it is slim pickings there.”

Smith
The river is low and clear, and it’s been pretty quiet reports Mike Coopman of Mike Coopman’s Guide Service. “I don’t think many boats have been out, and I’m not hearing much in the way of steelhead being caught. We’ll need a decent rise to bring in some fish, but it’s still early in the season.”

Main stem Eel
The main stem is low, and starting to get pretty clear. The river is full of half-pounders from the forks down, along with a few adults. Most of the fish are in the deeper holes, anywhere there’s broken water. The flows were just above 1,000 cfs on the Scotia gauge on Wednesday afternoon and predicted to be around 850 cfs on Saturday. Minimum flows to keep the river open to fishing are 350 cfs on the Scotia gauge.

Mad
The river is holding some decent color, but there doesn’t seem to be a lot of fish around right now according to Justin Kelly of Eureka’s RMI Outdoors. “There haven’t been many anglers trying this week, likely due to the lack of fish,” said Kelly. “There’s a few fish trickling in, but for the most part it hasn’t been very good. The river despite being low, is holding some good color, especially in the deeper holes. We probably won’t see a good push of fish come in until the next rise.” As of Wednesday, the Mad was flowing at 450 cfs and dropping very slowly. It should remain open to fishing through the weekend. Minimum flows to keep the river open to fishing are 200 cfs at the gauging station at the Hwy. 299 bridge.

South Fork Eel and Van Duzen
Both rivers closed to fishing as of Tuesday, Dec. 12 due to low flows.