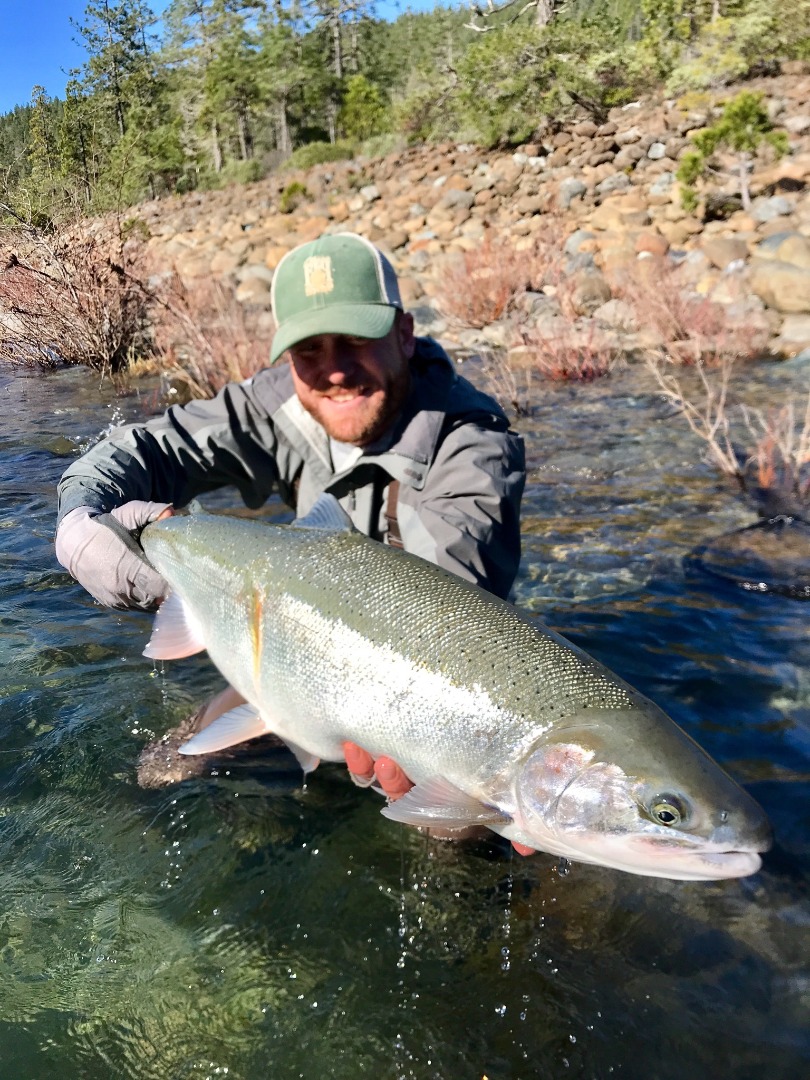 While the lack of rain has most steelhead anglers singing the blues, there are however, a few bright spots. Especially if you like to throw on a pair of waders and head to the river bar. The Mad River is probably as good now as it’s been all season. With plenty of bank access, it’s probably the best steelhead option at the moment. The river is on the low side, but the snowmelt has kept the color a beautiful shade of green. Chrome-bright hatchery steelhead are being caught by anglers working the river from the hatchery to the bridge. Both the South Fork Eel and the Van Duzen are getting too low for boats, but both have excellent bank fishing opportunities. Neither is chalked full of fish, but if you put your time in, a steelhead or two is not out of the question. You’ll want to cover some water, so comfortable wading shoes are a must. If you’d rather fish from a drift boat, you’re options are somewhat limited. The main Eel is your best bet as it still has plenty of green water. There’s also a real good chance of catching a few bright steelies. The Klamath and Trinity rivers are both good options as well. Both are green, and should have their share of winter steelhead moving through. With no substantial rain since the end of January, and very little predicted for the coming weeks, the coastal rivers are all headed towards low and clear conditions. But that doesn’t mean there aren’t ample opportunities to hook into a big ole’ winter steelhead.

The weather ahead
“We’re heading into a more active pattern, but it doesn’t look like we’re going to see a lot of rain over the next two weeks,’ said Ryan Aylward of Eureka’s National Weather Service. “We’re going to see some low elevation snow, but not much in the way of moisture. The systems will be coming down from the north, which if they stay inland we’ll see mostly snow. If they come down near the coast, they can pick up moisture and we could see some rain. The next system should arrive on Sunday, with snow levels around 1,800 feet. A quarter-inch of rain is expected, but it will likely fall as snow. Another half-inch is forecasted for Monday, but with snow levels dropping to 700 feet, we won’t see much rain. Unfortunately, the next couple weeks are looking like we’ll see below normal precipitation.”

CDFW’s Annual Salmon Information meeting
CDFW invites the public to attend its upcoming annual Salmon Information Meeting to learn more about the state of California’s salmon fishery. The meeting will be held March 1 from 10 a.m. to 4 p.m. at the Sonoma County Water Agency, 404 Aviation Blvd., Santa Rosa. The annual information meeting will cover the 2017 ocean salmon seasons, Central Valley and Klamath Basin river returns, and the 2018 abundance forecasts. Anglers are encouraged to provide input on potential fishing seasons to a panel of California salmon scientists, managers and representatives who will be directly involved in the upcoming Pacific Fishery Management Council (PFMC) meetings in March and April. For more information on the meeting, please contact CDFW Environmental Scientist Kandice Morgenstern at 707-576-2879 or visit www.wildlife.ca.gov/oceansalmon.

CDFW Seeks Input on 2018 Recreational Pacific Halibut Season Dates
The CDFW are inviting California anglers interested in the recreational Pacific halibut fishery to provide input via an online survey. The short survey, which will be open through Feb. 23, will help inform CDFW biologists about angler preferences for open fishing dates during the upcoming 2018 season. Results of the survey will be used to develop recommended season dates that will be provided to the National Marine Fisheries Service. The survey link is online at www.surveymonkey.com/r/LHHYJXG.

Free fishing days Feb. 17-18 in Oregon
It’s free to fish, crab or clam on the Saturday and Sunday of President’s Day Weekend, Feb. 17-18. During these two days, no fishing licenses or tags (including a Combined Angling Tag and a Columbia River Basin Endorsement) are required to fish, crab or clam anywhere in Oregon. Although no licenses or tags are required, all other regulations apply including closures, bag limits and size restrictions. For more information, visit dfw.state.or.us/news/2018/02_feb/020518.asp.

The Rivers:
Chetco/Elk/Sixes
“The Chetco is now at its lowest level of the season, and steelhead fishing is hit and miss,” said Andy Martin of Wild Rivers Fishing. “During the cloudy and rainy weather on Sunday most boats had at least a couple of fish. With clear weather on Monday and Tuesday it was slow again. There are fish but they are easily spooked right now. This weekend’s rain isn’t expected to increase flows much, but could get the fish in the river to bite better. Boat pressure has been light as most of the out of town guides have moved to other rivers. The Elk and Sixes are low, clear and slow right now and very few anglers are trying.”

Smith River
The Smith remains low and clear and in need of a good shot of rain. Flows were 7-feet on the Jed Smith gauge on Wednesday and dropping. Boat pressure has been light as most guides have moved to other rivers. There are reportedly a few fish around, but overall, fishing is tough.

Eel River (main stem)
The main stem is in great shape and holding a nice shade of green. Boat pressure was fairly heavy over the weekend, but has since slowed. Boats are averaging one to four fish per trip. There’s some nice adults in the mix and some bluebacks have shown up. There’s also a good number of half-pounders around. Flows are predicted right around 1,800 cfs by Saturday.

Eel River (South Fork)
According to Darren Brown of Brown’s Sporting Goods in Garberville, the river is low, but there’s still a few boats drifting. He said, “There were a couple boats at Sylvandale on Tuesday, but it’s definitely gotten quiet. Most boats have moved way down on the South Fork or to the main stem,” Brown added. Flows are predicted to be around 375 cfs on Saturday.

Van Duzen
The Van Duzen is getting skinny, with flows hovering around 275 cfs on Wednesday. A few fish were caught by boats earlier in the week, but it’s getting too low to drift. The water is clearing, but bank anglers are still finding a few fish.

Mad River
The Mad is in great shape and holding color reports Justin Kelly of Eureka’s RMI Outdoors. “The fishing definitely got better this week, seems like there’s more fish around now. All the deep holes are holding fish. The fish are scattered throughout the river, but from the hatchery to the bridge has been good. There’s a pretty good mix of both wild and hatchery fish around, and lots of bright ones in the mix too.’ added Kelly. ﻿100% handmade - Hand poured jig heads using a custom mold to accommodate heavy wire, super sharp, world famous Gamakatsu® hooks.  Individually powder painted and baked for ultimate toughness – these jigs come in unique, specialty colors not found in stores.   Hand wrapped in complimentary colors of marabou with the perfect amount of flash.  Each jig is hand crafted and hand tied, making each jig one of a kind.