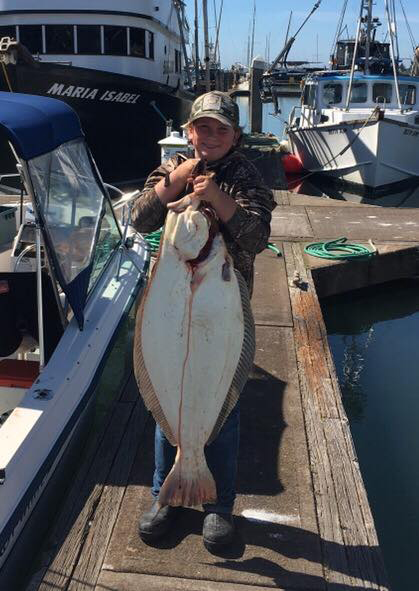 Eleven year-old Owen Peterson, of Arcata, nailed this dandy California halibut on Sunday while fishing with his father Andy. The big fish was caught on a live sardine and measured 44-inches and weighed 36-pounds.
Photo Credit: Andy Peterson

On Sept. 18, the Pacific Fishery Management Council (PFMC) voted to bring groundfish depth restrictions for the balance of 2017 back to 2016 depths in California from Pt. Conception to the Oregon border according to an Oct. 3 article in the Fish Sniffer Magazine. The reason behind the depth restriction is the yelloweye rockfish is predicted to exceed harvest guidelines. By allowing anglers to target deeper water, more yelloweye were caught and likely misidentified, leading to an over-harvest.

The restrictions will go into effect after the National Marine Fisheries Service (NMFS) publishes an official notice of the regulation changes, which is expected to be around Oct. 16 according to the CDFW website. The CDFW states on its website: “In-season changes to recreational regulations are pending, and expected to take effect in mid-October. Please check this webpage or call the regulations hotline at (831) 649-2801 for updates before engaging in fishing for groundfish. A press release should be forthcoming.

The article states that CDFW data suggests recreational anglers are in danger of exceeding their allowable take of 3.9 metric tons of yelloweye rockfish, due to the mortality of fish released or those kept by mistake. The groundfish depth restrictions in each region will revert back to those in the 2016 regulations. For the Northern Management Area, which includes all of Del Norte and most of Humboldt County, depth restrictions will go back from 30 fathoms (180 feet) to 20 fathoms (120 feet) for the remainder of the season ending December 31. For more information, visit the CDFW Marine Region Groundfish Central website.

For an up-to-date weather forecast, visit weather.gov/eureka/. To monitor the latest Humboldt bar conditions, visit wrh.noaa.gov/eka/swan. You can also call the National Weather Service at 707-443-7062 or the office on Woodley Island at 707-443-6484.

2017 Chetco River bubble fishery opens Saturday
The Chetco River fall Chinook bubble season, which will once again be halved and split over two weekends in 2017, opens on Saturday, Oct 7. The recreational season will be Oct. 7-8 and Oct. 14-15 so more anglers can take advantage of the weekend dates. The fishable area is within three nautical miles of shore between Twin Rocks and the Oregon/California border. The bag limit is one Chinook per angler per day. Minimum length is 28 inches and the terminal tackle is limited to no more than two single point barbless hooks. For more information, visit dfw.state.or.us/mrp/salmon/Regulations/docs/2017_Chetco_State_Waters.pdf

The Oceans:
Eureka
After some decent weather on Wednesday and Thursday, it looks like we’ll be off the water for the weekend reports Tim Klassen of Reel Steel Sport Fishing. “After not fishing for quite a few days, we finally got a break on Wednesday and were able to make it to the Cape. Friday is looking iffy right now, so we may be fishing in the bay for California halibut. There hasn’t been much effort in the bay lately, but the last report I heard was there’s still plenty of fish around,” Klassen added.

Another good week of salmon trapping in Willow Creek
“A big push of Chinook through the Willow Creek weir this past week, and they were not all jacks,” said Mary Claire Kier, an Environmental Scientist on the Trinity River who manages the Willow Creek weir. “We saw the first Coho of the season, and a couple of pinks as well. For the trapping week of Sept. 24 through 30, 337 Chinook jacks were trapped at the weir. To date, 673 jacks have been trapped compared to 69 for the entire 2016 trapping season. This past week, 295 adult Chinook were trapped, bringing the season total to 612. In 2016, only 459 total Chinook were trapped. Numbers picked up at the hatchery too, and Junction City is going to be trapping for one last week, the weir will be removed this Friday for the season.

Low Flow River Closures now in effect
North Coast rivers that are regulated by low flow closures, including sections of the Eel, Mad, Redwood Creek, Smith and Van Duzen are all closed to fishing as of Oct. 1 due to low flows. The Mattole, also falls under low-flow regulations, but doesn’t open to fishing until Jan. 1. For more information and up-to-date closure info, call the North Coast low-flow closure hotline at 707-822-3164 or visit wp.me/p3Qr6S-JM.

The Rivers:
Smith River
Chris Hegnes of Crescent City’s Englund Marine reports there are a few salmon being caught every day at the mouth of the river. He said, “I haven’t heard anything about the Piling and Sand holes, but I know fish are being caught at the mouth tossing Kastmasters and Cleo’s on the outgoing tide”

Lower Klamath
According to reports, there’s almost zero effort on the lower river right now, but the occasional boat is still getting into a few fish. Reportedly, they are having to work really hard for them. The few boats that are out are mostly fishing flies and spinners. There’s some moss around, but it doesn’t appear to be anything out of the ordinary.

Middle Trinity
There still aren’t many anglers out steelhead fishing, but I am hearing a few steelhead are being caught from Junction City to Douglas City reports Tim Brady of Weaverville’s Trinity Outdoors. He said, “The highway closures are making it tough for people to get to the upper sections from down river. The usual steelhead anglers are starting to trickle in, so we should start to hear more reports. The river is in great shape, so hopefully we’ll start to see some of the fish that are going through the Willow Creek weir start to show up.”

Lower Trinity
Fishing in the lower Trinity is probably your best bet for steelhead right now. Reportedly bank anglers fishing in the Willow Creek area over the weekend were putting up some pretty good numbers. There’s quite a few adults around as well as half-pounders. Lots of hatchery fish in the mix as well.