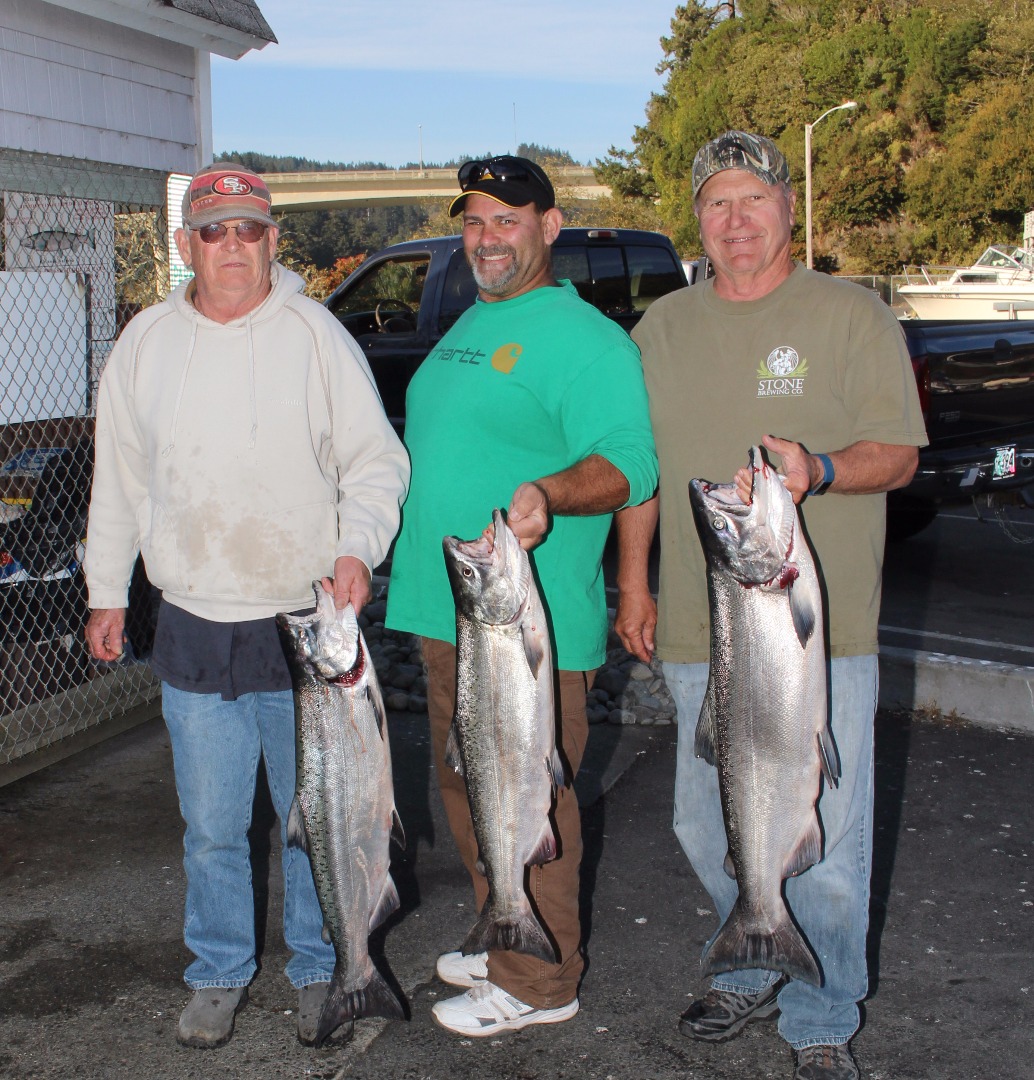 Dave Kuehn (right), president of the Oregon South Coast Fishermen fished the Chetco bubble fishery out of the Port of Brookings last week with two friends and limited out on Chinook.
Photo Credit: Larry Ellis

The first rains of the season have sparked Chinook to enter upper and lower Chetco River tidewater holes, with most of the kings pulling a pit stop at Social Security Bar.  Rain is expected throughout the weekend but not enough precipitation is expected to significantly raise the river for drift boats to deploy their techniques.

At the present time, the ground is soaking up the rain just about as fast as the drops of dew come down, so expect the main fishing techniques to be deploying bait such as tuna bellies and live sand shrimp underneath a bobber. There are several bank-fishing anglers catching salmon every day.

Until November 4, all fishing between rivermile 2.2 upstream to Nook Creek is under a bobber fishing or fly fishing 'anti-snagging restriction'. Refer to page 34 in the Oregon Sportfishing Regulations for precise gear restrictions and refer to page 16 of the same pamphlet for a photo demonstrating how to rig up.

Chinook have been entering the Chetco tidewater holes in waves, or pulses of schools. The first pulse of kings have been caught on the aforementioned bobber setups.  ODFW and Oregon South Coast Fishermen took advantage of this first burst of Chinook by seining at Social Security Bar last Tuesday.

ODFW's seine was filled to capacity with a total of 64 fish being counted. A combination of males and females were measured and taken to the hatchery truck to be transported to Elk River Hatchery.  Out of 35 fish, 33 were wild Chinook while 2 were hatchery females.

The forecast of rain by the weekend prompted ODFW to seine on the following Thursday as well. Once again, one seining operation loaded the net to capacity and ODFW began sorting out fresh chrome-bright kings to be sent to Elk River.

"We had 35 adult Chinook today," ODFW fish biologist Steve Mazur said on Thursday.  "Definitely some brighter fish moved in so we took a few brighter fish up to the hatchery. It seemed like there were fish spread all the way from Social Security Bar up to Jack's Creek, so it's looking pretty good. According to our numbers, we've got about 50 females and 20 males up at the hatchery."

ODFW's goal is to now raise 200,000 salmon smolts for the Chetco fishery. According to the average female fecundity, each hen should supply approximately 3,000 eggs, bringing the current total egg supply to approximately 150,000 eggs.

But ODFW will be seining again this coming Thursday, which should provide enough females to bring the total possible egg supply to over 200,000.

"We're going to go down again probably next Thursday," adds Mazur.  "We'll look at the weather; we might go earlier. Our goal is to get approximately 130 fish - 65 females and 65 males. Right now, we're doing pretty good. There definitely seems to be more females in the nets for sure."

The Chetco estuary fishing will continue to thrill anglers who are trolling spinnerbait/anchovy rigs or straight bait rigs, but if and only if there is no significant raise in river flow.

Right now it is looking like this week will be a good one for trolling the estuary, but Mother Nature might have her own plans.

Don't forget that crabbing in the ocean is now closed and won't reopen until December 1.

However, anglers may still crab to their hearts' content in bays and estuaries.  Fishermen throwing crab rings, snares and butterfly traps have been quite successful on the crab pier on the Brookings south jetty.

Depending on the luck of the draw, crabbers are catching anywhere from 3 to 12 Dungeness crab.  The limit is 12 male Dungeness crab with a minimum size of 5-3/4 inches as measured across the inside of the crab's points.

This is also the time of year when the Rogue starts kicking out its Indian Creek Chinook.  So the fishing on the Rogue Bay is winding down but is far from being over.