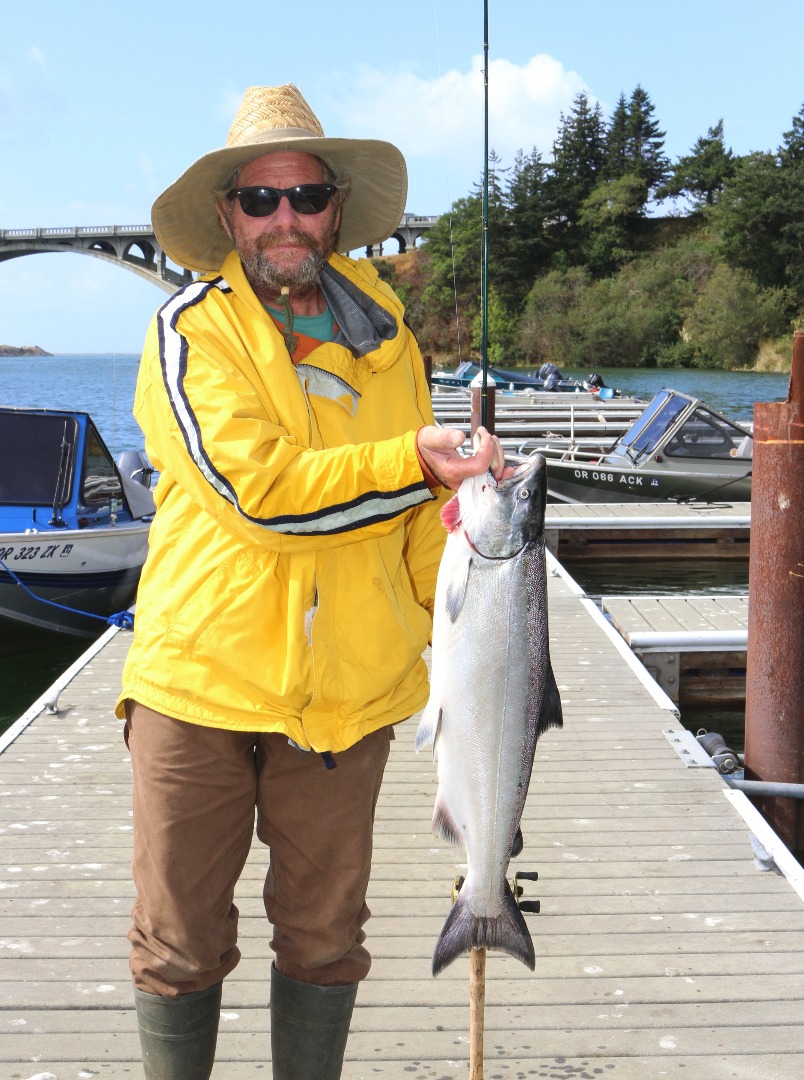 First come the smaller jacks, followed by the big buoys and gulls in late September and early October.

The Rogue River is also still kicking out its fair share of Chinook ranging from 12 to 42 pounds, with the average weight being between 15 and 18 pounds.

I fished last week with guide Jack Hanson and caught a nice 17-pound Chinook and a jack Chinook.  Hanson likes tying up his leaders between 6 and 7 feet long.

Tip of the week
"I like to get our rigs behind the boat about 35 feet," notes Hanson.

In order to get your rigs behind the boat at this distance, experiment using sinkers between 2-1/2 to 4 ounces.

While trolling, you're going to put your reel in free spool and while gently thumbing the spool, let out enough line until you feel your sinker bottom out.

After about 20 seconds, your sinker will come up from the bottom, at which time you are going to free spool your rig until you feel the sinker hit bottom a second time.

If after the third time, the sinker does not easily bounce bottom while letting out a few feet of line, put on a heavier sinker.

I constantly work my anchovy rig, letting out line on occasion to maintain constant contact with the bottom.  If the spool turns about one or two turns in order to maintain bottom contact, I know my sinker is just the right size. Of course in certain areas where the bottom either steepens or deepens, I will either reel in some line or let out more line accordingly.

I also like to maintain my rod in a rock-steady position, which might mean holding it in such a way that it does not move one iota.  This takes a lot of discipline in order to maintain the rod (and yourself) as still as a statue.

Only when the rod doubles over a few times with line coming off of the spool do I enter fighting mode.  If you pick up the rod while the fish is first mouthing the anchovy, you will lose the fish every time and it won't be back for seconds. So if you lack the self discipline to do this, then put your rod in a rod holder.

"We've got fish still being taken," says Jim Carey from the Rogue Outdoor Store in Gold Beach on Thursday.

According to Carey, the water temperature dropped last week in the bay and lower tidewater holes, which started putting the fish on the move.  For this reason, anglers are beginning to catch their fish at and upriver of Indian Creek.

"But we're supposed to have clear skies for a week," notes Carey. "And with that, it will probably start producing fish in the bay since we are seeing the Indian Creek hatchery fish move in too."

Every year, the Curry Anadromous Fishermen of Gold Beach fin-clips 75,000 Rogue fall Chinook, the returns of which are designed to return to the river in October, thereby extending the fishery for up to a month.

Larry Prestininzi, owner of Lex's Landing across from Indian Creek says that fish should be entering the system all of September and even into October. According to Prestininzi, a 42-pound monster was caught in his boat last week.

Susan from Jot's Resort reported that Tuesday and Wednesday were slower fishing days, but for the most part, everybody is limiting out. Nevertheless, a 38-pound king tipped Jot's scales in the beginning of the week.