CDFW to Release a Half-Million Steelhead into Feather River 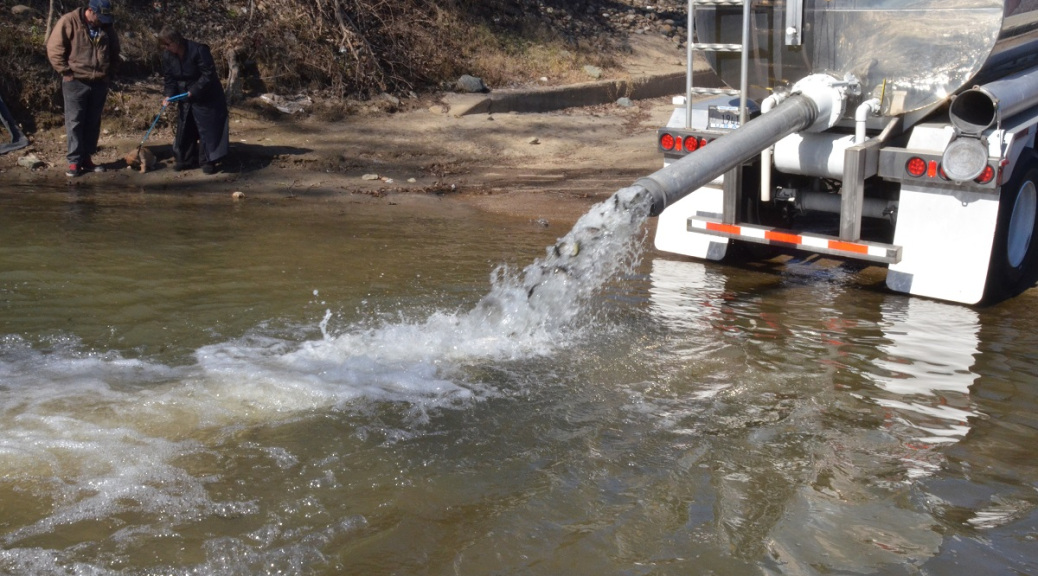 Steelhead being released into Feather River. Photo courtesy of CDFW

More than a million steelhead eggs were endangered in February 2017 when silt and debris overwhelmed the hatchery water system following the spillway failure. With less than 72 hours to complete fixes on aeration and filtration systems CDFW engineers went to work to save the steelhead eggs stacked in hundreds of trays at the hatchery.

Feather River steelhead are on the state and federal list of species of concern, and the hatchery is key to maintaining the viable run in the Central Valley. The eggs in the hatchery during the Feather River spillway event represented a year-age class of steelhead.

Engineers redesigned the water in-flow system using city water for the incubating steelhead. They also brought in massive six-foot-tall charcoal filters to purify the city water and reconfigured the aeration system. These alterations made this week’s release of more than 500,000 steelhead possible.

“CDFW engineers did something that had never been done successfully before on a massive scale,” said Feather River Fish Hatchery Manager Anna Kastner. “The eggs were in a fragile state of incubation and could not be moved, so innovation was the only option. The use of city water for incubation paid off.”

CDFW Engineers George Heise and Beth Lawson, working with hatchery personnel, pathologists and biologists, conferred on the requirements of redesigning the system.  Once agreed upon they went to work.

“Our options were limited and something had to be implemented immediately. The team told us what they needed and we went to work making it happen,” Heise said.

Thousands of anglers fish these waters annually, significatnly boosting the local economy. Finding an emergency fix for the potential catastrophic loss of a year of hatchery production of steelhead was critical – recreationally, economically and biologically.

John Church, a local fisherman from Yuba City, is one of the many anglers who value and rely on steelhead fishing opportunities on the Feather River. “It’s really important to me and family … I take my daughters to the Feather River for the chance to catch a steelhead each year,” he said. “It is what we go there for.”