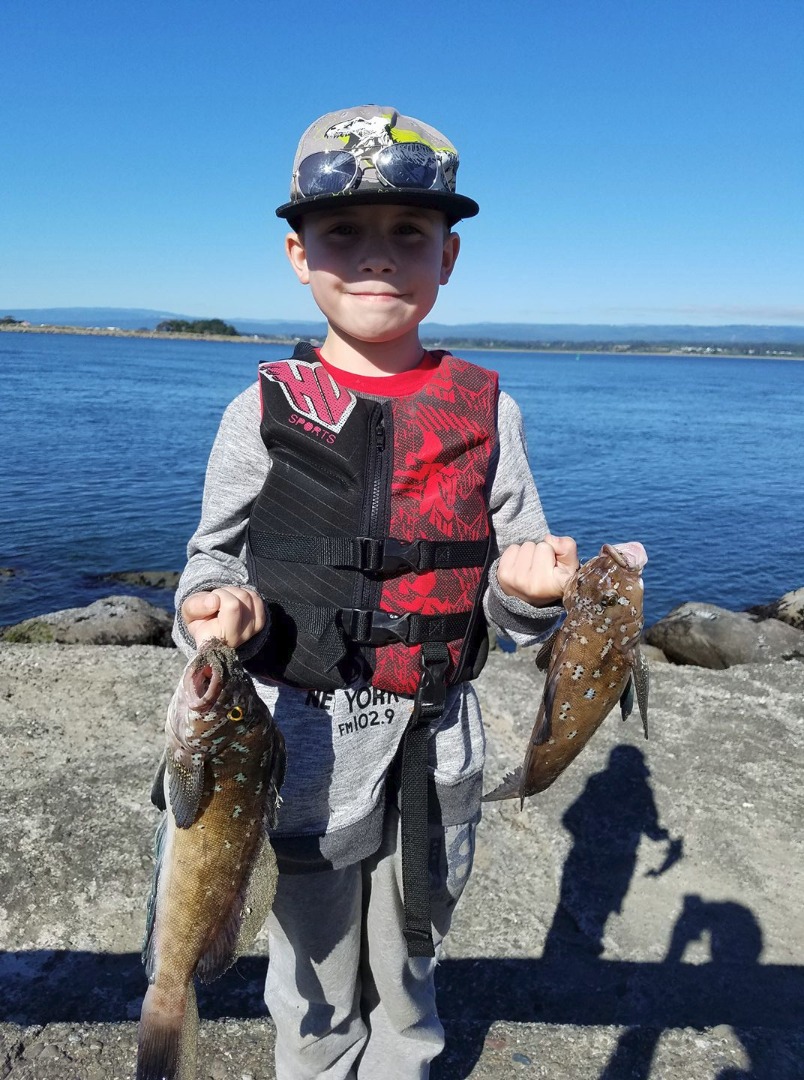 Fortuna resident Nathan Graham landed a nice pair of female Rock greenlings on a recent trip to the south jetty. In the Northern Management Area, which runs from the CA/OR border to Cape Mendocino, rock fishing is open year-round to shore-based anglers and divers.
Photo Credit: Joe Graham

Rockfish, Pacific halibut, tuna, and even salmon. It’s been an arduous wait, but we finally have a variety of offshore options to choose from along the North Coast. And a pretty nice ocean to boot. The Pacific halibut season opened back up on Tuesday, but the ocean and the halibut weren’t fully cooperating for the Eureka boats. They were reportedly biting pretty good in Trinidad however. After being stuck inside the bay or not fishing, boats finally made their way easily to the Cape, where the fishing remains lights-out. Tuna is currently all the rage from Fort Bragg to Eureka. A few Fort Bragg boats did really well on Tuesday, with a much larger fleet expected on Thursday and Friday. The warm water is currently sitting about 28 miles off of Noyo Harbor. There’s also a good chunk of warm water sitting about 20 miles off of Cape Mendocino, which is where you’ll find the Shelter Cove and Eureka boats on Friday. The recreational salmon season for Fort Bragg and Shelter Cove is on the horizon, opening back up on Aug. 15. Always good to have options.

In the meantime, spring-run regulations are in effect on both rivers. Chinook fishing will be allowed through Aug. 14 on the Klamath downstream of the Highway 96 bridge. On the Trinity, fishing is open downstream of the Old Lewiston Bridge to the confluence of the South Fork Trinity River through August 31. The limit is two kings of any size on both rivers. After these dates, both fisheries will be closed for salmon for the remainder of the calendar year. Important Reminder: During the salmon season closure, steelhead angling will still be allowed in both the Klamath and Trinity rivers. Where fishing is allowed, the daily bag limit is two hatchery steelhead. For the complete list of Klamath/Trinity regs, visit nrm.dfg.ca.gov/FileHandler.ashx?DocumentID=147891

Shelter Cove/Fort Bragg salmon seasons set to reopen
The recreational salmon season from Horse Mtn. to Point Arena will reopen on Aug. 15 and remain open to Nov. 12. The minimum size limit is 20 inches total length with a daily bag limit of 2 salmon of any species except Coho. For more information, please visit the Ocean Salmon webpage at wildlife.ca.gov/oceansalmon or call the Ocean Salmon Regulations Hotline at 707-576-3429.

Weekend Marine forecast
We’ve finally have some decent ocean conditions, which should stick around through the weekend. Out 10 nautical miles north of the Cape, Friday’s forecast is calling for NW winds to 5 knots and waves out of the NW 3 feet at 8 seconds. Saturday is calling for NW winds 5 to 10 knots and waves NW 3 feet at 4 seconds and NW 3 feet at 9 seconds. Sunday’s conditions are looking similar, with winds out of the NW 5 to 10 knots and waves 4 feet at 5 seconds. For an up-to-date weather forecast, visit weather.gov/eureka/.  To monitor the latest Humboldt bar conditions, visit wrh.noaa.gov/eka/swan. You can verify the conditions as reported, by looking at the bar cam at wrh.noaa.gov/eka/barCam/?cam=humboldtBayBar. You can also call the National Weather Service at 707-443-7062 or the office on Woodley Island at 707-443-6484.

The Oceans:
Eureka
Another weekend of rough ocean conditions, but that’s all starting to change. Tony Sepulveda of Shellback Sport Fishing broke the ice and made his way to the Cape on Monday in so-so conditions. The fishing, as usual, was wide-open with limits of big lings and rockfish reported. More boats headed that way on Tuesday and Wednesday and the reports were more of the same. Pacific halibut opened back up on Tuesday, and it sounds like the few who fished didn’t put much of a dent in the quota. Look for the bite to pick up as the ocean continues to improve. “The warm tuna water is sitting off of Gorda about 45 miles from the jaws,” said Tim Klassen of Reel Steel Sport Fishing. “Conditions look great for Friday, I’m sure a lot of boats will be running from Eureka. Hopefully the water will continue to move a little closer to us. The California halibut bite is still going strong in Humboldt Bay, there still seems to be lots of them around.”

Trinidad
Curt Wilson of Wind Rose Charters reports the rockfish and halibut bite is getting good with the improved ocean conditions. He said, “The ocean has laid down, and the fish are biting. When it’s calm, we’ve been able to score a pretty wide variety of rockfish, including lots of blues. We should start to see the ling bite improve as well. The halibut fishing has been really good since the opener, with plenty of limits to be had. Most of the fleet are fishing straight out and maybe a little south in 100 to 200 feet of water.”

Shelter Cove
“Rock fishing was mediocre this week and it took us some time to get limits,” said Captain Jake Mitchell of Sea Hawk Sport Fishing. “I ran for tuna on Tuesday and found the edge at 30 miles. We only boated eight, it just didn’t seem to be our day. They were getting them pretty good off of Fort Bragg, but by the time I figured it out it was too late for me to run down there. The weather looks great the rest of the week, so we’ll be chasing tuna.”

Crescent City
“I haven’t heard of any halibut caught the last couple days, but we should see more effort now that the ocean is calm,” reports Leonard Carter of Crescent City’s Englund Marine. He said, “The rock fishing continues to be excellent when the boats have gotten out. The weekend should be really good. We also have some 60-degree water sitting offshore about 25 miles just outside the 125-line. I’m guessing we’ll see a few boats venture out for tuna.”

The Rivers:
Lower Klamath
The bite on the Lower Klamath was hit and miss this week for both salmon in the estuary and steelhead upriver. It seems to be feast or famine at the moment. The salmon bite in the estuary was pretty good on Monday and Tuesday, then fell flat on Wednesday. The summer steelhead bite has been decent, with boats getting three to five hookups per day working the river from Blue Creek down to the Glen. Water temps are on the rise, and in some locations, it’s approaching 75 degrees.