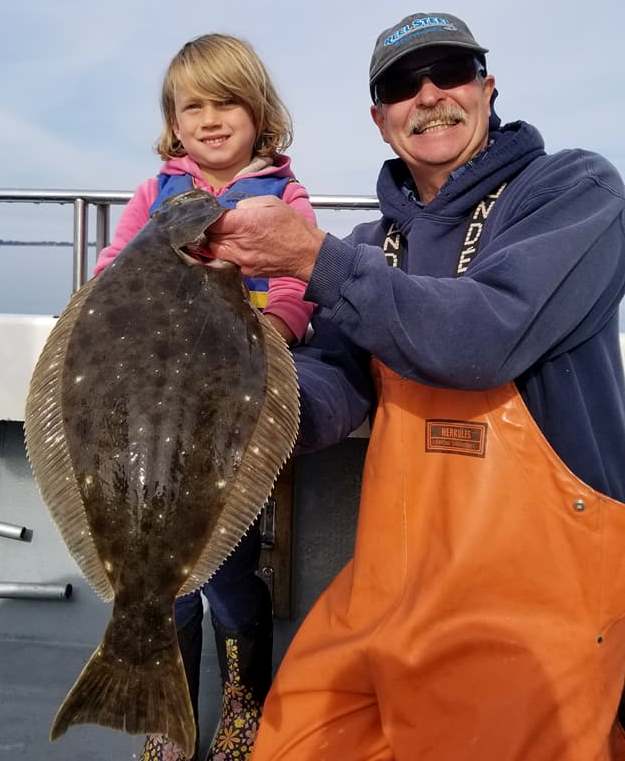 If you thought the California halibut season was belly up, you may want to reconsider. The effort has definitely tapered off over the past few weeks, but the bite remains as strong as it’s been all season. “We fished over the weekend, and it was as good then as it’s been all season,” said Tim Klassen of Reel Steel Sport Fishing. “It’s every bit as good now as it was two months ago. There are still lots of shakers in the mix, but they are keepers as well. The one consistency we’ve had all season is bait in the bay. There’s been a good mix of anchovies and sardines around, which is one of the reasons the halibut have stuck around. We’ve been fishing further up in the channels, but I think they are still spread throughout the bay. The one thing I’ve seen all season is they bite much better when we have the smaller tide swings, which we had last weekend.” According to Klassen, about the only thing that can slow the bite is the rain. Once the freshwater infiltrates the bay, both the halibut and the bait will likely head back to the ocean. The recreational fishery for California halibut is open year-round. The daily bag and possession limit is three fish, with a minimum size limit of 22 inches total length.

Rain on the way
According to Ryan Aylward of Eureka’s National Weather Service, we should see some rain beginning on Thursday. “We’ll see most of the rain on Thursday, but showers will likely linger into early Friday. Another weak system is forecasted for Saturday, but it shouldn’t amount to much rainfall. Rainfall totals for Thursday through Saturday should reach two inches in the Crescent City area, with more falling in the hills. In the Eel basin, we should see anywhere from a half to an inch of rain. Right now, next week is looking dry, with a weak system potentially forecasted for next weekend,” Aylward added.

Weekend Marine Forecast
As of Wednesday, the weekend marine forecast isn’t looking very fishable. Saturday, SE winds are forecasted 10 to 15 knots with waves W 12 feet at 14 seconds. Winds will decrease quite a bit on Sunday, up to 5 knots coming out of the NW with W waves 11 feet at 13 seconds. These conditions can and will change by the weekend. For an up-to-date weather forecast, visit weather.gov/eureka/. To monitor the latest Humboldt bar conditions, visit wrh.noaa.gov/eka/swan, or you can also verify the conditions as reported by looking at the bar cam at wrh.noaa.gov/eka/barCam/?cam=humboldtBayBar. You can also call the National Weather Service at 707-443-7062 or the office on Woodley Island at 707-443-6484.

Chetco bubble season wrap-up
The Chetco Bubble Season ended up being a big success according to Andy Martin of Wild Rivers Fishing. “According to ODFW, 530 fish were kept during the four-day season,” said Martin. “That's above the 300-fish allocation, but a sign a lot of fish are holding off the mouth right now. The first weekend had 1,009 anglers, a substantial effort, and big economic boost for Brookings

The Rivers:
River Closures
As of Thursday morning, all the North Coast rivers subjected to low flow fishing closures, including the Eel, Mad, Redwood Creek, Smith and Van Duzen are closed. Sections of rivers that are open include the main stem Eel River from the paved junction of Fulmor Road to its mouth, the main stem Mad River from the Hammond Trail Railroad Trestle to its mouth and the main stem Smith River from the mouth of Rowdy Creek to its mouth. The Department of Fish and Game will make the information available to the public no later than 1 p.m. each Monday, Wednesday and Friday as to whether any river will be closed to fishing. The rivers can be opened up at anytime. The low flow closure hotline for North Coast rivers is 707-822-3164.

Chetco
With the bubble season closed, anglers are now focusing on the estuary reports Martin. “I ran a trip Monday and my crew hooked five kings and landed three. We lost one to a sea lion. On Tuesday, ODFW seined the Chetco at Social Security Bar for the hatchery collection. There are a ton of fish there. There were 34 adult kings kept for the hatchery and another 50 released from a single pull of the net. There are a few hundred more fish in that hole alone. There should be a lot of fish upriver this weekend after the expected rain,” added Martin.

The Chetco is currently open to salmon fishing to Nook Creek. From the power line crossing at RM 2.2 upstream to Nook Creek (RM 14) from Sept. 1 through Nov. 3, angling is restricted to fly angling and bobber angling only, with 1 single point hook. Fly angling gear must include a strike indicator. Bobber angling gear must include a bobber and a leader no longer than 36 inches in length. Any weight (except the bobber or strike indicator) may be no more than 36 inches from the hook when suspended vertically. The leader below the bobber or strike indicator must remain suspended in the water column and not resting on the river bottom. The daily/seasonal bag limit is 2 Chinook daily, only one may be unclipped. 20 seasonal, no more than 5 may be unclipped

Smith
Britt Carson of Crescent City’s Englund Marine reports the mouth of the Smith is giving up quite a few salmon. He said, “I’ve seen quite a few caught this past week, with a gold/copper 3/4 oz. cleo being the top producer. The Sand Hole has a few fish in it as well, and guys are catching a few there tossing cleo’s and kastmasters. Even with the low flows, there’s a few fish as far as Ruby Park. With the rain coming later in the week, the salmon should really be on the move.”

The Smith is predicted to rise to just over 800 cfs on Friday morning, but will be back under the 600 cfs threshold by late evening. The next system is forecasted to push the flows to 1,300 cfs by noon on Sunday. To find out if the river will open to fishing, call the low-flow closure hotline at 707-822-3164.

Trinity
“There are definitely some fish in the system, with a mix of both salmon and steelhead,” reports Steve Huber of Steve Huber’s Guide Service “I’m seeing a few salmon up on beds for the first time in a couple years, and we’re seeing good numbers showing up to the hatchery. Even with the river dropping to 300 cfs over the weekend, the river is fishable from the top all the way down to the Klamath. Quite a few steelhead are being taken on flies, we’re catching most of our fish on natural cured roe and plugs. There’s still some one-way controlled traffic in the Junction City area due to the fires, making things a little slow to move around. Some weather’s coming in this week, which will definitely help the fishing. The flows are predicted to go up to about 500 cfs.