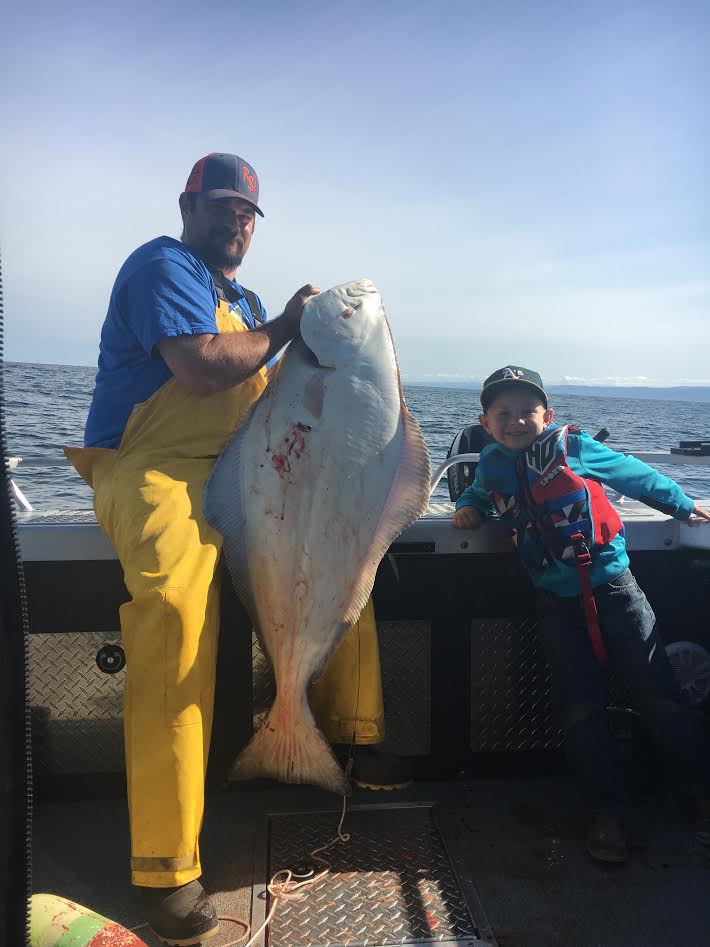 Chico resident Scott Brewer, along with his son Brody, landed this 51-pound halibut out of Trinidad on June 15. The Pacific halibut season, which has been closed the last two weeks of June, will re-open on Saturday July 1 and will remain open through July 15.
Photo Credit: Scott Brewer
Courtesy of My Outdoor Buddy

On one of the most popular holidays for anglers looking for a little offshore adventure, it looks like the ocean may be a little lumpy for the weekend. Inland anglers who are considering making the long trek to Humboldt to enjoy our beautiful, coastal weather and to hit the ocean will want to pay close attention to the marine forecast just in case it changes for the worse. Saturday marks the re-opening of the Pacific halibut season, but conditions are looking less than ideal with seven-foot seas forecasted. And making the trip south to Cape Mendocino for some rockfish looks iffy. If you’re hellbent on halibut and rockfish, Trinidad is likely your best bet. There’s no bar crossing to worry about, and it’s a short run to the fishing grounds. Targeting California halibut within Humboldt Bay is also a good alternative if it’s too rough to get outside. The Klamath River is producing a few spring salmon, and we have three lagoons that offer a variety of trout and bass. Don’t let a little wind and rough seas spoil your long holiday weekend.

Weekend Marine Forecast
According to National Weather Service, Friday’s marine forecast is calling for winds out of the NW 5 to 15 knots and NW waves 5-feet at 6 seconds and NW 2 feet at 10 seconds. Saturday forecast is for N winds 5 to 15 knots, with waves out of the NW 7-feet at 7 seconds and W 3-feet at 11 seconds. Sunday the wind is forecasted to blow 5 to 15 knots out of the NW. Waves will be NW 7-feet at 7 seconds. These conditions can and will change by the weekend. For an up-to-date weather forecast, visit www.weather.gov/eureka/. To monitor the latest Humboldt bar conditions, visit www.wrh.noaa.gov/eka/swan, or you can also verify the conditions as reported by looking at the bar cam at www.wrh.noaa.gov/eka/barCam/?cam=humboldtBayBar. You can also call the National Weather Service at 707-443-7062 or the office on Woodley Island at 707-443-6484

Halibut season re-opens July 1
The Pacific halibut season will re-open on Saturday, July 1 and will remain open through July 15. The remainder of the seasons open dates are: Aug. 1-15 and Sept. 1-Oct. 31, or until the quota is reached, whichever is earlier. To date, the CDFW has projected 7,833 net pounds have been harvested towards a quota of 34,580 pounds. For up-to-date harvest tracking information, visit https://www.wildlife.ca.gov/Conservation/Marine/Pacific-Halibut#31670772-in-season-tracking

Saturday is statewide free fishing day
On Saturday July 1, people may fish California's waters without a sport fishing license. All regulations, such as bag and size limits, gear restrictions, report card requirements, fishing hours and stream closures remain in effect. On Free Fishing Days, every angler must have the appropriate report card if they are fishing for abalone, steelhead, sturgeon, spiny lobster, or salmon in the Smith and Klamath-Trinity River Systems. For more information visit, https://www.wildlife.ca.gov/Licensing/Fishing/Free-Fishing-Days.

Abalone season closing
Abalone season will close Friday, June 30 and will be closed for the entire month of July. It will reopen on August 1. For more information, visit https://www.wildlife.ca.gov/Conservation/Marine/Invertebrates/Abalone

Fort Bragg tuna
A few boats made the run out of Fort Bragg on Sunday and Monday and were rewarded with the season’s first albacore. The warm water was roughly 30 to 40 miles straight out, but was an easy ride across a flat ocean. Scores ranged from 5 to 22 with most of the fish in the 12 to 20-pound range. The wind started to blow late Monday and the weather window is closed for now. The next opportunity could come towards the middle of next week.

The Oceans:
Eureka
“Fishing remains excellent down at the Cape, with easy limits of both rockfish and lings coming on every trip,” said Tim Klassen of Reel Steel Sport Fishing. “The lingcod fishing is fantastic, and we’re catching a wide variety of rockfish too. A few halibut were also caught and released this last weekend. The weather for the halibut opener on Saturday isn’t looking great. Seven-foot seas are predicted, which is almost too big to effectively fish for halibut. When it’s that bouncy, it’s tougher to keep your bait in the strike zone long enough for them to bite. Inside Humboldt Bay, the California halibut are still biting, with lots of undersized ones around with some nice keepers mixed in.”

Trinidad
“There’s lots of rockfish around, and the lings are biting too,” said Curt Wilson of Wind Rose Charters. “We’ve been spending most our time south of Patrick’s Point. There’s definitely some good spots out there, we’ve caught some nice lings and a pretty good variety of rockfish this week. The crab traps are still stuffed with keepers, and the customers are going home with limits every trip,” Wilson added.

Shelter Cove
“We spent the last few days targeting rockfish at Rodgers Break and Gorda,” said Captain Jake Mitchell of Sea Hawk Sport Fishing. “Overall the fishing was pretty slow, but the quality was really good. We had 17 vermillion on Sunday. We managed limits the first two days, but came up a few rockfish short of limits on Monday. The three black limit has been making it a bit more challenging to achieve a ten-fish limit and we really had to work for them this weekend.”

Crescent City
According to Chris Hegnes of Crescent City’s Englund Marine, the rockfish bit really well over the weekend, but fell flat on Tuesday. “I heard good reports from the weekend, and I was out there myself and it was good. Boats fishing the Sisters, South and Big Reefs all found good action on a variety of rockfish and lings. And for whatever reason, the bite just died on Tuesday. The wind was picking up on Wednesday, but I’m hoping the ocean will be nice enough for the halibut opener this weekend,” Hegnes said.

Klamath/Trinity regulations
A reminder that spring-run regulations are still in effect on both rivers. Chinook fishing will be allowed through Aug. 14 on the Klamath downstream of the Highway 96 bridge. On the Trinity, fishing is open downstream of the Old Lewiston Bridge to the confluence of the South Fork Trinity River through August 31. The limit is two kings of any size on both rivers. After these dates, both fisheries will be closed for salmon for the remainder of the calendar year. Important Reminder: During the salmon season closure, steelhead angling will still be allowed in both the Klamath and Trinity rivers.

The Rivers:
Lower Klamath
The springer action for boats anchored on the lower river has slowed down since the beginning of the week, but some fish are still being caught daily. Hopefully we’ll see a few more spurts of fish move through. Now is typically the time when boats start switching over and begin trolling the estuary. I haven’t heard of any fish caught as of yet, but it should take off soon.