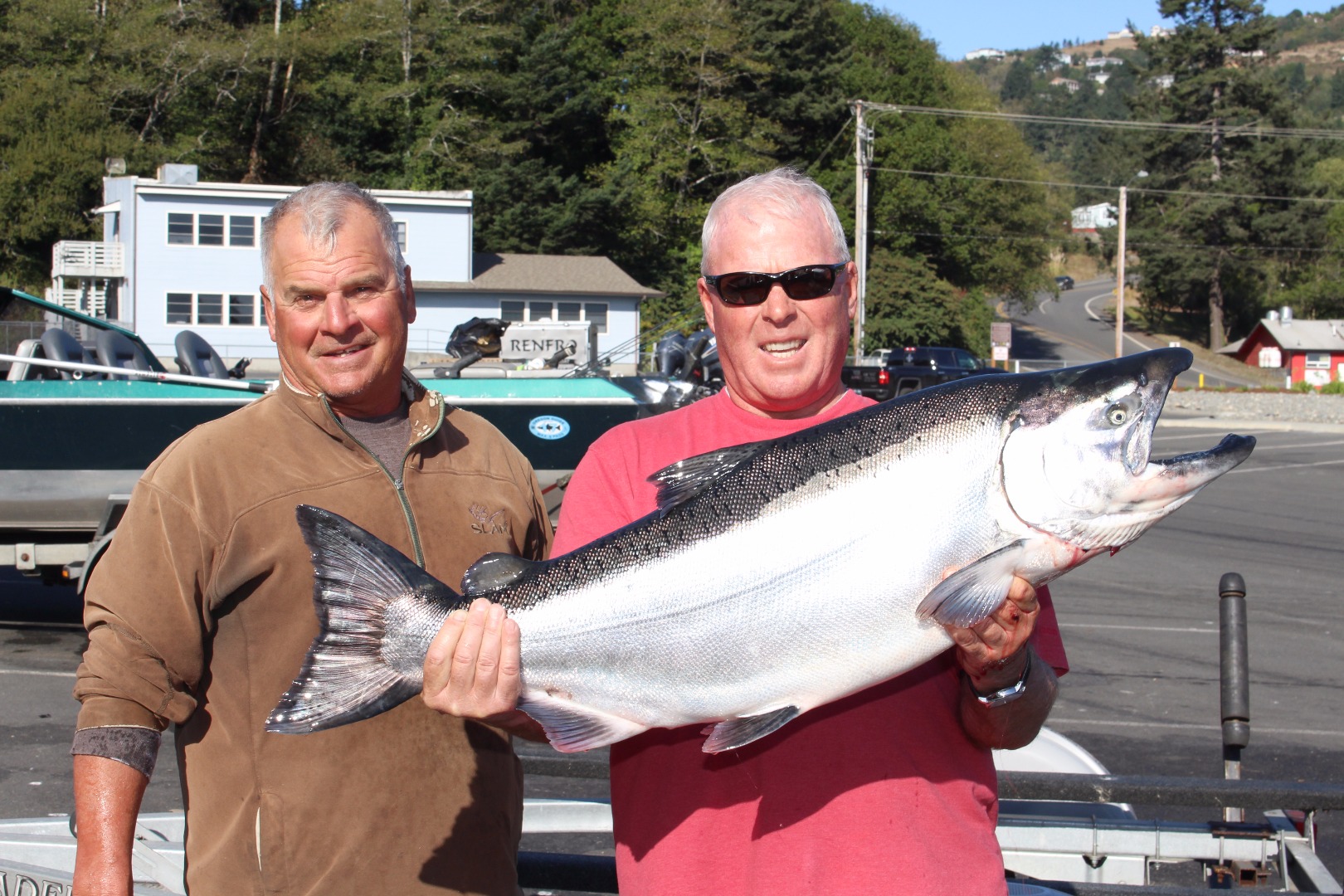 Anglers have been chomping at the bit to fish for a salmon in the ocean. Recreational fishermen in southern Oregon will get their first chance to do that today, October 7 when the Chetco Fall Chinook State Waters Terminal Area Season opens one hour before sunrise.

Also called the Chetco Bubble Fishery, the boundaries are from shore outward to 3-nautical miles, and from Twin Rocks south to the Oregon/California border. There are several things to note on this fishery.

First, it takes place in the ocean.

Second, it's a barbless hook fishery.

Third, the minimum size for Chinook is 28 inches.

And fourth, the boundary between the Chetco River and the ocean must be strictly adhered to.

It is important to note that when you first head out to sea paralleling the two jetties, you are actually heading south, not west.

Because the salmon fishing in the Chetco estuary has been very good at times, people are saying that the bubble fishery should also be at least equally as good.  Those fish that were caught in the bay last week had to come from somewhere and that 'somewhere' is the ocean.

That being said, these fish could be anywhere, but more than likely they will be fairly close to shore or the jetties, waiting to head upriver.  When a front approaches, the fish huddle up closer to the jaws.

This is basically a trolling fishery that deploys the use of downriggers. My favorite places to troll are paralleling Sporthaven Beach, the Salmon Rock area and in approximately 120 feet of water uphill from the whistle buoy, a place known as Salmon Alley.

Also, since the bay fishing has produced several fish over 40 pounds, I would not be surprised one bit if a 50-pound king was caught in the bubble fishery this year.

More than likely, you will want to be trolling fairly close to the bottom, however suspended fish in the bubble fishery are not unheard of.

So pray for good weather this weekend.  If things turn sour, the red can buoy will suddenly be known as Boat City.

Remember that if you catch a coho in the ocean, you have to let it go.  This time of year the coho will be between 15 and 20 pounds, so their immense sizes will sometimes fool the most seasoned veterans.  So be sure to look at the lower jaw on the inside of the fish's mouth.  There is a great picture of a coho's mouth on page 95 of the sportfishing regulations for identification purposes.

Fishing Still Good in both the Chetco and Rogue Bays
Anglers trolling straight bait and spinnerbait/anchovy rigs are still managing to coax a few monster kings to the net in the Chetco River and the action will continue until the first fall rains raise the river considerably, after which it will switch to an upriver fishery.

The fishing has been hit and miss.  One day the fishing is spotty while the next day there is almost a fish per boat.

The Rogue Bay has also been surprisingly good for this late in the season. Both Chinook and coho salmon have been brought to the net.  Remember that you can only keep a hatchery coho that is missing an adipose fin.

"We're still catching salmon in the Rogue Bay," remarked Larry Cody from the Rogue Outdoor Store in Gold Beach on Thursday.  "I was talking to Mark Van Hook earlier in the day and he said, 'We just landed a 35-plus (Chinook)'. In fact last week the biggest fish was well over 45 pounds."

Most fish were caught trolling a spinnerbait/anchovy rig or trolling straight bait.

Long-Leader Rock Fishing Regulations Revised By ODFW
For those who like to catch rockfish using long-leader techniques, ODFW has revised their regulations on long-leader fishing which can only be used outside the 40-fathom curve.

The first change is that ODFW increased the limit from 7 rockfish to 10 rockfish.  ODFW is encouraging this mid-water fishery to target suspending rockfish species such as yellowtail rockfish, widow rockfish and canary rockfish.

Except for the blues and deacons, the aforementioned prohibited rockfish species are rarely caught outside of 40 fathoms (240) feet by using suspended long-leader gear, but in the rare event that one should be caught, descending devices must be used to release them.

By increasing the bag limit from 7 to 10 fish, ODFW hopes to sell the long-leader fishery to recreational sportfishermen and charter boats to help make up for the sudden lackluster economy.

For a description on how to make a long-leader outfit, visit this  website:    dfw.state.or.us/MRP/regulations/sport_fishing/docs/longleader_FAQ_2017.pdf