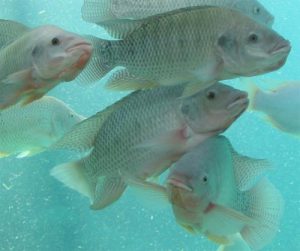 The fish shown in this picture are tilapia. These warm water fish, native to Africa, cannot tolerate cold water temperatures below 55 degrees. When lake temperatures fall below 55 degrees, then tilapia most often die. This situation occurs during normal or cold winters and generally lasts a few weeks to a month. Tilapia are found in many Community Fishing Program lakes.

There is no public health risk. Cold water temperatures cause the immune system of tilapia to fail. Consequently, dying tilapia are commonly found covered with a cottony fungus that other, healthy fish can resist. All other fish such as trout, bass, bluegill and catfish are not affected and are safe to keep and eat. These other fish are healthy and are fully capable of adjusting to seasonal changes in water temperatures.

Public can help with data collection for AZGFD cormorant study

In early 2017, AZGFD began a study of the state’s two species of cormorants – neotropic and double-crested cormorants – both of which are federally protected under the Migratory Bird Treaty Act. Under those protections, cormorant populations have flourished nationwide, competing with other wildlife for a bounty of local fish at Community Fishing waters and privately stocked residential lakes.

As part of that research, in late summer AZGFD placed numbered, colored tags on the wings of birds near the Ocotillo and Sun Lakes communities in south Phoenix. More birds will be safely trapped, tagged and released across the metro area and in other areas of the state in the future. The public can help with the data collection by noting and reporting as much of the following:

Once collected, information can be entered at www.azgfd.gov/cormorantsurvey on any computer or mobile device or by leaving a message with details at 623-236-7301.